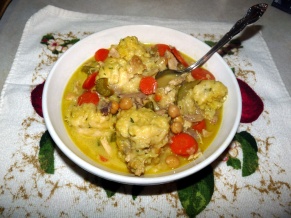 My P.S. (Personal Shopper/hubby) stopped by my office the other day after he made his rounds of his favorite stores.  He was excited to show me a new container he’d found for me.  This was a great idea!  I take a container of yogurt and some granola to work. The container of yogurt is full to begin with so I can’t just dump in my granola.

The container my P.S. found would condense it all down to one for transporting AND eating!  What a super idea!  The container is in three pieces plus a 2-part plastic spoon that snaps under the insert.  I keep a spoon at work so probably won’t bother with that plastic one.  But it is cute! And in pink, my favorite color!  I have no excuse not to have a healthy lunch at work; it fits into my big purse very nicely.  (We’ll talk big purses another time!)  I totally recommend buying the Sistema Klip It container. I would look for it on sale; the original price is a bit much for a plastic container.  My P.S. paid under $4. 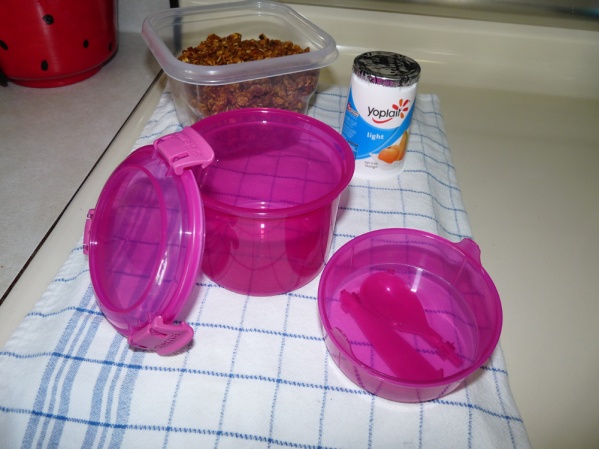 Monday was a busy day.  Not only had I made my yearly batch of Jambalaya for our Mardi Gras meal on Tuesday, I made curried chicken and dumplings for supper for my P.S. and myself.  I found the recipe on The Chew, one of my guilty pleasure cooking shows.  I get so many great recipes from that show and adore the chefs.  Carla Hall is my favorite, she’s so fun and wacky you can’t help but be charmed.  And this curried dish just happens to be Carla’s.

The next modification was a result of how we usually eat our supper in the evening.  We have funky tv trays we use in front of the television, where we catch up on our cooking shows.  My P.S.  works at 2:30 am so it’s the only hour we have most nights to watch tv together.  Sitting in a lowly lit room to eat, it was difficult to pull the chicken off the bones while it’s covered with the curry sauce and chick peas and carrots.  Just too messy for my taste.  I decided the chicken needed to be removed from the bones after frying.

I fry the chicken on the stove in a large frying pan until done, let it cool, then remove all the chicken from the bones in pieces and shreds.  Last night my P.S. stripped the bones for me.  He’s handy that way sometimes!

You can prepare the chicken earlier in the day or even the day before.  Then to prepare the rest of the ingredients is just a matter of chopping the veggies, frying them until the carrots are beginning to soften. 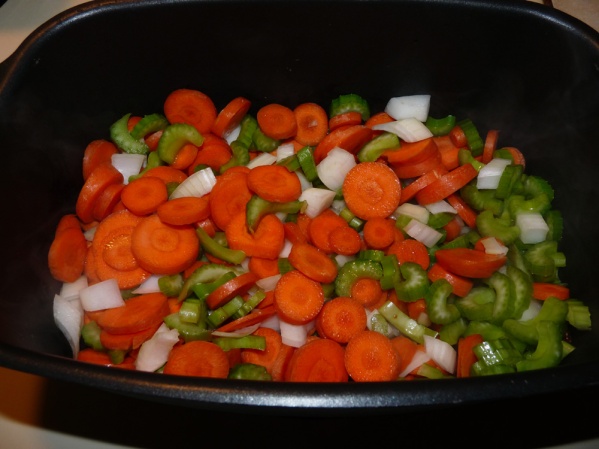 After the carrots are softened, add the rest of the ingredients.  Simmer it the proper length of time then stir together the dumpling ingredients and drop it by heaping teaspoons into the hot mixture.  I found if I dip the spoon into the hot broth before each dip into the dumpling mixture they drop off the spoon nicely. 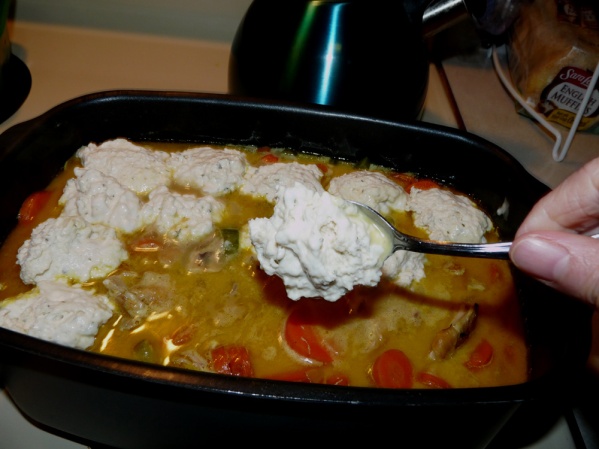 The dumplings will seem to fill the dish but never fear, you can break them apart when they are finished cooking in the oven if necessary.  When you serve the chicken and dumplings it will seem watery like soup at first but the dumplings when broken up into the bowl will absorb all of the lovely flavored broth.  It will turn into a stew before your eyes!

Spread the chicken pieces into a frying pan, salt and pepper, and cook on all sides until done, about 30 minutes. Test for doneness by trying to pull meat from the thigh bone. They should not be pink inside. Cool and remove meat from bones. Set aside or refrigerate for later.

Heat oil in a Dutch oven or other dish that can be used both on the stove and in the oven. Add diced onion, celery and carrots to the pot. Cook until carrots begin to soften. Add curry powder and cayenne pepper. Add chicken broth, coconut milk, chickpeas, and reserved chicken. Allow to just come to a boil. Reduce heat to medium and cook for 15 minutes. Test and add salt and pepper to taste.

Combine the dumpling ingredients in a mixing bowl and stir just until combined. Spoon dumpling mixture into soup one heaping teaspoon at a time.  Place dish into oven (uncovered) for 15 to 20 minutes.

Remove from oven and serve.