When the name of a bar is longer than the time it takes me to eat one, it’s time to change the name!  So I officially dub these:  PBRK Bars!  Which makes it sound like someone whizzed on a tree.  Ooops!  Well, I tried.  I’ll work on it later.  Anyway, the original name of these is: No-Bake Peanut Butter Rice Krispies Cookies.  Whew!

I saw a picture of these bars on Pinterest and thought wow, someone really doctored up these bars to take such a perfect picture of them.  But I pinned them and finally got around to making them.  I admit it, I was wrong.  I simply cut the bars and photographed them and they really do turn out just that picture perfect, all on their own.  Well with help from me, but I mean I didn’t have to photoshop them in any way I just had to make them.

Bring the corn syrup and sugars just to a boil

Baking is so different from cooking a meal; I’m reminded every time I post a dessert recipe.  I almost always modify recipes unless I’m making bars or cookies or such.  Then I don’t dare and I trust the person who wrote or posted the recipe that it will turn out right.  That isn’t always true, as I’ve found, but for the most part there are certain people you can almost always trust.  Martha Stewart is one of those.  Her recipes have never failed me, I should remember to use her recipes more often.

Line the pan with parchment

This bar recipe is one of hers, but I found it on someone’s blog with a reference back to Martha’s website.  I preferred to follow Martha’s site for the recipe and directions.  It’s a very simple recipe, and is probably a variation on the traditional Special K bars recipe we all ate back in the 70s and 80s.  More recently I posted a recipe I found for Fritos Bars, that was another variation.  But I had a container of Rice Krispies to use up (nobody eats it as cereal here) and this recipe called for 4 cups of Krispies. 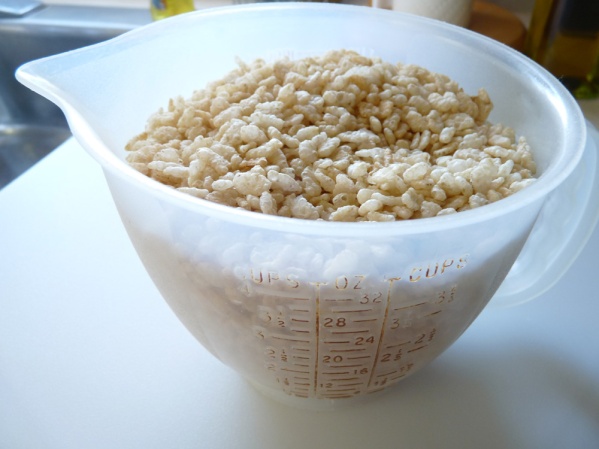 I was cautious when I put the corn syrup and sugars into the saucepan to bring it to a boil that I didn’t let it go a second longer.  The Fritos Bars can get a bit chewy if you let them boil a minute or two too long.  So I stood and stirred and never let the saucepan out of my sight the whole time.  It was only a couple of minutes before it was boiling temp, anyway.

Stir in peanut butter and vanilla

Next I was supposed to add the peanut butter, and I should have planned ahead on that.  I had 3 jars of PB in my cupboard and I guessed that what was left in two of them would be the 1 1/2 cups I needed.  As I scraped the jars into the melted syrup I was afraid it was taking me too long.  I hadn’t realized how much work it is to dig the last dregs out of TWO jars of PB!  It wasn’t a problem after all; the syrup was still all melty and fine and the bars mixed up well anyway.

Stir together in large bowl

So I was working fast to spread them into the pan, onto the parchment paper.  Again, I needn’t have worried; they were plenty spreadable and I had them flat and pretty with no trouble.  The recipe said to let them “cool” so I let them set at room temp for a few hours, then tried to cut them.  They were sticky yet so I put them in the fridge to cool for a few hours.  After that they were nice and firm and cut beautifully.

I did follow the recipe almost exactly, but I did add the vanilla at the same time I added the peanut butter.  I’m not sure why Martha’s recipe had it added with the Rice Krispies.  I’d think the vanilla would soak into the Krispies and it would be pretty awful.  But I did follow the directions and line the pan with parchment paper.  As many times as I’ve made Special K bars that removed easily from a pan, I don’t think the parchment paper is absolutely necessary.  It did help in that after I used a knife to loosen around the pan I dumped it upside down and the bars popped out.  I was then able to cut them very smoothly.  But I think they’d have come out easily if the pan had just been buttered.  So it’s an option to try.

As I said earlier, they were picture perfect.  And the taste?  Peanuty goodness!  Crispy and wonderful.  You could eat a lot of these in one sitting.  It’s best to store them in the fridge, out of sight, for just that reason.  You’re warned.

Line a 9 x 13-inch baking pan with wax paper or baking parchment. Place the corn syrup and sugars in a large saucepan over medium heat and stir to combine. Bring to a boil. Remove from the heat. Add vanilla.

Stir in the peanut butter and mix well to combine. Quickly stir in the Rice Krispies. Spread into the lined baking pan. Cool and slice into squares.