Winter is still making itself at home up North.  I’ve had a nice long spell to enjoy making my soups this year.  Once spring arrives, soup just isn’t the first thing that comes to mind at mealtimes.  But when you wake up to -10 F the third week in March, soup is in order.  This is another one of the pureed soups that are favored by my sister Linda and myself.

When my P.S. (Princely Spouse) brought home a butternut squash last fall my first thought wasn’t of soup.  I pictured it roasted, buttered, and setting on my dinner plate as a side dish.  One I’m not so fond of, really.  Squash is boring to me; it tastes sort of like a potato that’s trying to evolve into something better.  But when squash is put into a dish with other ingredients and some interesting spices, I’m there!

I don’t know the types of squash by heart: I finally looked them all up last fall and made myself a cheat sheet.  I printed it out and hung it by my desk.  Then I even put it as desktop wallpaper on my kitchen computer for quite a few months, hoping to absorb the names by seeing them often.  That didn’t work but I still have my printed poster.  Click on the poster here to print one for your own use!  Right click and save to your hard drive or print. 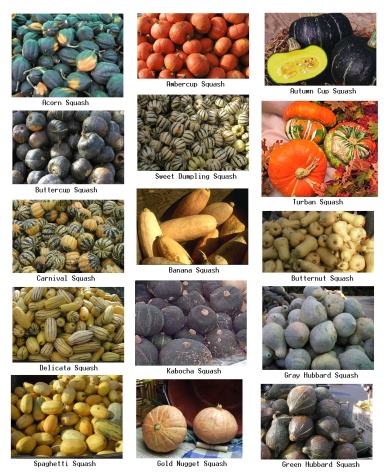 While trolling the internet for recipes I’ve learned that squash can be so very interesting depending on what nationality is using it.  I really liked the idea of Indian spices.  On other sites it is used in pasta dishes that usually include Italian seasonings.   It can even be put in soups!  Aha!  My soup mind reeled!  I made a note that I’d like to try squash with pasta some time, but soup was the idea that sounded most interesting. 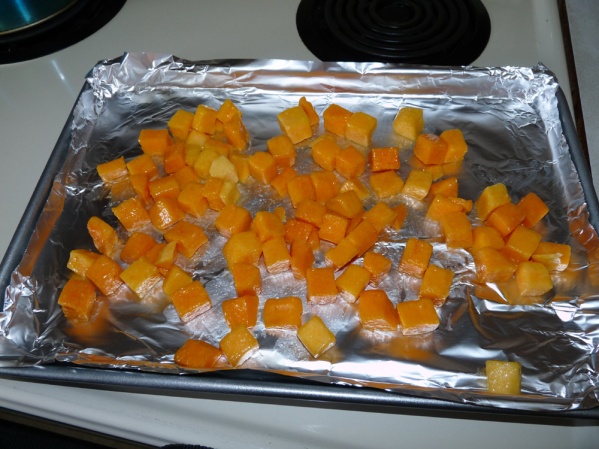 Peel and dice the squash

Butternut squash soup can be made dozens of different ways.  I thought roasting the squash and taking it from there sounded like a good plan.  I like almost anything roasted; surely the oven would sweeten and even caramelize it a bit for the best flavors.  The recipe has the squash cut in half, cleaned out, then roasted face down.  I’ve done it that way, but prefer it more browned so I peel the squash and cube it.  Then I toss it in a bowl with some olive oil, then roast it on foil on a baking pan. 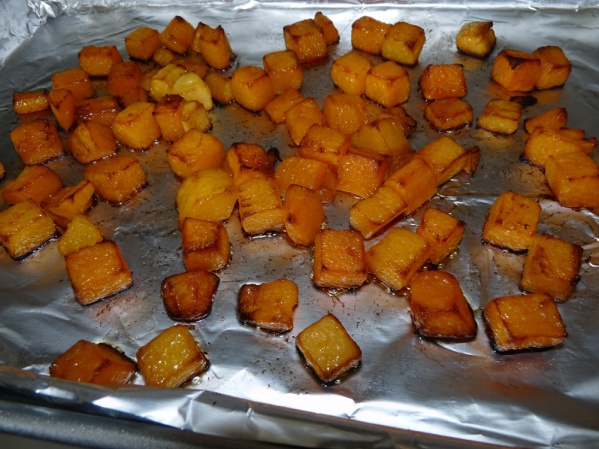 Butternut squash is a bear to peel and cube, so if you prefer the other way, go for it.  The flavor is just as good in the finished soup.  I have even found bags of already diced butternut squash in the produce department, and when I’m feeling lazy I go that route.

I loved that there were pears in the soup.  That requires planning so that your pears are ripe when you’re ready to make the soup.  They’re a bit hard to peel with their thin skins, but it is possible!  Then just dice and throw it in the soup pot.

Saute the onions until brown

I like to brown the onions for this recipe.  Long, slow cooking so that they have that caramelization that makes them sweeten.  It also adds a nice depth of flavor to the soup.

When I have all of the ingredients in my soup pot I bring it to a boil, then reduce the heat and let it simmer for about 30 minutes.  For this recipe I had a cup of roasted squash left from another night so I roasted a small squash and added both to the pot.  As the pot simmers, the house fills with the most amazing smells of curry and squash and onions and pears and… it is amazing.  It bears saying twice?

Use a blender or an immersion blender to puree the soup

The soup recipe I’d chosen for my first effort ended up being a “keeper”, in my P.S.’s opinion.  We loved the Indian flavors that had just a touch of heat.  It tasted like a special treat, not like we were just trying to use up a plain ole squash.  I’ve tried one other squash recipe since then and it had a whole different flavor profile but was again very tasty.  That recipe had a raw avocado blended into the soup at the end which was definitely an unusual twist.  I’ll have to do a post on that some day.  This soup had two pears that add just a touch of flavor; I think adding 3 was a better idea.  The curry and the squash overshadowed only two pears.

But the flavors of this soup are smooth on your tongue and definitely a nice cup of sipping.  They taste like fall and winter and a spring that refuses to appear.

adapted from All Recipes

Cut squash in half lengthwise; discard seeds and membrane. Rub with oil and place squash pieces, cut sides down, on the prepared baking sheet. Roast in preheated oven until very soft, about 45 minutes. Scoop the pulp from the peel and reserve. Or peel squash and dice in uniformly sized chunks, then toss with oil in a bowl. Roast for 30 minutes.

Melt butter in a large soup pot over low heat. Stir in the onion, garlic, ginger, curry powder, and salt. Cook and stir until the onion is browned and caramelized, about 20 minutes. Pour the chicken broth into the pot, and bring to a boil. Stir in the pears and the reserved squash, and simmer until the pears are very soft, about 30 minutes.

Puree with a blender until smooth. Return the soup to the pot, stir in the half and half, and reheat.

I forgot the half and half the first time, tasted it and loved it.  I did add it then, but to cut calories you could leave it out.