I don’t make pizza because I think the restaurants and take and bake places have the process perfected.  I’m not one to mess with yeast and kneading and that kinda thing, and I’m not going to invest in a brick oven.  But when I saw this recipe I thought maybe I could try to make a pizza again.  I did try years ago but never did well.

The recipe on Pork Be Inspired’s site was promoting pork, and I was promoting using it up from my fridge.  I also had fresh asparagus and everything but the roll of pizza crust.  A quick trip to the grocery and I had my pop-open pizza crust in a tube and was ready to make this baby.

I sliced the onions as directed and chopped the aspargus into 1 inch pieces.  I put them in a skillet with a little olive oil and sauteed them for about 5 minutes, stirring often.  I had some chopped red bell pepper in the fridge so I threw that in just for the fun of it.  What doesn’t go with red bell pepper?  Besides cheesecake, that is.

I already had the ham cubed and the cheese shredded.  Check.  I noticed I had a bunch of fresh pineaple chunks in the fridge and that sounded nice with ham and asparagus.  I didn’t have alfredo sauce in a jar.  Horrors.  I make my own, so threw together a small batch of alfredo and set it aside.

Spread the crust onto a greased pan

Next I spread foil in a baking pan, greased it and sprinkled the cormeal over it.  I rolled out the tubed crust and tried to get it all even.  It gave me trouble on one end, not wanting to separate and roll out, but I won.  I had it all spread flat and slid it into my preheated oven. 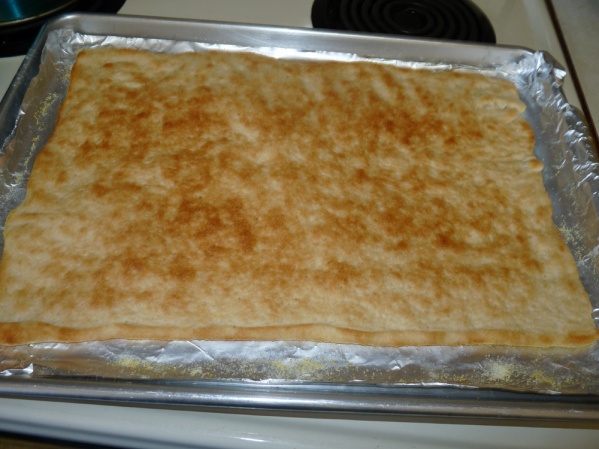 The crust came out nicely browned and ready for toppings.  I spread a nice thick layer of alfredo sauce, then layered the veggies.  I layered the ham, then the pineapple.

Layer the pineapple and ham

Since the cheese alfredo layer was so thick I put a light layer of finely shredded mozzarella over the top then put the pan into the oven.

Layer cheese over the top

The directions said to bake for 10-12 minutes more and by that time the crust was fairly dark and the pizza was nicely cooked.  I wished the top cheese had browned a little more, but it was what it was.  I let it stand for 5 minutes then used a pizza cutter and cut it into squares.

It tasted so good!  I crust was nice and crispy on the bottom, the alfredo sauce was a nice flavorful base and the veggies and ham and pineapple were a great mix.  I had been assuming it would be an ‘eat with a fork’ kind of pizza, but it held up well in hand.  We loved it!

I can imagine all kinds of combos using this crust from a tube method.  The crust isn’t a yeasty, chewy crust like we usually prefer.  It’s more of a crispy bisquit crust but a pleasant change and maybe a little more low carb than our usual pizza.

adapted from Pork Be Inspired

Heat oven to 425 degrees F. Grease a 12- or 13-inch pizza pan or a foil covered baking pan. Sprinkle with cornmeal. Pat pizza dough into pan, rounding corners of dough rectangle to fit pan and building up edges. If desired, snip edges with kitchen shears. Bake about 7 minutes or until lightly browned.

Snap off and discard woody portions of asparagus. Cut into 1-inch pieces.

Make alfredo sauce: In a skillet melt the butter, then stir in the flour. Cook for 2 minutes, stirring constantly. Add the cream a little at a time, stirring to incorporate. When all is added and it’s smooth and thickened, stir in the cheese. Continue stirring until it is fully melted and smooth again. Set aside.

Spread crust with Alfredo sauce. Top with vegetable mixture, ham and pineapple. Sprinkle with cheese. Bake for 10 to 12 minutes more or until golden. Let stand 5 minutes before cutting and serving.

One thought on “Asparagus and Ham Pizza” 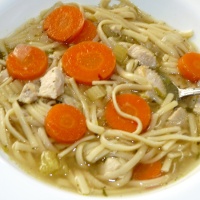