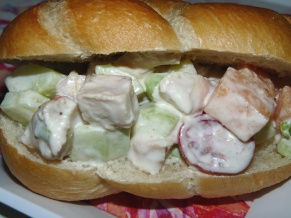 Cantaloupe has become my new black. I like to see how many new and unusual dishes I can create that include cantaloupe. I’m trying to be cantaloupe’s new public relations expert. I want it to become as popular and often used as pineapple! It’s only fair that all fruit is able to reach its full potential, don’t you think?

My latest recipe was a sandwich. I had leftover grilled chicken and wanted to add cantaloupe and maybe a few other things to make a chicken salad to be served on some yummy sourdough buns I’d picked up and one of the big –mart places. We usually don’t do designer buns or breads because my P.S. (Princely Spouse/Personal Shopper) works for a major bread company. We pretty much stick to his products, of course.

So I snuck the buns into the house, along with a fresh cantaloupe, to prepare sandwiches to go along with my newest soup recipe for supper. I’d found a recipe to use as a start on Taste of Home and was ready to start chopping things. 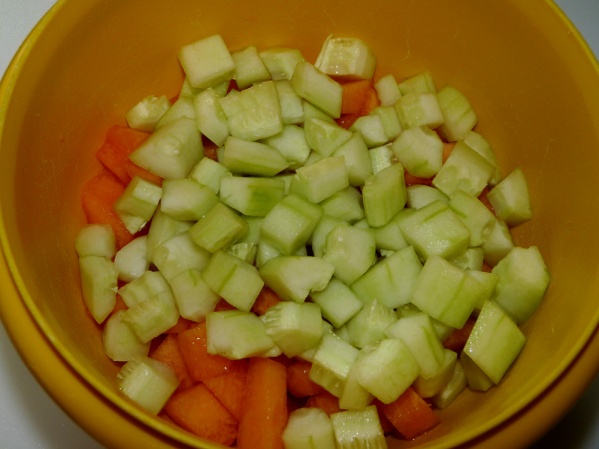 I’d already peeled and chopped my cantaloupe right after I got home. I usually cut it into large dice but this time I cut about half of it into a slightly smaller dice for the salad. Next I peeled and diced a cucumber, removing the center strip with the seeds. I usually do that to keep a salad burpless. It works pretty well! 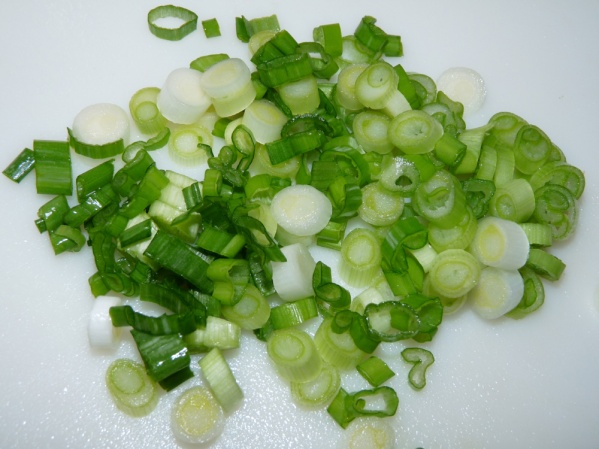 Next I sliced a quarter cup of green onions and added them to the bowl with the cantaloupe and cucumbers. The recipe called for chives but I liked green onions in most salads and so have them on hand. The recipe also called for halved green grapes and I’d decided one fruit was enough and changed that to grape tomatoes. They added just that touch of acid to balance out the sweetness of the fruit. I sliced them in half and added them to the bowl. 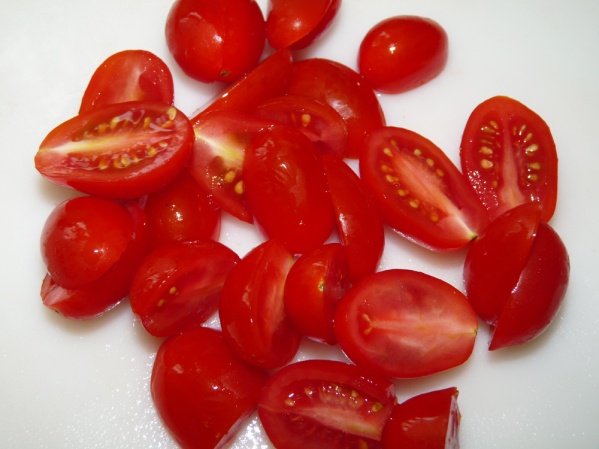 Halve a cup of grape tomatoes

I diced two leftover grilled chicken breasts and added them to the bowl. Then I mixed together the dressing ingredients: greek yogurt, lime juice, mayo, cayenne and salt. I whisked that together and added it to the bowl of fruit and veggies and stirred well. 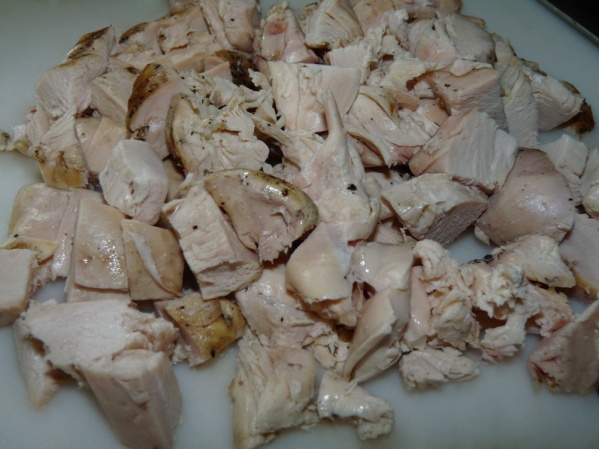 The sourdough buns sliced, I loaded them with chicken salad. I’d done a quick taste test and was so excited with the flavors I couldn’t wait to get my final blog pictures taken and serve the sandwiches for supper! We loved the tastes; the tartness of the greek yogurt and lime juice were a great dressing on the chicken, cantaloupe and grape tomatoes. We devoured two buns each and my P.S. went back for seconds. 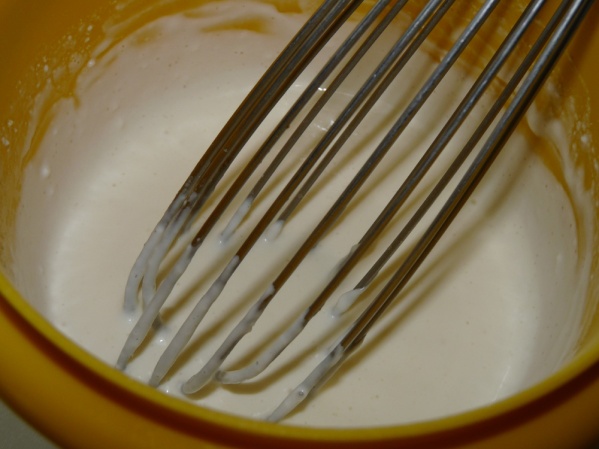 This was an easy and so refreshing salad; it would have been great on lettuce or in lettuce wraps for an even lighter meal. Or simply eaten out of a bowl, no bread at all, to cut calories. I’m thinking next time to serve it a tortilla wrap. I had the leftovers the second day on the leftover buns, so didn’t get a chance to make a wrap yet. I’m thinking even some chopped red bell peppers, another of my obsessions, would be a great addition to the salad as well! 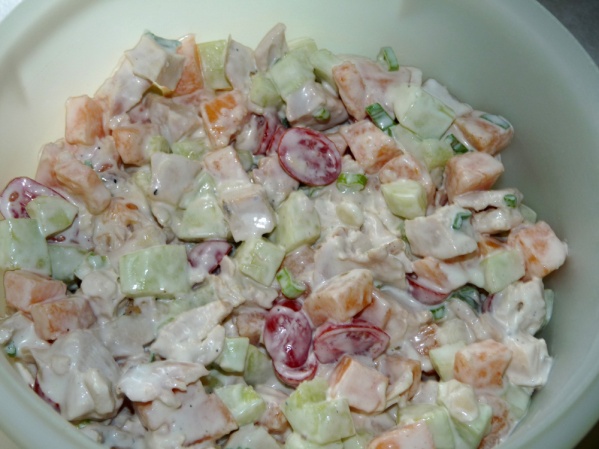 I’m happy with my creation and am one step further to making cantaloupe the new pineapple! Once I have that accomplished, I’ll move on to honeydew melon. There’s another under-utilized fruit!

Add cantaloupe, cucumber, chicken, onions and tomatoes to a bowl.

Best made and eaten in the same day. Good the second day but will be a bit watery after the salt draws moisture out of the veggies.