I agree with a blog I read recently; I’m tired of pumpkin in every recipe this time of year. But I’m going to contribute to the pumpkin traffic jam by posting a pumpkin recipe today. My excuse is that I have a package of pumpkin English muffins that needs to be used, and bread pudding seemed like the best idea. And since it’s covered in a pecan caramel sauce after baking, we are totally going to forgive that it has pumpkin in it, ok?

My P.S. (a bread man) brought home two packages of pumpkin English muffins. They seemed like a good idea, toasted with butter and a sprinkle of cinnamon on them. I will admit, the cinnamon is mixed with sugar in a shaker, so there were extra calories involved already. But when my P.S. suggested I “might” like to use a package of the muffins for bread pudding (read: he was hoping I’d make it for him without having to beg) I thought of a Pinterest pin that used a caramel sauce over the bread pudding.

I looked the recipe up and it was supposed to sit overnight, or at least 8 hours, before baking to absorb all the liquid. I wanted to make it for dinner, as dessert, so that was a bust. Instead I used a different recipe from ifood.tv for the bread pudding, then followed the caramel sauce directions from the second recipe. I was determined to have a pecan caramel pumpkin bread pudding for dessert!

I sprayed a baking dish and cut up the pumpkin muffins into squares and put them in the dish. The part where I was supposed to drizzle the remaining butter over the top threw me, since I’d used a spray for the baking dish. I simply melted 2 tablespoons of butter and drizzled it over the bread. Problem solved.

Next I measured the rest of the ingredients into a bowl and whisked it until blended. I did use the bourbon (huge fan of it in cooking) but vanilla would have been good as well if you want an alcohol-free dish. 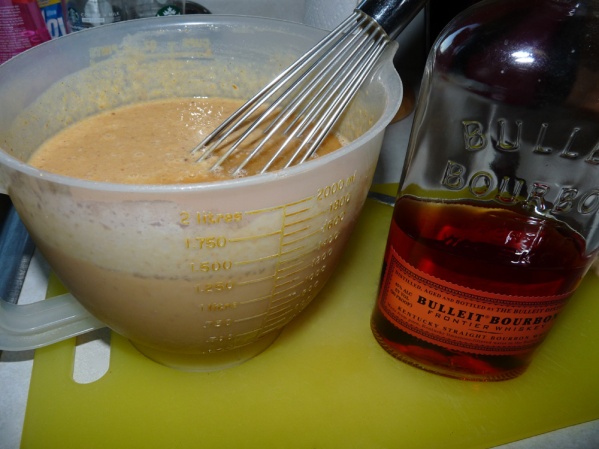 Once the liquid was mixed I poured it over the bread, mixed it around a bit, then sprinkled pecans over the top. I let the dish set for 30 minutes, then place it in the preheated 350°F oven for 45 minutes.

Pour egg mixture over bread and mix to coat. Allow to set for 30 minutes, then bake in water bath

I did set the dish into a 9×13 baking pan and filled it half full with water as directed. I’ve never done that for a bread pudding; I’ve only used a water bath for cheesecakes. But I followed the directions this time.

Just before the timer went off I made the caramel sauce. I put the butter, sugar and corn syrup into a small saucepan on medium heat and stirred it until the sugar was melted. I added vanilla, stirred again, then poured it over the bread pudding.

I tucked my spoon into the pudding here and there, so the caramel sauce would be integrated into the pudding a little more.  It seemed like a lot of sauce but it soaked in and wasn’t swimming in sauce after it was baked again.

I put it back in the oven for 5 minutes, then removed it and set it on a rack to cool.  The caramel sauce directions on the second recipe were what I followed for timing and final baking time. 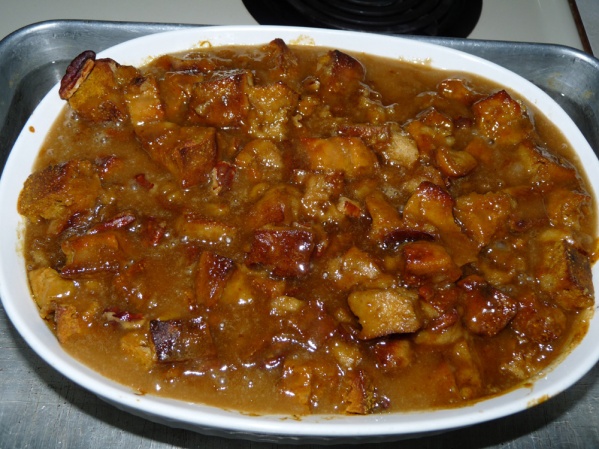 Did we love this pumpkin bread pudding? Oh yeah! It was excellent! The pudding itself was not overly sweet, in spite of having both brown sugar and honey in it. The caramel sauce on top added a nice sweet touch. The bourbon flavor didn’t stand out; I could maybe have used another tablespoon or so. The pecans were perfect, and I’m not usually a nut person. They fit in this pudding very well.

I ate bread pudding cold for breakfast the next day and even cold it was the best way I’ve eaten pumpkin in forever. I’m going to have to remember to make this over the holidays when we have overnight guests. It will be a hit!  They can microwave it or eat it cold.

Brush the baking dish with butter.

Cube the bread and place it on the baking dish and pour the remaining butter on the bread cubes.

In a mixing bowl, whisk together the half and half, eggs, brown sugar, honey or maple syrup, Bourbon, fresh pumpkin puree and pumpkin spice.

Pour the pumpkin mixture over the bread cubes, mix well and allow the custard to soak the bread for 20 minutes.

10 minutes before the bread pudding is done, in a saucepan stir brown sugar, butter and corn syrup until sugar is melted, about 5 minutes.

Stir in vanilla and pour over top of bread pudding. Make dents in pudding so it soaks in all over. Bake for 5 more minutes.

Serve warm as a dessert.