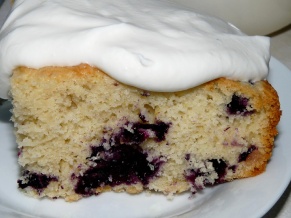 Ever have a day when you wanted to stay in your pajamas all day but the world conspired to make sure you combed your hair and put on underwear? That was my day recently. I’d had a busy weekend and was looking forward to doing very little on my Monday off. Unfortunately, it ended up like everyone else’s Monday.  Comb and underwear was required.

Somewhere on his route, my P.S. got stung on his lip by a wasp and he learned he is a bit allergic to them. His lip and face swelled and he started to itch in unmentionable places. Although I felt bad for him, it made him late for dinner with the side trip to the emergency room.

Making fried rice is quick with leftovers and that was what I’d planeed for dinner. I tried to slow the process down, hoping he’d be home soon, but how possible is that with an Asian stir-fry? Not very possible. I was also baking a blueberry buttermilk cake and trying to take pictures of both processes as I went along. Both recipes turned out well (I’ll blog the steak fried rice later) but I think the cake could have been better.

I’d started by creaming the butter, lemon zest and sugar together, then adding the egg and vanilla. I’d used my hand mixer, not wanting to pull my stand mixer out from the pile of washed pots and pans it was buried behind. That happens often, I must reorganize my kitchen. It seriously needs to be more baking accessible! So I was using my hand mixer and the batter was flying all over; like on my glasses and nearby walls. Note to self: use taller mixing bowls when using hand mixer.

Next I mixed the flour, baking powder and salt together and measured out the buttermilk.  With one hand holding the mixer, I poured about a fourth of the flour into the bowl, and let it blend in. Then I poured about a fourth of the buttermilk in and let that incorporate into the batter. I repeated the steps and eventually had all of the flour and buttermilk mixed into the batter. And onto the walls, and on me. I wasn’t joking about needing to use a taller bowl. 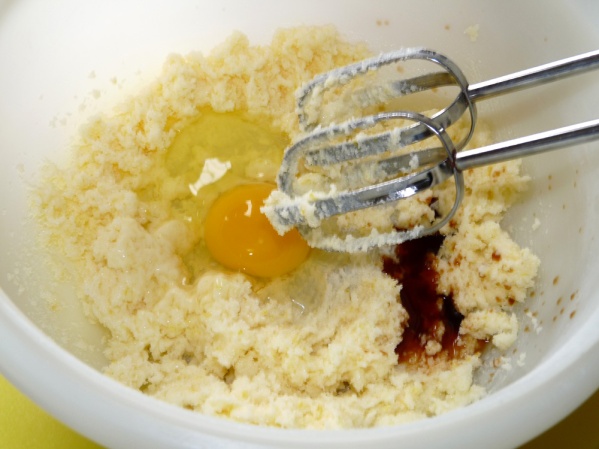 I mixed the blueberries with a ¼ cup of flour as directed, then stirred them into the batter. The batter was quite dense, I’m not sure that flouring the berries would have been necessary. 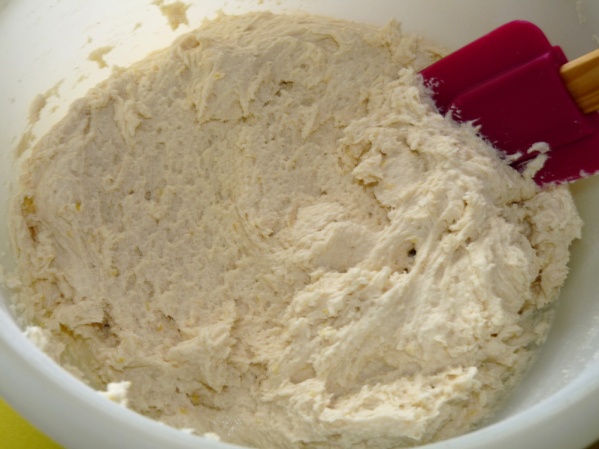 As I checked the recipe one last time I realized I’d used 2 cups of flour and another ¼ cup for the berries. The ¼ cup should have been taken from the 2 cups of flour, so I had used at least 2 ¼ cups of flour in the batter. I had also just eyeballed the ¼ cup, so it might have been closer to ½ cup of flour. But it was too late, any damage was done and I just shrugged and waited to see what happened to my cake.

Toss berries with flour and fold into batter

I sprayed a baking dish and spread the batter into it, then slid the dish into the oven that I’d preheated to 350°F. I set the timer for 30 minutes.

In the meantime I’d been making the fried rice and grumbling about my P.S.’s lack of letting me know where he was/when he was coming home. I noticed the blueberry cake wasn’t sugared on top like the picture on the blog was, even though I’d put the last tablespoon of sugar over the top as directed. Mine had melted and disappeared. Disappointing.

After we finally had dinner that evening, I served pieces of the blueberry buttermilk cake for dessert, topped with some freshly whipped cream. It was delicious and had a really good texture. My P.S. loved it and said it was like strawberry shortcake, with blueberries. I said it just melted in my mouth, it was so soft. I did think it was a little drier than it should have been, probably due to the roughly ½ cup extra flour. But maybe if I hadn’t realized I’d added too much flour I wouldn’t have noticed. It wasn’t that much drier. My cake texture and the photos on the blog differed quite a bit, however. 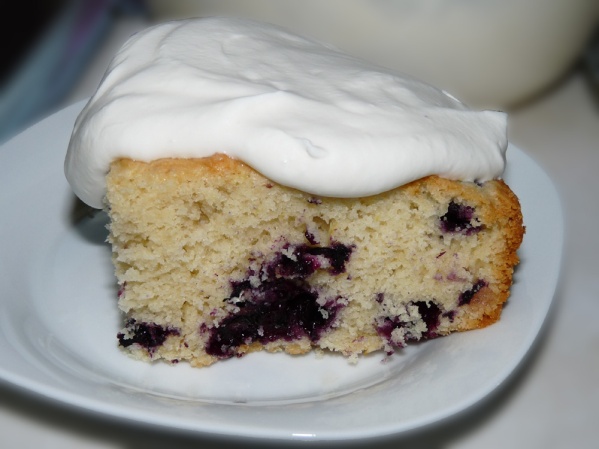 I liked the lemon zest in the cake; it brought a slight acidic touch to the sweet cake and was a good match for the blueberries that were already a bit tart. I think lime would also be a good match if you didn’t have a lemon on hand.  But I like blueberries in breakfast foods.  What the cake most tasted like was a bluebery muffin.  Just one that was cut out of a pan into squares, instead.  It’s like we skipped making it round!

I’ve modified the listing for flour so that nobody makes the mistake I did. I also changed how the sugar amount was described, as that was also a little confusing. And I will report that I made the cake on a Monday, but when I had the last piece on Thursday it was still moist and fresh.  That’s a pretty good shelf life for a coffee cake.  I simply stored it cut into squares in a Ziploc container on the counter.

Cream butter with lemon zest and 7/8 cup of the sugar until light and fluffy.

Add the egg and vanilla and beat until combined.

Toss the blueberries with ¼ cup of flour.

Whisk together the remaining flour, baking powder and salt. Add the flour to the wet mixture a little at a time, alternating with the buttermilk.

Fold in the blueberries.

Bake for 35 to 45 minutes. Check for doneness with a toothpick. Baking time may vary depending on your pan.