With the gifts of very large vegetables from people’s gardens and farms this year, I’ve been scrambling to use things like cabbage and squash in new ways. I’m not particularly a squash fan, unless it’s in something interesting. By itself I would leave it, rather than take it.  I do have a few favorite recipes to use squash in, and have learned to make it in unique ways.  I’ve found it can even be delicious in soups.  After having squash ravioli at a local restaurant, I’ve wanted to try making it on my own.

Making ravioli has always been on my bucket list, and I grimace to admit that I have owned a pasta maker and a ravioli maker for several years. More than several. Ok, ten years. I’ve used the pasta maker once, and the ravioli maker that came with it once. The ravioli maker was ridiculously inept, so my P.S. bought me a separate set of equipment to make ravioli and it is covered by yes, that many years worth of dust on a top shelf in a back closet. It’s never been used.

Each summer I think: I need to use this but why work up a sweat making and boiling pasta in the summer? This is winter stuff and with our long and extremely cold winters up North, I will have plenty of time to practice and play around with pasta. Then I forget until the next summer. Maybe I’m in denial? Maybe I have a mental block for making pasta?

This recipe isn’t going to break that blockage, because I didn’t make pasta. It was a busy week, I just never found the time and the giant squash I’d roasted several days ago needed to be used. Enter the idea to make wonton ravioli, as I’d seen on tv and on blogs. It was coming close and might even put me in the mood for making real ravioli.

Mash ingredients together for filling

I looked at recipes and they all varied so much I threw together my own version of squash filling. I used 2 cups of roasted squash, a cup of ricotta, a half cup of grated Parmesan, sage, salt and pepper.  I mixed the ingredients in a bowl using a potato masher until they were evenly blended. 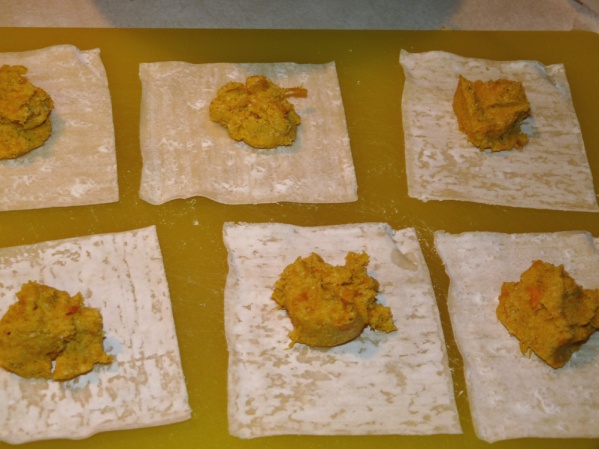 Center a tablespoon of filling in the center of the wrappers

Next I opened the package of wonton wrappers and put a damp paper towel over it to keep them moist as I made a few at a time. I laid out 4 wrappers and placed about a tablespoon of filling in the center of each wrapper.

I used my finger and a nearby dish I’d filled with water to wet two adjoining sides of each wrapper.  I carefully folded the other side over to form a filled triangle, then pinched around the two edges to make sure they were safely sealed.

I laid the first four on a sheet pan covered in waxed paper and pulled out four more wrappers and repeated the process. Then repeated until I had about 24 filled ravioli.

I’d put a medium-sized saucepan on medium-high heat and the water was boiling and ready. I dropped 4 or 5 ravioli in at a time, waited for them to float to the top (meaning they were done) then removed them to a dish using a slotted spoon. 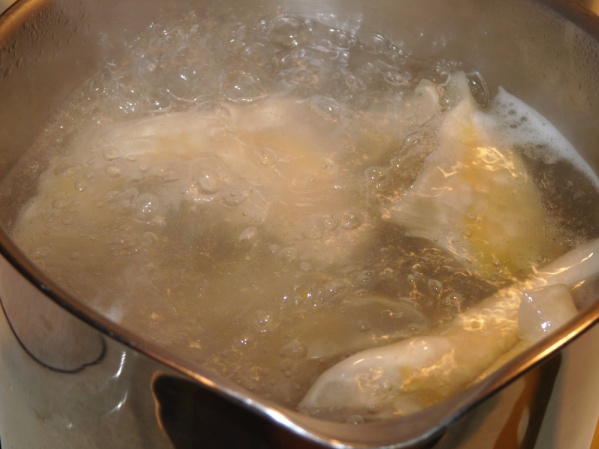 The ravioli were cooked very fast. The pasta was so thin it was barely a minute cooking time for each batch. There was the one batch where two of them fell apart so the water discolored from the infusion of yellow squash, but otherwise there were no serious problems. I probably didn’t quite seal those two; it’s easy to miss a corner if you’re not carefully pinch all around the outsides.

I’d heated a skillet and melted butter, cooking until it begin to brown. As one blogger had commented, she liked the nutty flavor of a simple browned butter on ravioli rather than a heavy sauce that distracted from the sage/squash flavors.

The drained ravioli went into the skillet and I tossed them to coat, then browned them just slightly for a few minutes. My P.S. commented that he thought that was more of a pierogi move, but I firmly told him they were “ravioli”. There were no potatoes in them!

Saute in browned butter and serve

I served the ravioli with dinner and we really liked my version of squash ravioli. Just the right amount of sage, not in your face, and the creaminess of the ricotta and parmesan also gave it a nice kick in flavor. I could have eaten a mini mountain of them, and was sorry I hadn’t finished making the entire package of wonton wrappers!

I later finished using the filling and wrappers and froze the remaining ravioli to pop into boiling water for a quick meal or side dish another evening. A fast and handy meal that was easy to freeze for later, what more could we ask for? Well we could ask for real, homemade pasta instead of wonton wrappers. And I promise I will get to that. Maybe this winter. It’s on my list.

Package of wonton wrappers (mine was 50 count)

Mash ingredients, minus wrappers, with a potato masher in a bowl.

Making 4 or so at a time, lay out wrappers, put a tablespoon of filling in the center of each wrapper. Using your finger, wet it in a bowl of water, then run it around two adjoining sides of the wrapper.

Carefully fold wrapper over into a triangle and seal the adjoining edges. Press together well. I ended up holding each ravioli as I pinched the edges together.

Lay ravioli on a sheet of waxed paper and continue until desired number made, or filling and wrappers are all used.

Bring a medium-sized saucepan of lightly salted water to a boil. Drop 4 or 5 ravioli at a time into the water and remove with a slotted spoon when they float to the top. Set aside and continue in batches until all ravioli are cooked.

Heat a medium sized skillet over medium heat and add several tablespoons of butter. When it begins to brown, toss in ravioli and toss to coat. Cook for several minutes until ravioli reaches desired brownness.

Ravioli can be frozen on sheet pan then removed to a freezer bag. To use, drop frozen ravioli into boiling water and continue with directions above.