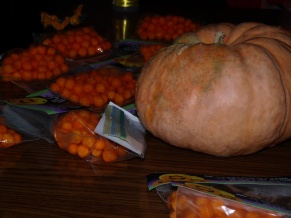 Granddaughter Bella and I spent a fun Saturday recently making fun Halloween/Birthday party foods for her little brother, Casey, who was turning 3. I’d found some adorable ideas that were easy for a 6 year olds’ attention span and capabilities. She had so much fun cooking and then telling everyone at the party the next day that she had made them with me.

We started by making small zippered bags of pumpkin poop. We used round cheese puff balls, putting them in the bags, then stapling a cute jingle across the top that explained how the pumpkin came to poop in my house. It was hilarious, and the kids were charmed by them at the party. The adults weren’t so easily charmed; they simply rolled their eyes. Oh well. It was a kid thing.  I found the printable at Nothing But Country. 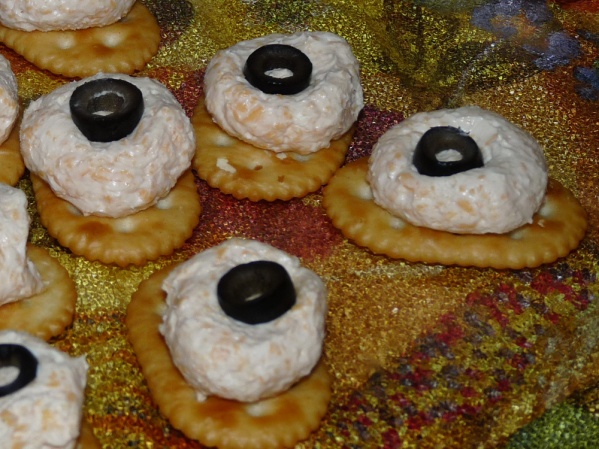 The next item on our cooking list was cheeseball eyeballs. I mixed together some room temp cream cheese and some shredded cheddar in the food processor. I added a shake of garlic powder and a few glugs of Worcestershire for seasoning. The recipe I adapted hadn’t suggested using white cheddar, but afterwards I thought it would have made a whiter eyeball. Although white wasn’t exactly a scary look, so maybe the visible orange shreds were a better idea. 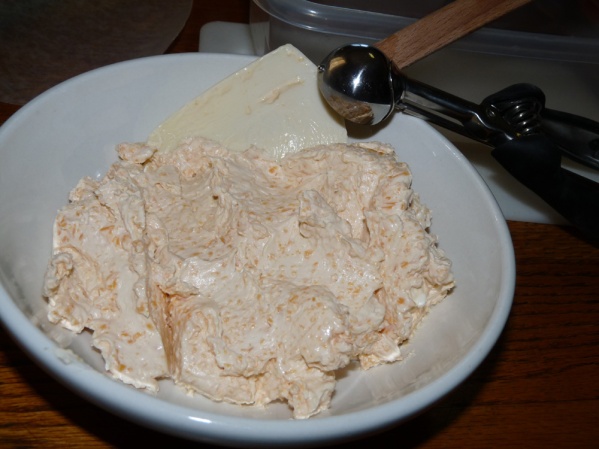 Use food processor to blend ingredients

When the cheese was blended, I used a small cookie scoop and made balls out of the mixture. Bella rolled them into smoother balls with her hands, then set them into a container and flattened them slightly.  As a final touch we used sliced black olives, pressing them into the eyeball for pupils. Cute! They were refrigerated to firm up then transported to the party the next day. 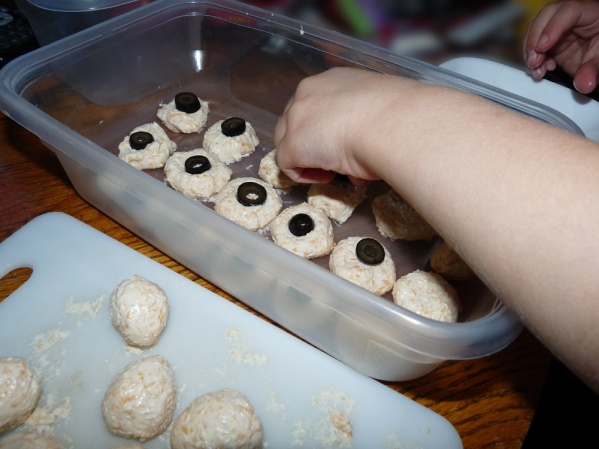 We set the eyeballs on Townhouse crackers, since they are oval and sort of followed the shape of an eye. They looked hilarious setting on a platter on the buffet table. 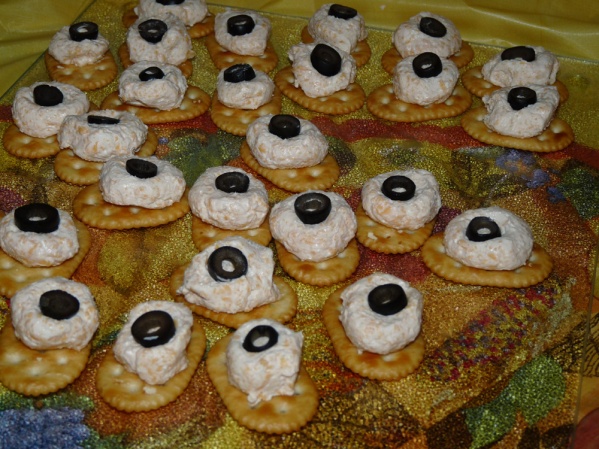 Center eyeballs on crackers on a platter

Everyone loved the cheesy eyeballs. It was a nice savory bite, cracker and all. And also very fitting with our Halloween theme.

The third treats Bella enjoyed making were little witches brooms. I cut string cheese in thirds, then cut the bottom half of each piece into strands to imitate a broom. 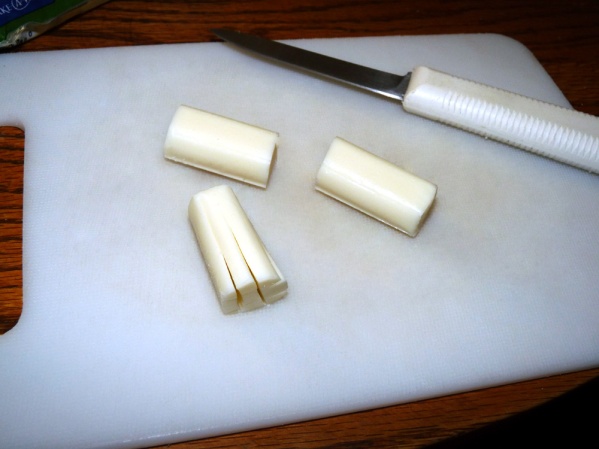 Cut string cheese into thirds, then cut marks down the sides halfway down to make the brooms

After breaking a few pretzel sticks trying to shove them into the other end of the cheese piece, I found if I used my paring knife to make a small cut into the center of the other end, she was able to slide the pretzel in without it breaking. 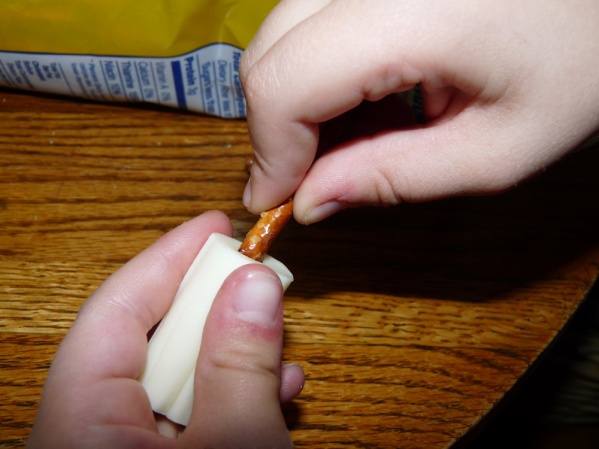 Press a pretzel stick into the center of the solid end

We did have a few cheese pieces in the beginning that were cracking open on us; I realized I needed to cut the broom strands shorter and leave more solid top on them. After that, we had no further mishaps and got them all made and stored into a container. 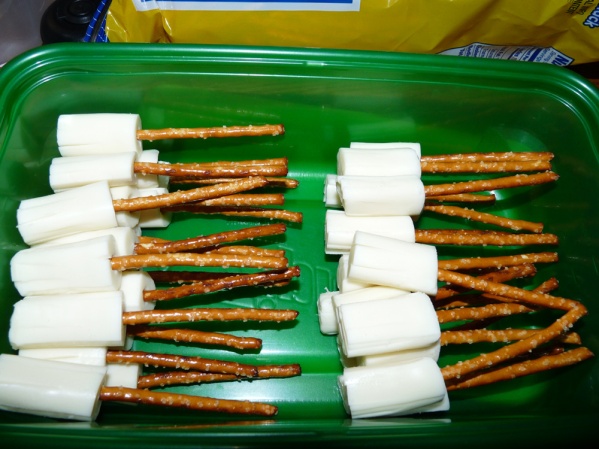 Store in a container until served

At the party the next day we laid them in a circle on a few leaves of curly lettuce and they were cute as could be. The kids were devouring the brooms and the biggest fan was little Casey. Between the caramel apple grapes (a future post) and the cheese brooms, he was a happy snacker! 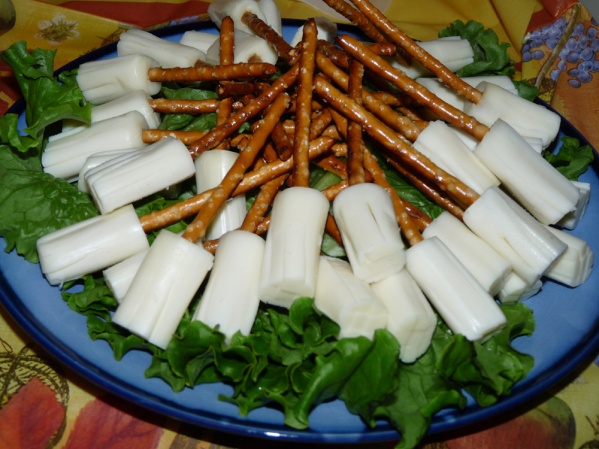 Arrange on lettuce on a plate

Mix cheeses, Worcestershire and garlic powder in a food processor.

Scoop into balls with a small cookie scoop, then roll between your palms to smooth them.

Place on waxed paper in a container. Flatten each ball slightly, then press a slice of black olive into the top. Continue in layers until all cheese is used.

Refrigerate to firm up. Place each eyeball on a Townhouse cracker on a platter to serve.

Adapted from this recipe.

String cheese; each stick makes 3, buy as many as needed
Bag of thin pretzel sticks

Cut cheese into thirds, then cut each third halfway up. I made two slits up one direction, then turned it to the uncut side and made two more cuts halfway up.

Make a small cut into the center of the top of the cheese section, then insert a pretzel stick.

Refrigerate until served. Arrange on a platter.

12 sticks of string cheese made 36 brooms.