A visit to my sister’s house is never boring. The amount of hunting Linda’s husband and boys do is amazing, and their freezers (yes, two of them besides the fridge’s freezer!) are proof of their hunting successes. She knows I dislike the flavor of venison, but I’m game (and punny!) for any other meats. When she announced we were going to make a jumbo batch of elk ricotta meatballs, I shouldn’t have been surprised.

Four hours later her freezer was about 300 meatballs fuller. That was a lot of rolling and frying! Her hubby processes his own meat, and mixed pork in with the elk because on its own it is too lean. We started out with 6 pounds of the elk mix. That’s a whole lotta elk!  We used my go-to recipe for ricotta meatballs and they became my new favorite meatballs.

Measure the ingredients into a large bowl

We measured out the ricotta, parmesan, eggs, and seasonings. 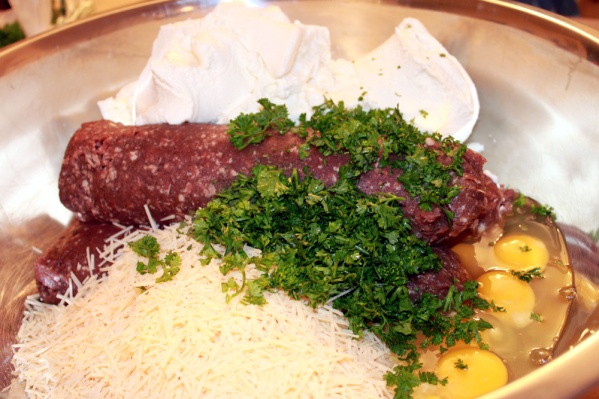 We chopped the fresh parsley and added it to the bowl.

We tried to mix it with a large spoon and it was just not working well. Eventually I discarded my jewelry and just dived in with both hands, mixing until it looked well blended. That meat was cold! My hands were chilled and I had to stop to let them warm several times. My hands ended up bright red from the cold meat!

After washing and warming my hands, I used a cookie scoop to form the meatballs, laying them out on baking sheets. Linda rolled them smooth with her hands, then rolled them in flour and fried them in a nonstick skillet on the stove in batches. 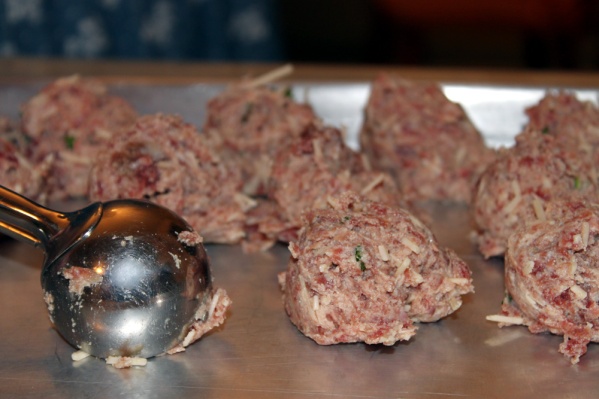 Scoop into meatballs and place on sheet pans

Eventually I was done scooping and rolled the rest of them smooth as Linda fried. The four hours seemed to pass pretty fast, between keeping our hands busy and yakking away about our family news and dishing on the television series’ we both watch. 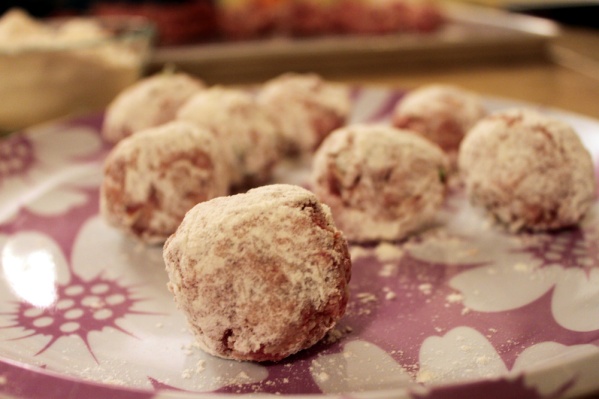 Roll the meatballs in your hands to smooth, then in flour

Linda would roll about a dozen balls in flour, then put them in the pan, turning until they were browned on several sides.  Her poor frying pan was dished out and didn’t fully sit flat on the burner, so it slowed her frying down by limiting her batches.  She made a note to buy a “decent” frying pan for future use!

Fry until browned on several sides

After we had the sheets tucked into a freezer, we took our “sample” dishes of meatballs and an iced tea drink down to the tv room to relax and watch a movie. Job well done!

Linda’s boys are both high school wrestlers and during the season they eat protein and avoid carbs. The meatballs are very easy for them to thaw in the microwave and eat during the times they’re cutting weight. Jordan has taken first in his weight at the state level for four years running, and we’re very proud of him!

I found the meatballs were very tasty even without any sauce on them. The ricotta and nutmeg alone makes them delicious. And of course the fact that we follow Michael Symon’s rule to make sure several sides of the meatballs are browned for that almost caramelized flavoring helps in the finished awesomeness.

When I called the other day to double-check how many meatballs we had made, Linda was laughing. She said the boys were breading and deep-frying them as we spoke. They were thrilled with them that way also. I suggested they try a cornmeal coating, and she said she’d pass the idea on to them. Meatballs are very versatile, I think!

Mix well and form into meatballs with a scoop. Smooth with hands and roll in flour. Fry in a nonstick skillet on medium high with a tablespoon of oil until brown on 2 or 3 sides, about 4 minutes. Place in ovenproof dish or on a flat baking sheet.

When all meatballs are browned, bake in a 350° oven for 30 minutes.

Cool and freeze on sheets, then store in zippered freezer bags. 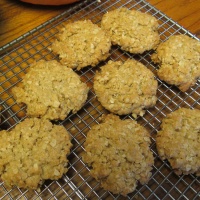