Peanut brittle was a traditional Christmas treat in our household while I was growing up. My Dad was the “Master of the Brittle”. He doesn’t remember where  the recipe came from, but he made it faithfully each year until he retired.  Then he gave me the recipe he had been keeping a secret. Dad started making brittle and everyone wanted his recipe; he wouldn’t share it.My dad was a railroad executive before he retired, and his peanut brittle became known far and wide among his men. They would come into his office and leave with a nice handful. My dad made many, many batches of brittle throughout December and placed them in a large jar in his office. He liked to keep the pieces fairly large so that the men could take a couple of pieces and have a good sized treat. 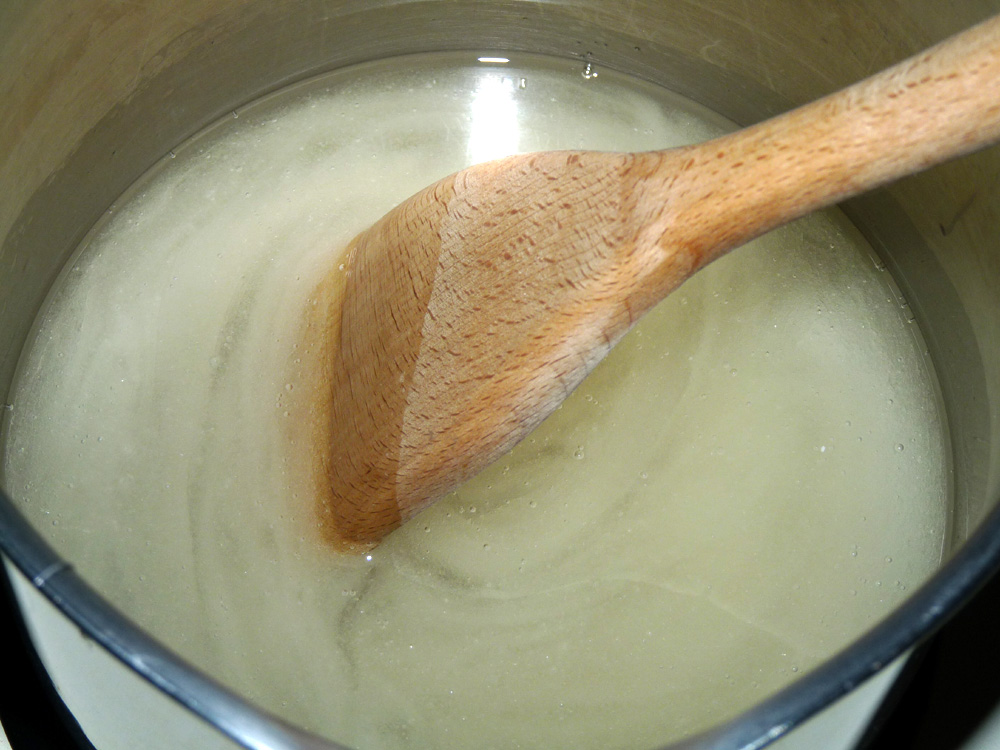 Stir over medium heat until the sugar is dissolved

I watched him make it for a few years and thought it didn’t look all that difficult to make. Watching and actually making it are two entirely different things, however. I was nervous and felt inadequate and thought I should just ask Dad to make it for me every year, the first time I tried making it. But it turned out great, almost as good as my Dad’s (it’s always better when made by Dad, of course).

When the mixture comes to a boil, add the butter

My problem in making candies, particularly peanut brittle, is if you don’t get it up to the right temperature the texture or crunch won’t be right.  Dad says brittle must crumble when you bite it, not stick to your teeth or be chewy and fight you.  The right temperature makes it just fall apart when you bite it.Temperature being the secret, I’m one of those people who never trust the candy thermometer. It always seems to take too long and I’m standing and wondering if it’s broken. Maybe I should just buy a new thermometer every year and then I’ll be sure. Or will I wonder if I bought a defective thermometer and be no better off?

This brittle is a traditional one with peanuts. My dad has always insisted they be unsalted, raw Spanish peanuts. I’ve never been a fan of the peanut part of the brittle; they always tasted unfinished to me, compared to the brittle. The peanuts are put in last, and not cooked very long. I decided I’d rather try to use roasted Spanish peanuts, and found they were exactly the taste I preferred. So I committed the ultimate sin: I adapted my dad’s family recipe. Punish me, I’m a bad daughter. 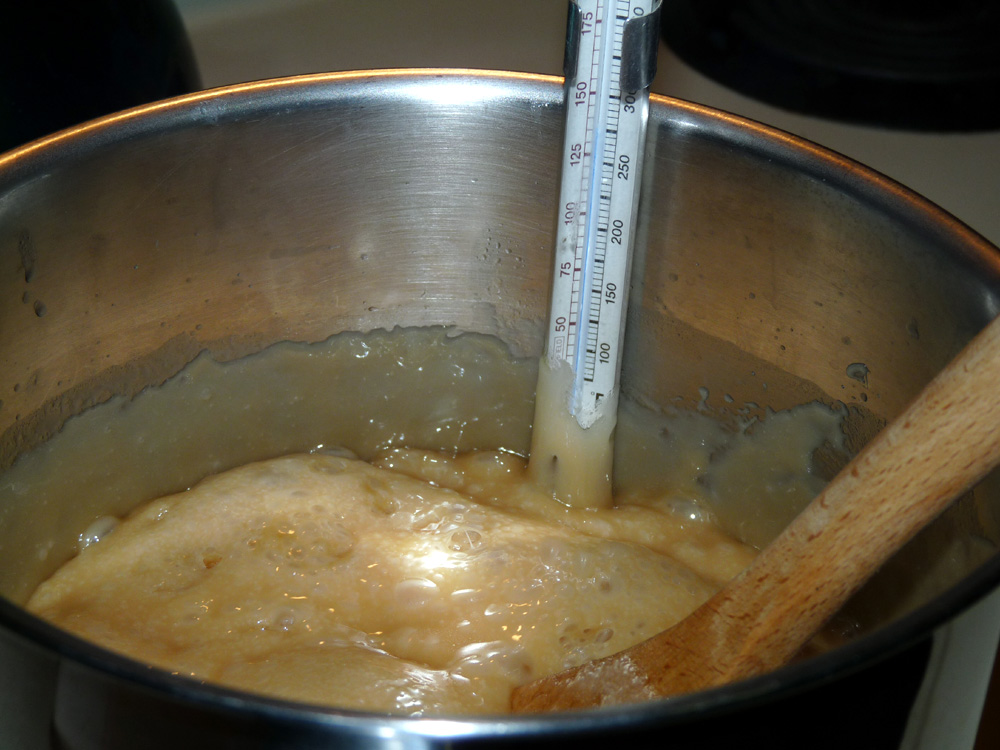 Keep stirring, it will take at least 10 minutes to reach 280

I start by measuring the sugar, corn syrup and water and bringing it to a boil while constantly stirring. Once the sugar is dissolved and it is boiling, I add the butter, put in the thermometer and let it climb to 280°F, stirring constantly.  And it takes a long time.  It seems like hours, but is maybe only 10 or 15 minutes. 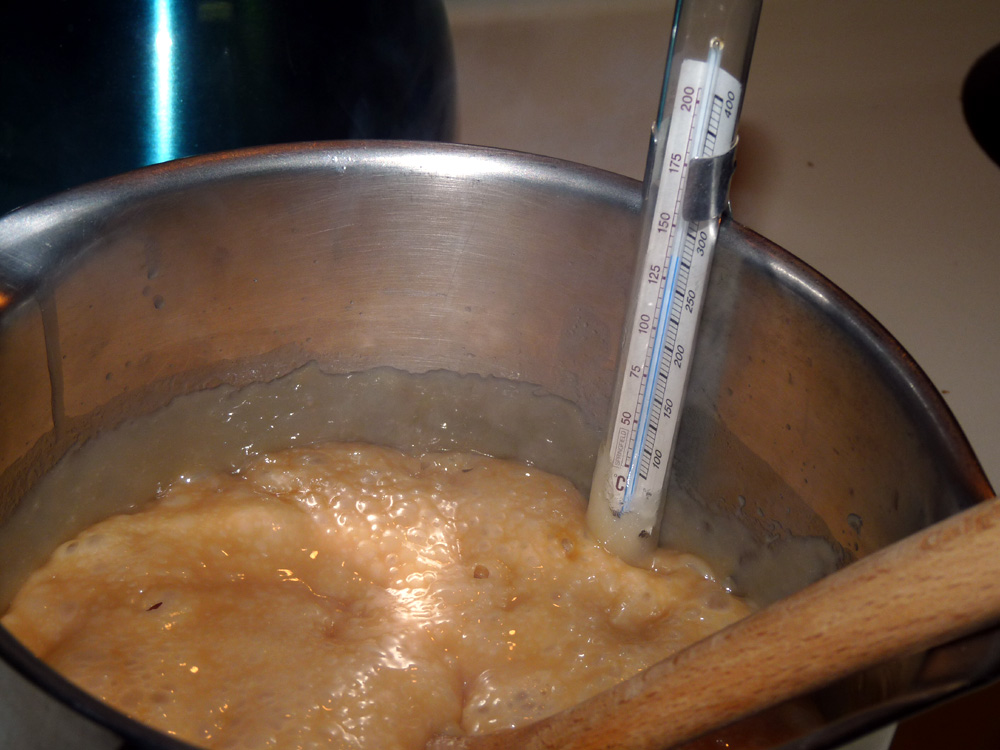 It will darken quickly as it approaches the proper temperature

At some point I dash to the baking cupboard and pull out the baking soda and measure it out so it’s ready when I need it. I never remember to do that before I start.

When the thermometer reaches 280 degrees, stir in the peanuts

When the temperature is at 280°F, I do a happy dance and add the nuts.  When the temperature returns to 280°F, in a minute or two, I remove the pan from the heat and add the baking soda and stir well. It may foam up, but it will settle down quickly. It only takes a minute or so.  Sometimes it doesn’t foam; this batch didn’t but was perfect anyway.  I don’t know why it differs from batch to batch.  *shrug*Then it’s ready to spread out evenly in the pan.  Although the recipe says to butter the pan first, my Dad never did.  It just makes the brittle buttery and messy to touch..  And it does break up into pieces nicely for storage without the pan being buttered. I use a spatula to spread it evenly and redistribute any nuts that have clumped together. That’s a culinary term, I’m pretty sure. Clumped. 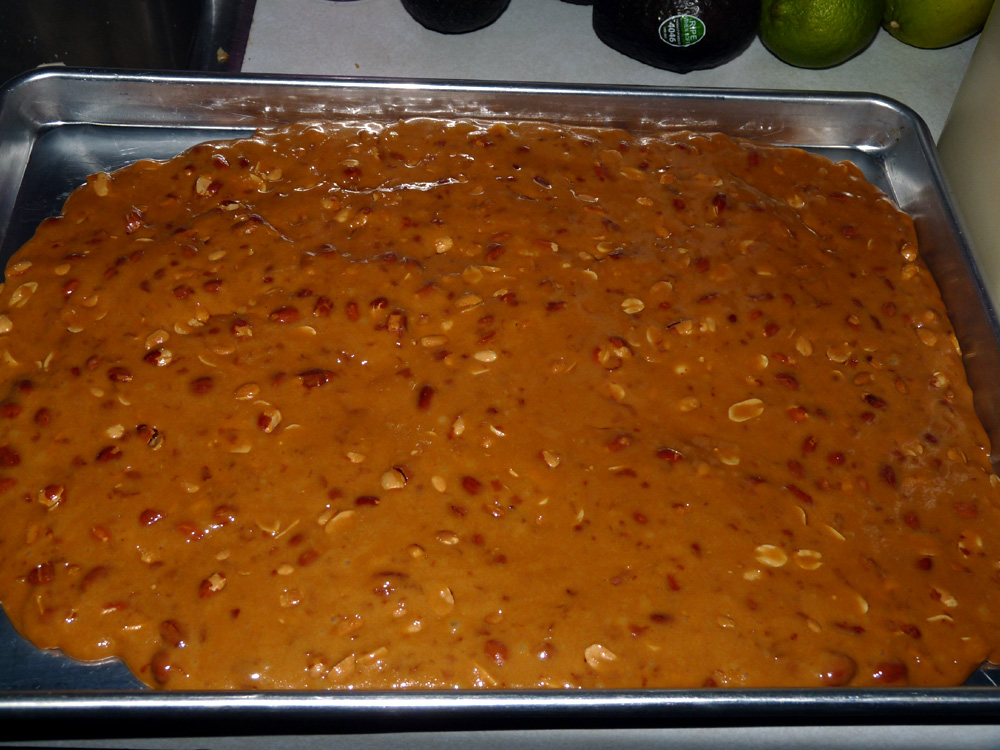 Spread brittle evenly in a sheet pan or baking sheet

Now you just wait until it has hardened and cooled, and break it into pieces. Unlike my dad, here is the rebel in me again: I like the pieces small. I never know what to do with a giant piece of brittle. Small pieces fit into the mouth better and you can always take more when that piece is eaten.Storing the brittle in a jar is actually best, my Dad was correct about that. The moisture doesn’t filter in and make it tacky. We just leave the jar sitting at room temp on the counter and it lasts for weeks and weeks. Unless we have guests, then it’s gone fast. Guests like peanut brittle. 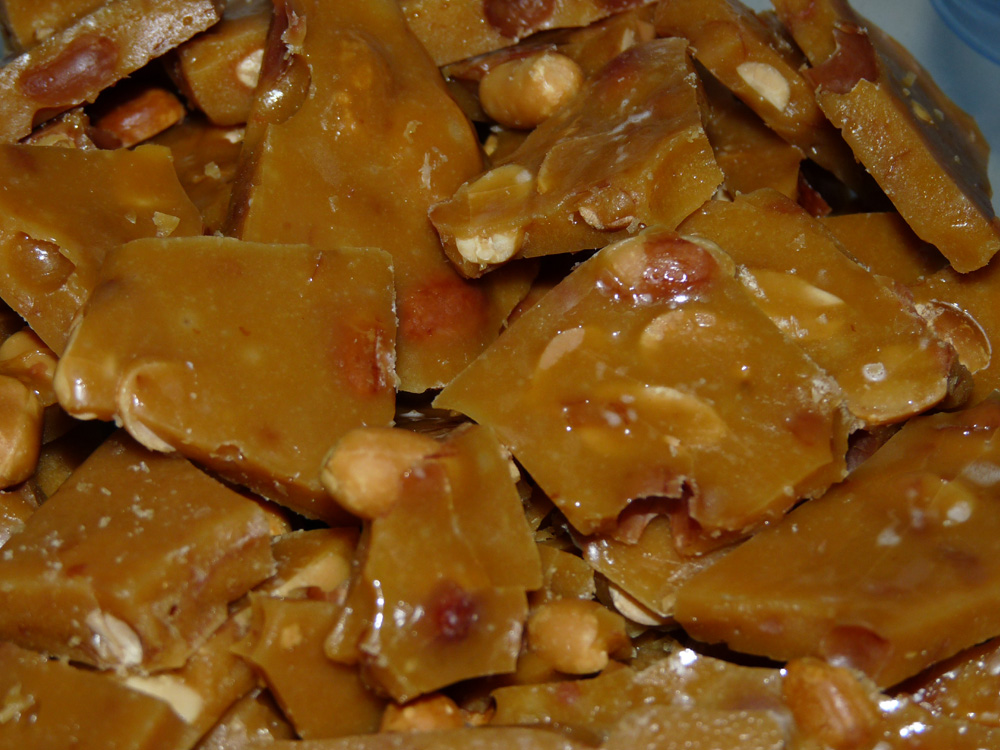 One recent year I followed a blog suggestion that I add bacon to the peanut brittle. I like to put bacon in unusual things, and brittle certainly qualified. It was, in fact, good brittle! Those who were brave enough to taste it liked it. Those who didn’t, well they were party poopers.Note:  never double the recipe.  Make each batch separately for the best color and texture.  Also cook over medium or medium high heat only, never high.  You don’t want spatters and burns!

Bring sugar, corn syrup and water to a boil over medium heat, stirring frequently until sugar is dissolved.

Blend in butter then stir constantly to 280°F on candy thermometer.  You’ll be here awhile.

Add peanuts and stir constantly until it returns to 280°F.  It will take a minute or two.

Remove from heat- blend in soda.  It may foam up, or not.  It turns out either way.  Spread quickly on cookie sheet or sheet pan.

Break into pieces when hardened and store in tightly covered container.

The recipe makes about a pound of brittle.