Cabbage Rolls in a Soup Bowl

I’ve never had any success with making cabbage rolls. Usually something is off, like the seasoning or the rice isn’t done enough or the cabbage is still tough. I gave up long ago and make what is more of a deconstructed cabbage roll, meaning the cabbage is chopped up. That seems to work best for me.

I saw a recipe where they made cabbage rolls in a soup bowl, using the same ingredients with chopped cabbage. I thought that sounded fun; I could finally have a funky name for my version of cabbage rolls. I would make soup bowl cabbage rolls and not feel like a failure!

With the huge head of cabbage from a friend’s neighbor, I could use a good quarter of the head, which is about half a regular head of cabbage. This thing was big! (See photo where I compared it to a large egg) I chopped the cabbage up into fairly small pieces and set it aside. I refrigerated the rest of the cabbage for future cooking projects, to be determined.

I really don’t think ground beef has much flavor; even when seared on medium high heat so it gets a nice brown crust on the pieces the flavor isn’t very strong. I decided to make my cabbage dish with a spicy Italian bulk sausage to get a bolder flavor since cabbage itself isn’t very strong and the small amount of tomatoes weren’t going to bring a great deal of flavor to the party either.

Sear sausage until browned on one side. Break into pieces and saute with celery and onions for a few more minutes

I seared the sausage in a dutch oven on medium high heat until one side of the sausage was caramelized and brown. I added the onions and broke the meat up into smaller pieces and continued to cook it until the onions were translucent.

Sear sausage until browned on one side. Break into pieces and saute with onions for a few more minutes

I diced about a half cup of celery and added that to the pot. 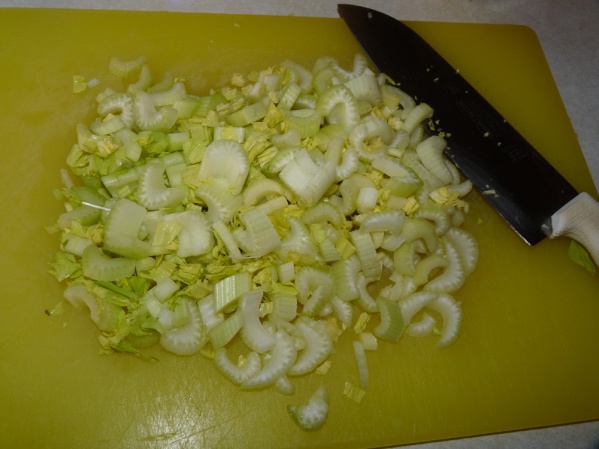 Next I diced up two large tomatoes from the garden and put them into the dutch oven.

I added the cabbage, water, rice, Worcestershire, basil, cayenne and black pepper. I carefully mixed them together and brought it to a boil, then reduced the heat and let it simmer for 30 minutes.

Then I read the recipe for the next step and frowned. Oh oh. The recipe said to add the tomatoes AFTER it simmered for 30 minutes. I had a flashback to my early years of making Jambalaya for Mardi Gras and my rice that wouldn’t soften. I eventually learned the rice wouldn’t cook after the tomatoes were added, and to make sure the rice was done before I did so. Oh oh. 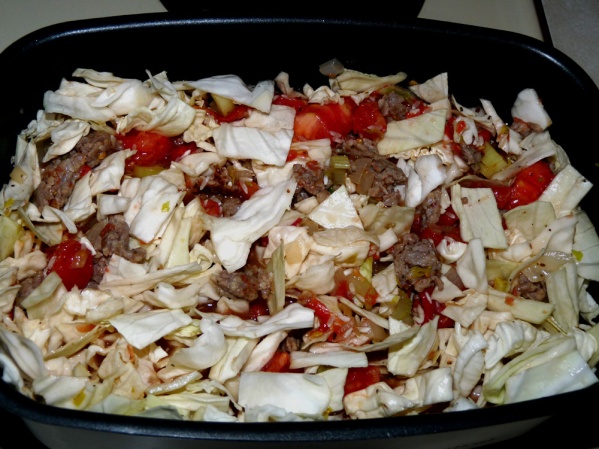 As I peered through the glass lid of the dutch oven, wondering if this was going to be a disaster, I did know enough NOT to lift the lid. That’s another no-no when making Jambalaya. The rice can get cranky once it loses that steam that has built up, and refuse to soften. I would just cross my fingers and hope. 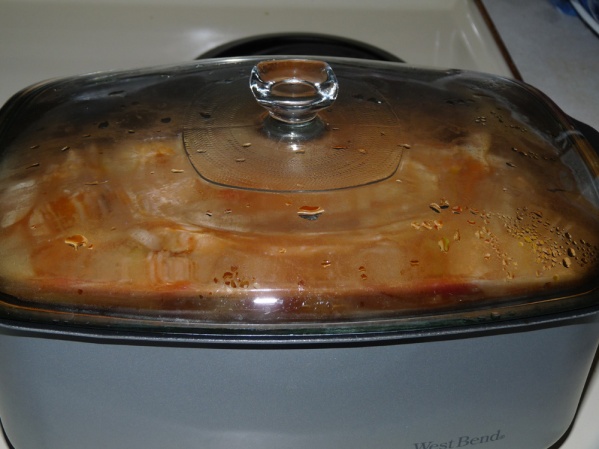 Cover and simmer for 30 minutes. Do NOT remove lid!

When the timer went off I checked the rice and wonder of wonders, it was perfectly cooked. Huge sigh of relief! I taste tested the dish and wow, it needed salt. I added about a teaspoon and let it sit for a few minutes after stirring, and it needed more salt. I added salt 3 times total; that seemed like a lot and really, we’re not salt people but I think since I used garden tomatoes that weren’t processed with a ton of salt liked the canned ones are, I needed to add more to compensate. I hadn’t added any salt earlier.

I plated the cabbage rolls into soup bowls, to make the name authentic, sprinkled them with grated Parmesan, and we devoured them. My P.S. was so happy he had seconds. I’d say the dish serves 4, but it really was three servings with just a little bit left over. It was a delicious fall treat and an excellent way to eat fresh garden cabbage and tomatoes!

In a nonstick Dutch oven, brown beef or sausage and garlic over medium high heat until meat is browned.

Stir in the cabbage, water, tomatoes, rice, Worcestershire sauce, basil, cayenne and pepper; bring to a boil. Reduce heat; cover and simmer for 25-30 minutes or until rice is tender.

Adapted from Taste of Home