Breakfast for overnight guests is easy when I plan ahead. This year during the holidays I made two kinds of individual stratas and froze them. Thawing them in the fridge the night before, then putting the foil covered pan into a  300°F oven worked well. As guests got up the stratas were ready to eat. Served with pastries, coffee and juice, it was a stress-free breakfast.

Keeping the picky eaters in mind, I stuck to two basic stratas. One was a spinach and red pepper, two cheese strata. The other was mushroom, spinach and two cheeses. If one of those didn’t suit, they could fill up on muffins, coffee cake, pancakes and fruit.

Several days earlier I’d dug out my jumbo muffin tins. I have 4 sets so I could assemble 24 at a time. I started by cutting two loaves of Italian bread into cubes and toasting them in the oven until they were lightly browned, about 20 minutes at 400°F. The time always varies depending on the type of bread and how large I’ve cubed the bread.  Mostly I just eyeball it until they look right, setting the timer for 5 or 10 minutes at a time so I don’t forget to watch and they get too dark. 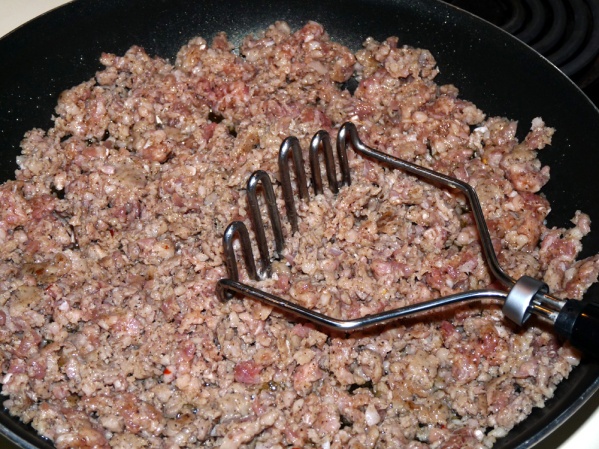 Brown the sausage and break apart into smaller pieces

I coated the insides of the muffin cups with cooking spray, then put the first layer of bread cubes in each cup while I browned the sausage in a large nonstick skillet. I made sure it browned well on one side, for the best flavor. I used a potato masher to separate it into smaller pieces once the first side was browned and lightly caramelized.

Layer the sausage on top of the bread cubes

I spooned the sausage over the bread cubes in the cups.

Saute the red pepper until browned on the edges

I diced up a sweet red pepper and sautéed it in my large skillet, then sprinkled it over the cups, then topped them with a handful of sharp cheddar cheese.

Add red pepper and cheese to the cups

I put another layer of bread cubes into the cups, then mixed the eggs, milk, salt, pepper and ground mustard with a whisk and poured it slowly over the tops of the cups.

I made sure that most of the bread cubes were covered with the egg mixture.

Cover the cubes with the egg mixture

I sprinkled the tops of the stratas with the Monterey Jack cheese and let the pans set for an hour to absorb.

Top with Monterey Jack and let set an hour to absorb

My oven was preheated to 350°F, and I slid two pans into the oven and set the timer for 30 minutes. They looked so good as they rose up and turned golden brown in the oven. I almost hated to remove them, knowing they would flatten somewhat. 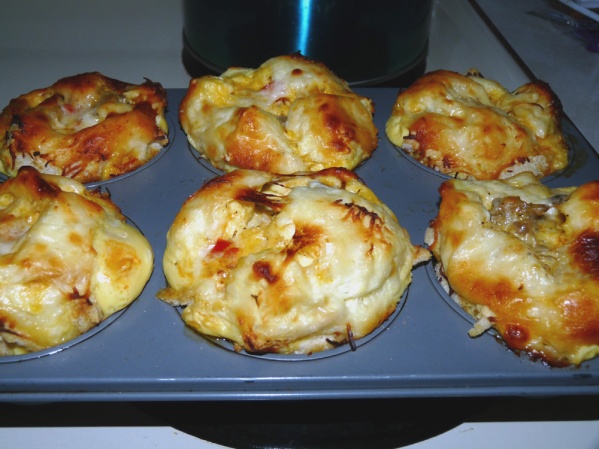 The stratas will rise and turn golden brown

I let the stratas cool on a rack for 20 minutes, then used a knife to loosen and remove them from the pans onto the racks. I cleaned out the pans and made a second batch with equally good results.

Once the 24 stratas had cooled to room temp, I packed them into two containers and froze them. The night before Christmas I moved them to the fridge to thaw. The next morning I placed them on a sheet pan and covered it with foil. I heated them in a 250°F oven for about 30 minutes, and they were hot and delicious. Everyone was pleased to wake up to hot stratas and the other side dishes. 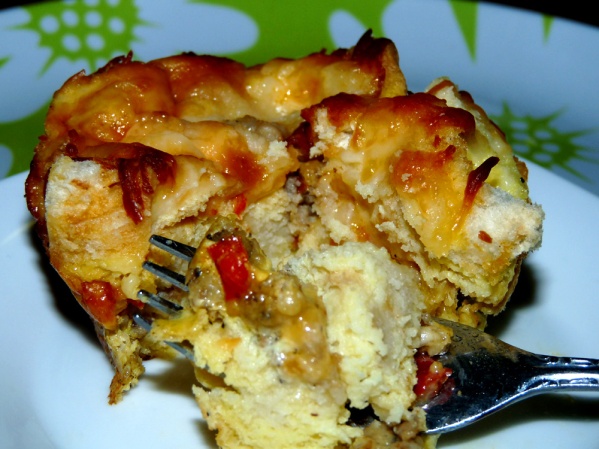 It was the easiest way to serve guests and not have to bustle around cooking and cleaning up afterwards. The cleanup was easy since I’d lined the pan with foil and could simply toss it afterwards.

My recipe made 24 jumbo stratas; you may want to cut the recipe in half unless you have a large crowd. Or make the whole recipe and freeze them for quick morning reheats in the microwave. That’s even handier!  I had frozen leftovers for several weeks that were great for quick breakfasts when I remembered them!

Fry sausage in a large skillet until browned on one side. Break up into smaller pieces and fry until sausage is no longer pink.

Place a layer of bread cubes in the muffin cups. Layer sausage over the top.

Saute diced red pepper in skillet until it begins to brown on the edges. Sprinkle over the top of the cups.

Sprinkle the cheddar cheese into the cups, followed by another layer of bread cubes.

Let stand for one hour to absorb the milk mixture.

Place in oven and bake for 30 minutes. They will rise and turn golden brown, then deflate a bit after they are removed from the oven.

Eat while hot or cool and refrigerate or freeze to reheat later. 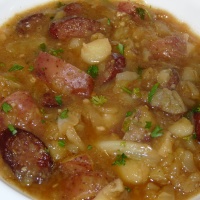