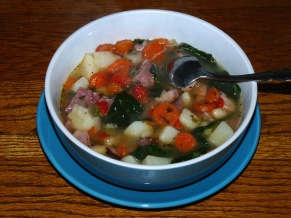 I seem to be posting a lot of dishes this winter that are “blizzard” recipes. Cooking takes my mind off being unable to see across the street. Not that being able to see across the street is necessary when I’m lying on the couch in wrinkled flannel pajamas eating chips out of the bag and watching shows off my dvr. It’s just knowing that I can’t see far makes me want to.

My P.S. (Pork Shopper/hubby) brought home a big ham that I’d requested and I was ready to trim off the meaty parts and simmer the bone for a couple of hours. Of course the steam from the soup pot made the windows all moist so I couldn’t see out anyway. But the smell of ham and onions all afternoon was pleasant.

Winter dries out the house so much it was nice to feel like we almost had a steam bath going here.  I ended up with about 2 quarts of broth after I strained out the bone and bits and pieces I’d thrown in the pot from trimming up the meat. I returned the broth to the stove and brought it back to a boil.

Strain out bone and trimmings

I’d diced up a large onion and 2 ribs of celery along with 3 large sliced carrots.  I also diced up a red sweet bell pepper and added all of the veggies to my soup along with about 3 cups of cubed ham.

I peeled 3 pretty large potatoes and diced them up. I stirred them into my pot with the seasonings and let it simmer at medium for 15 – 20 minutes.

Add veggies, ham and beans and simmer for 20 minutes.

I would have liked to use cannellini beans but only had white kidney beans on hand. Not a huge difference, so I drained two cans and added them to my soup. I let the pot simmer for another 5 minute or so to let the beans heat through.

My P.S. had reported back after his last shopping trip that our usual grocery store was out of kale, and bought spinach as a substitute. They really are very interchangeable so I roughly chopped half of the bag of fresh spinach and stirred it into the soup. I let it wilt and the soup was ready to serve.

Add spinach or kale and cook until wilted.

It was a nice combo of flavors, with ham being the most dominant flavor. The red pepper flakes added a bit of heat, and that was perfect on such a cold evening. I’d recently bought a new Panini grill so we grilled sandwiches with our soup so we could dip them in the broth. Mmm.. a winter’s feast! 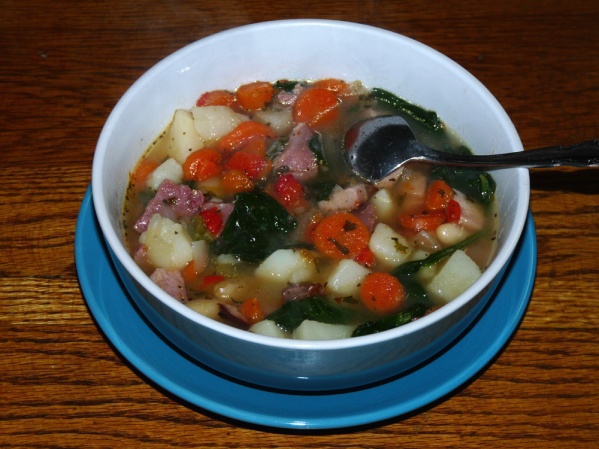 I refrigerated the leftovers and the soup was quite spicy when eaten days later again. Those red pepper flakes just keep on melding and percolating the spicy factor up even in the fridge!

Simmer ham bone and onion discards in 3 quarts of water in a large soup pot for 1 1/2 hours. Strain out the bits and replace the broth in the pot.

Add garlic powder, onion, carrots, celery, pepper and ham.  Add potatoes and bring to a boil, then reduce to medium; cook for 20 minutes or until potatoes are fork tender.

Add beans and cook for another 5 minutes until heated through.

Taste test for seasoning, adding salt and pepper as desired.

Stir in kale and let cook until it is wilted, another 3 or 4 minutes.