It’s still winter! Chicken and dumplings must happen! They are one of the best things about winter. They’re full of creamy chicken goodness. I wanted to make a pot the other day but would be gone for a few hours. I decided an adaptation made in my slow cooker would work so I could come home to one of my favorite dishes.

I have a West Bend slow cooker that has a pot I can use on the stove, in the oven, or on its own plug-in base. It’s super handy for starting something with frying, then covering and letting it simmer on the base all day long. If you don’t have one, you could do use an ovenproof pot instead, and after using it on the stovetop, putting it into the oven on about 250°F for the 5 hours. I’ve not tried that but I’ve been told it’s a good substitute. You could also use a regular crockpot but the dumplings wouldn’t turn out the same in this recipe. You’d need to transfer the mixture to a big pot before doing the dumplings.

I’d pulled two boneless, skinless chicken breasts out of the freezer the previous night, intending to use them in something for supper the following night, so I was actually thinking ahead. They were nearly thawed, and I easily cut them into smaller pieces and set them aside. 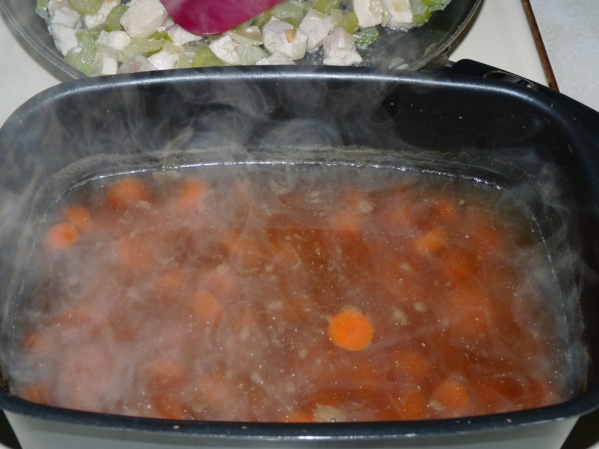 Bring broth to a boil and add carrots

I put my slow cooker pan onto the stove on medium high and added 4 cups of chicken broth to it, bringing it to a boil. I sliced up 8 carrots (about 4 cups) and added them to the boiling broth. I knew they’d take a bit longer so they should have a head start. I let them bubble on medium heat for about 10 minutes. 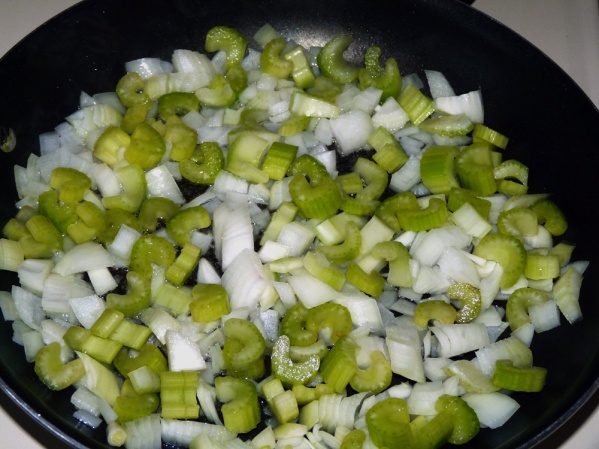 Saute onion and celery until onion is translucent

In the meantime I chopped up 3 stalks of celery and a half a medium onion and put them into a large skillet with a little oil to sauté.

When the celery and onion were translucent, I added the chopped chicken breast to the skillet and fried it until it was no longer visibly pink. I added the skillet’s ingredients to the slow cooker pot. 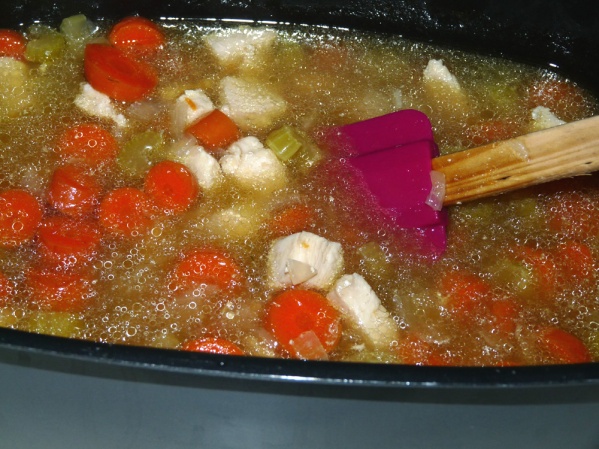 Add celery, onions and chicken to the pot

When the pot had come to a boil again I removed it from the stove and set it on its base that I’d plugged in and set to High. My slow cooker cooks on the low side so I usually have to set it on high. I put the lid on the pot and let it cook away for 5 hours. 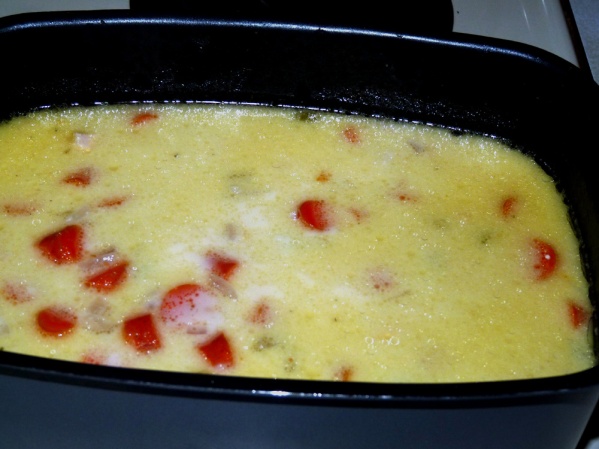 When I returned from my errands the pot was bubbling away. I added the heavy cream and ½ teaspoon black pepper to the pot and put it on the stove on medium high. I let it come to a boil again as I stirred together the dumpling mixture. I taste test it at this point also, but rarely add any salt as my vegan chicken broth cubes are salty enough for our tastes.

Measure dumpling ingredients into a bowl

I stirred together the dumplings and dropped them by tablespoons into the bubbling pot. At that point I usually panic and wonder why it’s a mass of mess on top and oh my goodness did I forget something? But I put the lid on the pot askew (the recipe says “halfway”) and set the timer for 30 minutes.

Drop by tablespoons into the pot

At 30 minutes the dumplings are done and I break them into smaller pieces before serving the chicken and dumplings in large soup bowls.

Put lid on the pot halfway

We love this dish. My P.S. moaned through the bowl and had seconds. Two nights later the microwaved leftovers were equally delicious.

It’s an uncomplicated chicken dish that was easy to cook and doesn’t need any seasonings or frills. P.S. suggested adding frozen peas next time which I will probably do. I like that it’s simply veggies and chicken and dumplings. Potatoes aren’t necessary but you could add them if you want some extra calories. Heh 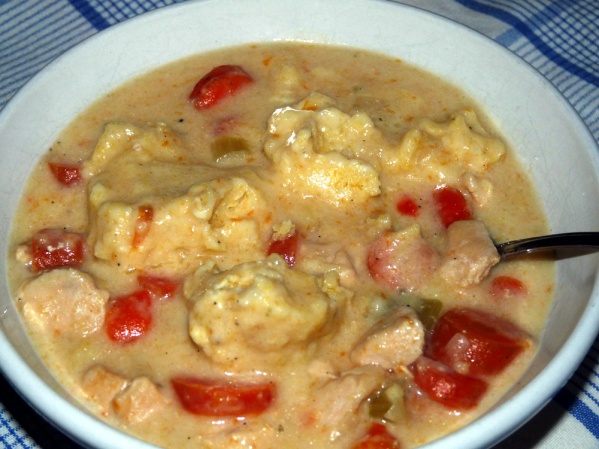 Bring 4 cups of chicken broth to a boil in the pot of a slow cooker that is stovetop safe. Add sliced carrots and cook over medium heat for 10 minutes.

Saute celery and onions in a little oil in a large nonstick skillet. When they are translucent, add diced chicken and sauté until it is no longer pink. Add to pot of carrots.

Place slow cooker pot on base and set for High. If your pot runs hot, you might want to use Medium instead. Set timer for 5 hours.

After 5 hours put pot back on the stove on medium high and stir in the heavy cream.

Make the dough for the dumplings: stir together dry ingredients then add half-and-half and stir to combine. Set aside.

Pour heavy cream into the pot and stir to combine.

Drop tablespoons of dumpling dough into the simmering pot. Cover pot halfway and continue to simmer for 30 minutes. Check seasonings; add salt if needed. Allow to sit for 10 minutes before serving.

Dumplings adapted from What’s On My Menu.