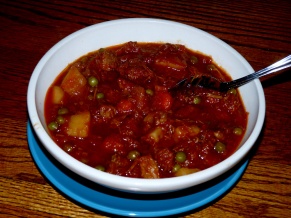 I decided to invent a blizzard beef stew. After our 7th blizzard of the year, things had slowed down and our work schedules got a bit messy. My P.S. (Pantry Stocker/hubby) bought a roast and I knew neither of us would have time to make it that week. The solution was to throw it in a crockpot and make it ahead of time.

For dinner I’d planned to make turkey meatballs from the ground turkey we’d thawed. I made the crockpot of beef stew for the next evening. I’m just not comfortable with using a crockpot since I’ve not had much experience with them. I’d rather be home to check on it once in awhile to make sure the timing is right and it’s not going to be undercooked or overcooked. 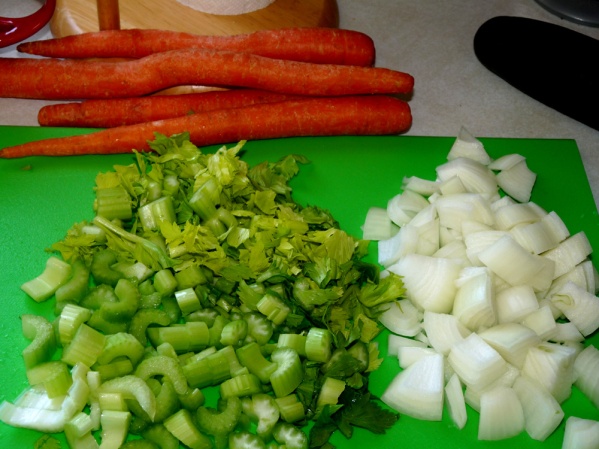 I frankly just need to use a crockpot more so I trust the timing. This was a good day to learn how dependable my slow cooker is. I like that it removes from the base and can be used on the stove and in the oven, but the heat level when it is on the base seems lower than regular crockpots. That would be no help if I post a recipe and say “cook on high for 8 hours” and your crockpot burns the dish in 8 hours on high!

Bring the broth and carrots to a boil

I started by adding 3 cups of beef broth to my slow cooker and set it on the stove on medium high. I brought it to a boil, and then added 4 sliced carrots.

Cut the roast into cubes

I cut my eye of round roast into chunks and I heated a large nonstick skillet on medium high with a little oil. I seared my beef chunks until they were browned in places then added them to my slow cooker. I later read my recipe and it said to toss the beef in flour before searing. Whoops!

Toss the beef with flour and saute until they are browned

It turned out fine without that step, but I think the flour would have thickened the stew a bit more than it was. I could have added a thickening later, but we liked the consistency as it was. I’ll list the flour method in the recipe, but you could omit it if you want to avoid flour.

Saute onions in the same pan

In the same pan I’d fried the beef in, I added another drizzle of oil and sautéed a diced onion for a couple of minutes then added the diced celery, complete with tops. After 3-4 minutes they were lightly browned and I added them to the slow cooker. 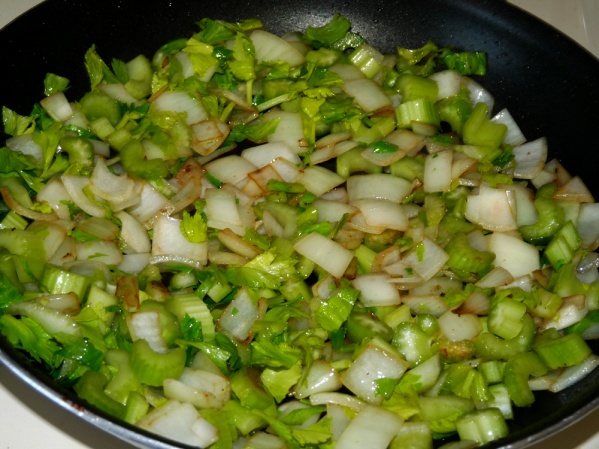 I wanted a tomato base to the stew so I added a large can of crushed tomatoes and a regular sized can of diced tomatoes. Wanting more tomato flavor I added a small can of tomato paste as well.

I diced 3 large potatoes, leaving the skins on because they were so pretty, and added them to the slow cooker. I put a bay leaf, a teaspoon of garlic powder, a tablespoon of Worcestershire, a teaspoon of salt, a teaspoon of black pepper and stirred the seasonings into the stew.

I put the lid on the slow cooker, made sure the heat was on high, and let it cook. I peeked and stirred every two hours, making sure it was obeying. After 8 hours it was done. I added 2 cups of frozen peas. They’d melt and be reheated the next day anyway. The potatoes weren’t falling apart, but they were fork tender. I shut the base off, left the lid off, and let it cool for an hour.

After a night in the refrigerator that further melded the flavors, the stew was excellent microwaved for dinner. It had just the right amount of veggies and the beef was melt in your mouth tender. I liked the tomato flavors in the stew’s gravy which were great when sopped up with some crusty bread. All in all it was a success. 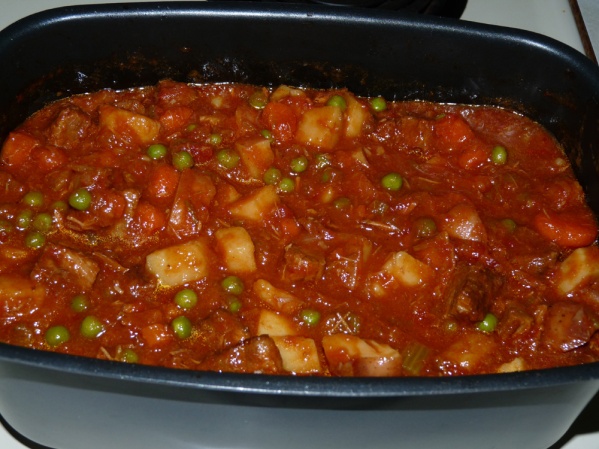 But it wasn’t really a success for posting, in that if you have a regular crockpot and no Westbend slow cooker, you won’t know exact times. I can only suggest you make the recipe the first time when you’ll be home all day, then you’ll know how many hours it takes to reach your level of done-ness in your particular appliance. 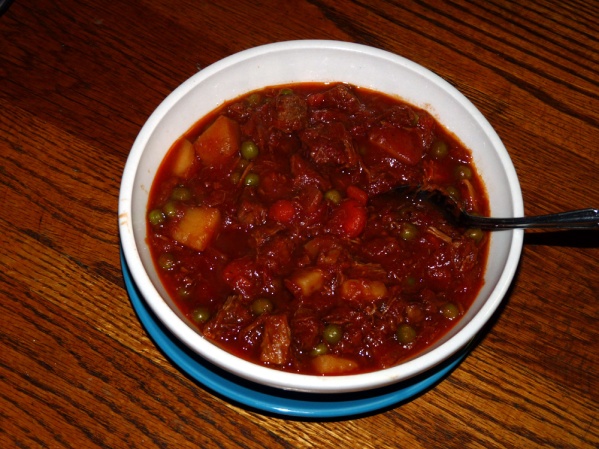 Now that I know it takes 8 hours in my slow cooker, I think I will make it again in a crockpot and see if that is any faster. I’ll update the post if I do. Making it in a crockpot will mean adding the broth and carrots to the crockpot from the start, then adding the rest of the ingredients as they are ready.  Maybe I’ll make that after blizzard #8. It’s been a bad year; I expect we’ll have more of them!

Toss cubed beef with flour and fry in oil in a large nonstick skillet until browned.  Add to pot.

In same skillet add another drizzle of oil and fry onions until translucent.  Add celery and cook another 3-4 minutes. Add to pot.

Bring pot to boil again, then pour into a crockpot or move to slow cooker base.

Put the lid on the slow cooker and set dial to high for 8 hours.  My slow cooker runs cool so a crockpot might take 5-6 hours on high or 8 hours on low.  Your cooker may vary.

After 8 hours, the potatoes should be fork tender.  Add frozen peas and cook another 10-15 minutes until they are heated through.