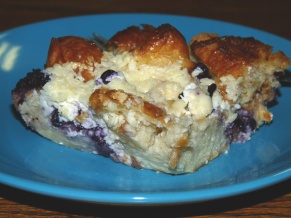 This recipe was originally called Blueberry Puff, but I don’t see where the puff is. It did raise up a little while baking, but settled back down and is decidedly unpuffy. I think a much more apt name would be Blueberry Pan Danish. It’s like a giant blueberry and cheese Danish in a 9×13 pan.

The recipe was made in an 8×8 pan and the blogger noted that as fast as it disappeared, it should be doubled. So I took her advice and did exactly that. I never see the point in making an 8×8 pan of anything. Food worth baking should be made in a 9×13 pan. Freeze portions if you have to, but go the extra step while you’re baking anyway!

I’ve converted the recipe below for the 9×13 pan. If you still insist on only making an 8×8 pan, just use half of each ingredient. I didn’t modify the recipe in any way besides doubling it. 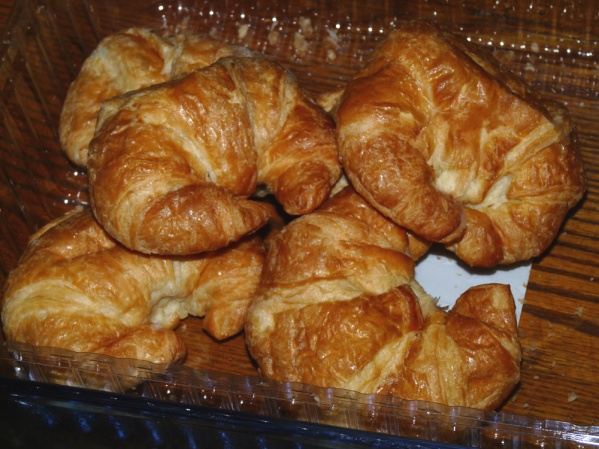 I’d bought a large box of butter croissants to use for an egg bake and this blueberry bake. I had 6 croissants left that I didn’t get to for several days. No problem, they were still fairly fresh and if a little dry, not a problem. They were going to be drowned in a cream cheese/egg mixture anyway. 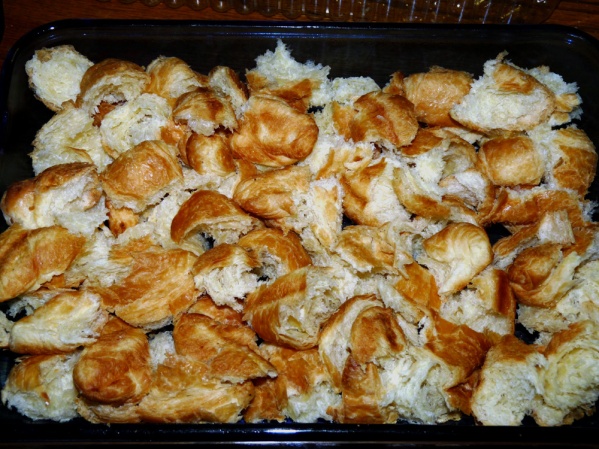 I sprayed my 9×13 baking dish well, then tore up the croissants and layered them into the dish. 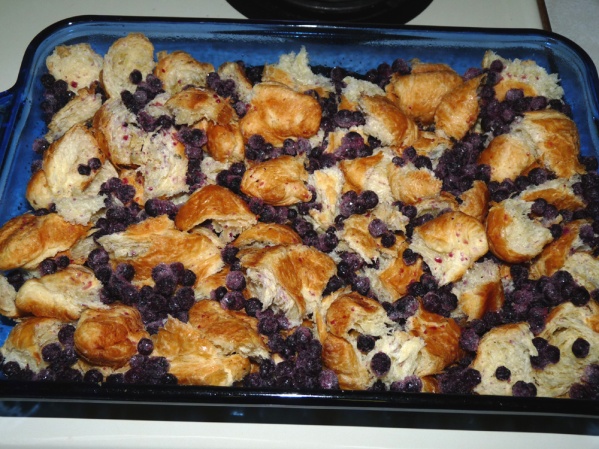 Layer blueberries over the croissant pieces

My cream cheese was room temp; it had been setting on the counter for about 6 hours. Up North, that means it was cold outside, but about 68°F in my kitchen. I put the cream cheese blocks into a bowl with the eggs, vanilla and sugar and beat it with my handheld mixer for several minutes. 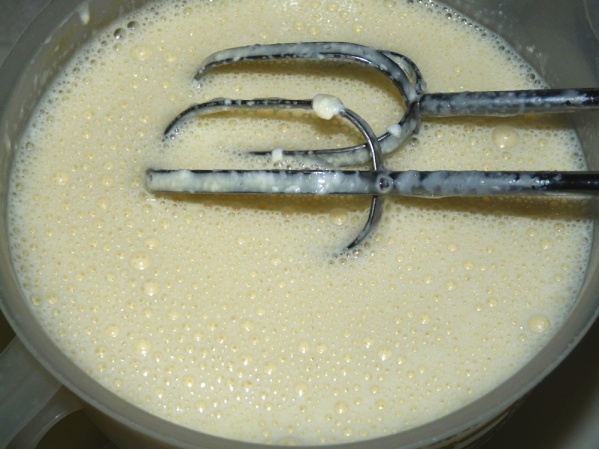 The mixture was mostly creamy, but had a few little lumps here and there that I assumed was normal.

I added the 2 cups of milk a little at a time and started to wonder if I’d done something wrong. A quick dash back to the recipe on the kitchen computer and it read the same as I’d done. It didn’t mention that the mixture would now be lumpy like cottage cheese (or like someone had barfed in my bowl). I beat it again with the mixer and it just wasn’t getting smooth. I didn’t dare heat it, as the eggs would scramble or something. 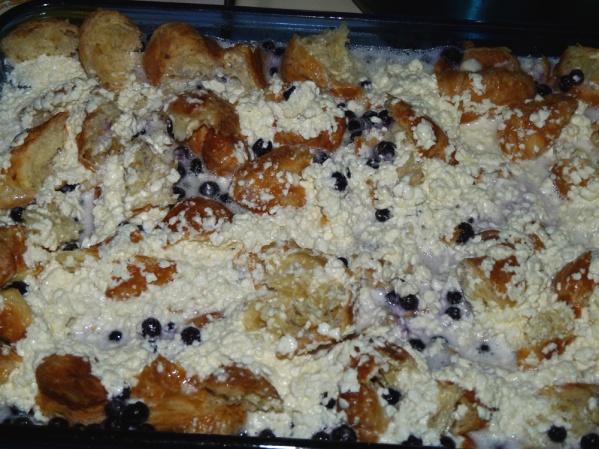 Pour over layers in pan

I gritted my teeth and continued on, hoping I was doing this correctly. I poured the cream cheese lumpy batter over the croissants and oh my, it now looked like someone had barfed on my breakfast bake. It wasn’t looking very tasty, and I decided not to panic. It is what it is, right?

I covered the dish with foil and let it set for 20 minutes as directed. I preheated my oven to 325°F and when the 20 minutes was up, slid it into the oven, covered. I baked it for 30 minutes, then removed the foil and baked it another 30 minutes. 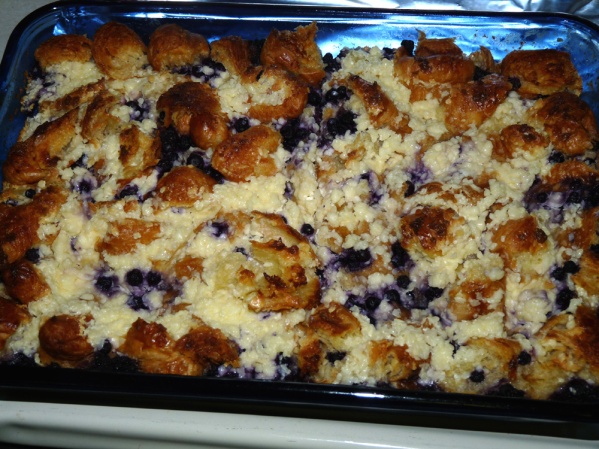 The center was a bit runny yet, probably due to my doubling the recipe, so I let it bake another 40 minutes. Perfect! The center was firm when I cut into it. I removed it from the oven and let it cool for about an hour.  It was looking amazingly like a pan of Danish! 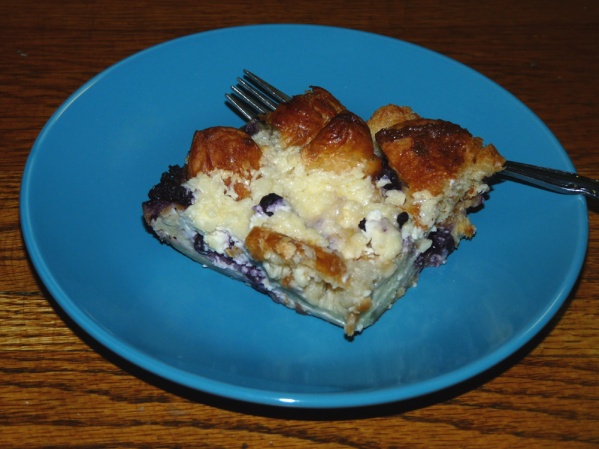 I cut the pan up into 12 pieces and tried a slice. It was great! The Maine wild blueberries I use are a good mix of tart and sweet, very flavorful. They came through beautifully when matched with the cream cheesy goodness and the buttery croissants. My P.S. said it was delicious, but he thought it was more of a bread pudding rather than a fluff or a Danish. 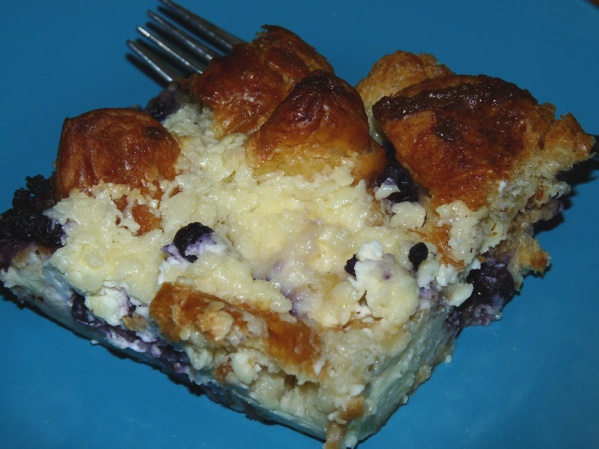 The recipe suggested an optional sprinkling of powdered sugar on top, which we didn’t use. I liked that it wasn’t super sweet. It was rich and tasty without a ton of sugar. It really was like eating a blueberry cheese Danish, and so that is what I’m going to rename it. The dish deserves a more descriptive name! 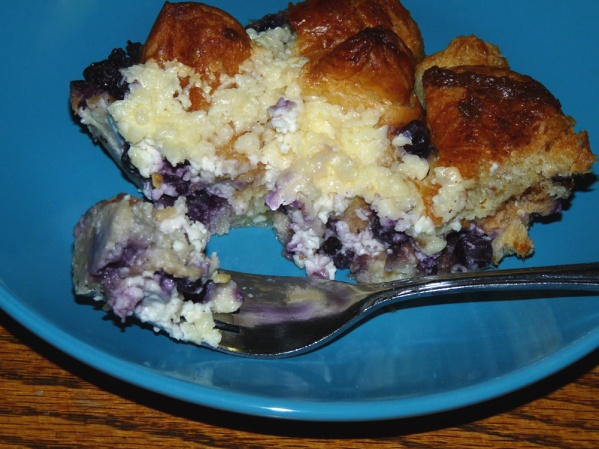 I’d like to make it again with raspberries. I’ll let you know the outcome on that. I have a couple of cups of frozen raspberries, now I just need another box of croissants!

Tear croissants into pieces, about 1” in size. Spread evenly in baking dish.

Sprinkle blueberries over the croissants, shaking a little to get them down into the crevasses.

Beat cream cheese, eggs, sugar and vanilla with an electric mixer in a large bowl. When smooth, add a little milk at a time, beating until well mixed. Mixture may be lumpy. Pour over croissants evenly.

Cover dish with foil and let sit for 20 minutes or even overnight.

Bake in oven for 30 minutes covered, then remove foil and bake another 30-40 minutes uncovered. Knife will come out clean and center will be firm when tested.

Adapted from The Cutting Edge of Ordinary