Philly Cheesesteak in a Bread Bowl

Philly Cheesesteaks have never really interested me because I’m not a big fan of beef. I like a juicy grilled burger once in awhile, with lots of pink in it still, but I could take or leave roasts, ribs or steaks. My P.S. adores beef and can once in awhile talk me into a steak when he’s grilling, but I definitely want a small portion.

When I saw the picture on The Cozy Apron blog for the Philly Cheesesteak Stew, I was charmed. With the cheese and caramelized ones, which I love, I could see me eating this stew. In a hollowed out bread bowl? For sure!  I would definitely eat beef this way!

I asked my P.S. to get me steak for the recipe. He asked what kind and I read the recipe: top sirloin or rib eye. We happened to stop at the grocery after having lunch out one Saturday, and he asked the butchers he knew if they would slice me some sirloin very thin. They can’t slice it on the meat slicer since it’s such a soft meat, but one of the guys volunteered to slice it with a knife.

Ten minutes later he came out with three pounds of thinly sliced steak and we were ready to roll. Later that day when I started the recipe for dinner I was horrified to realize the butcher had cut it into horizontal slices, not vertical. He must have thought we were crazy, wanting steak sliced in big thin slabs like that! I had to cut it into strips to make it easier to handle. The poor guy, I must make a point to apologize to him for the confusion!

Toss the steak with salt and pepper, then toss again with flour

Sear on one side, then flip and sear on the second side

I’d heated a large nonstick skillet to medium high heat and put in half of the steak. I let it sizzle and brown on one side, then flipped it so the second sides were browned. The meat seared fast, it was maybe 2-3 minutes total. It’s still a little pink when done but it will cook more later, never fear! Do not overcook it at this point.

Sear in two batches, then set aside

I seared the second half of the steak and when done added that to the bowl of meat as well.

Cut pepper and onion into strips

Next I added some oil to the skillet and fried the onions until they began to brown. I added garlic powder and salt and thyme.

Saute onions in a drizzle of oil until browned

I added the mushrooms and sauteed for 2 or 3 more minutes.

Add mushrooms and saute another 2 or 3 minutes

Next I added the remaining flour and stirred until it was coating the onions.

I’d heated the beef broth and added 2 cups to the skillet a little at a time, stirring and waiting until it had thickened before adding the next portion. The recipe called for 4 cups but I found that was too much and cut it back to 2 cups the next time I made it.

Add broth a little at a time, stirring until it thickens each time

I let the mixture come to a bubble then turned the heat down to medium low to simmer for the suggested 30 minutes. About 10 minutes before it was done simmering I added the sliced peppers I’d added to the recipe which was a suggestion on the blog. I used a big yellow sweet bell pepper.  The beef was added and the skillet simmered a few minutes while the beef was heated through.

In the meantime I’d cut circles into the large buns I’d bought to be my soup/stew bowls. I used my fingers to remove a lot of the insides and set them aside. I covered a sheet pan with foil and set the buns on the foil.

Tuck a slice of cheese on the bottom of the bowl, then fill with stew

I folded a circle of provolone in half and tucked it on the bottom of each bun. I wanted melted cheesy goodness throughout the eating of this stew.  I ladled the stew into the buns to the top, then topped the buns with two slices of provolone. 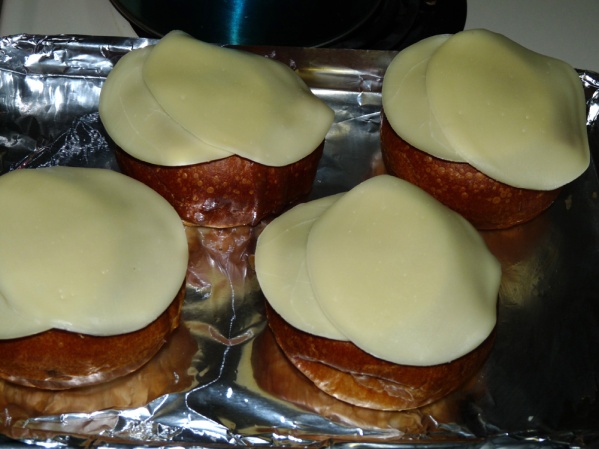 Top each bowl with two slices of cheese

I slid the pan into the oven and broiled the finished stew bowls just until the cheese was melted and beginning to brown, maybe 3 minutes.

Melt until the cheese is melted and browned

I served the bowls hot with the extra pieces of bread I’d removed from the buns for dipping. We were totally pleased with the rich flavor of the stew and how spot on it was. It truly was like eating a Philly Cheesesteak sandwich with a spoon. Beefy and cheesy and oh so good.!  It made me rethink my opinion on eating beef.

Serve with the removed pieces for dipping

The steak was tender and melt-in-your-mouth good. Usually I hit that gristle or fat and it’s a deal breaker for me. This was nothing like that, and for the price we paid per pound for Angus top sirloin (the only kind of beef we have around here), it lived up to its value. With just a slight amount of work, I could see eating this more often!

We had leftovers for two more servings which I froze and brought to my sister’s house a few weeks later.  I reheated the filling, scooped out two large rolls and filled them with cheese.  I poured the filling into the buns and topped them with more cheese.  I broiled them in the oven just long enough for the cheese to melt and they were super delicious all over again.  We ate them while watching movies, part of our traditional girly weekends.

Put steak strips into a bowl and toss with garlic powder, salt and pepper. Add 2 tablespoons flour and toss again to coat.

Add a drizzle of oil to the skillet and brown the onions for a few minutes until they are translucent. Add the garlic powder, salt and pepper and the remaining 2 tablespoons of flour. Stir until the onions are coated with the flour.

Add beef broth, ½ cup or so at a time, stirring between until it is fully incorporated and thickened to avoid lumps. Bring to a bubble, then reduce heat to medium low and simmer for 30 minutes

Add peppers the last 10 minutes. Add beef after the 30 minutes and let simmer a few more minutes to heat through.

Cut a circle in the top of each bun and remove most of the insides. Set on foil covered pan. Spoon stew into each bread bowl and top with two slices of provolone.

Place the pan under the broiler for 2-3 minutes until the cheese is melted and begins to turn golden.

Serve hot with the removed pieces for dipping.

Adapted from The Cozy Apron