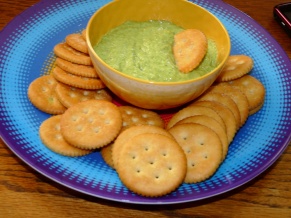 My P.S. (Pretty Smart/hubby) and I discussed what to name this recipe. Asparagus Hummus was too simple. We came up with Hummagus, which made us laugh, then Asparammus, which was funny as well as a groaner. I suggested Asparagusummus, and we agreed we could wish people a Happy Asparagusummus.

I’ve mentioned before that I’m not much of a hummus fan. It’s too bland for me. A friend said I needed to experiment with different recipes and “make it my own”. I’m still trying to do that. I posted a spinach hummus recipe previously and it was ok after a few modifications. When I found an asparagus recipe recently I was ready to try again.

I love when my P.S. brings home asparagus. Every year when it comes into season in February and March, I’m surprised. We’re still buried under giant snowdrifts and have at least 3 months left of winter and somewhere they are growing these luscious green stalks. I’m jealous. But I immediately start digging out recipes.

Asparagus as a dip was interesting. It looked pretty simple and I even had the rest of the needed ingredients including two lemons I pulled out of the bottom of the fridge fruit drawer. Note to self: lots of limes still in there, find a recipe!

Blanch for 4 minutes in boiling water

I snapped the bottoms off of the asparagus, that’s always my favorite part. The woody ends snap right off and what remains is crispy green perfection. I feel just a tish guilty that I’m throwing away those ends but I’ve tried to use them and they are quite bitter as well as being tough.

The next step is to put it into iced water, but up North here this time of year all you need to do is run the water for a few minutes and the water is incredibly cold straight out of the faucet. I filled the sink with cold water and when the timer went off I strained the asparagus into a strainer, then poured it into the cold water.  I let the asparagus chill for a few minutes, then put it in a strainer again before putting it into my food processor.

Rinse chick peas and remove as many skins as possible

Next I played with the can of chick peas. I like my hummus to be creamy and removing as many of the skins from the chick peas makes it smoother. I empty the can into a large bowl and fill it with cold water. I use my hand and rub the peas between my fingers to loosen the skins. They float around and I empty the water into my sink and refill the bowl. I do this over and over until I’ve removed most of the opaque skins and have just clean yellow chick peas left. 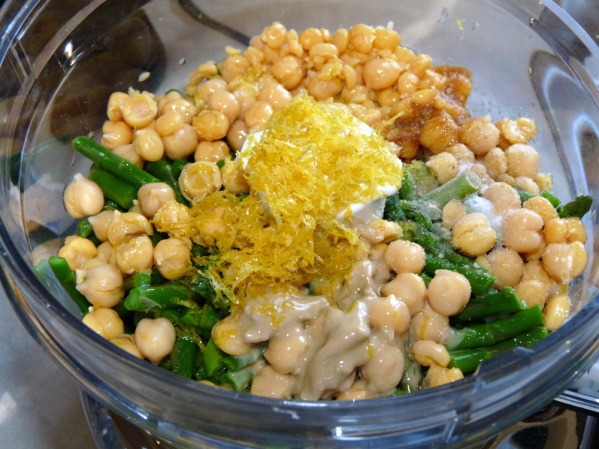 Blend in food processor or blender

I turned on the processor and let it cream the hummus. Several times I stopped it and scraped down the sides. I taste tested and added more salt then pulsed it another minute to mix. I scooped the dip into a container and refrigerated it with a lid for a few hours.

Store covered in the refrigerator

We had the dip as an appetizer before dinner with Ritz crackers. Bad planning, for once those were the only crackers in our cupboard. But the dip was delicious, even on a Ritz. It was a lighter dip with the green asparagus and lemon. I really liked it and think it would also be good as a spread on sandwiches. I’m always looking for a mayo substitute and this would be an excellent spread.

In a food processor, combine chickpeas, garlic, and tahini, zest, juice, and asparagus, and process until smooth. With machine running, pour in olive oil and process until well combined. Season with salt and pepper to taste. Serve with spiced pita chips or crackers. 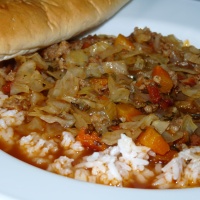