P.S. (Princely Spouse) and I dine out often.  On weekdays when we both work, it’s just easier.  So many of my food copycat ideas come from dishes someone else made me first, and I liked them enough to try to recreate them.  Bacon Double Cheeseburger Hash Brown Soup was one of those dishes.

We were at a locally owned restaurant and the soup was simply called ‘Hash Brown Soup’.  I loved it and previously had done a pretty fair job cloning the soup.  That was several years ago, pre-blogging.  This time P.S. and I both said ‘bacon!’ and so it became a more deluxe burger soup.  I was even going to include the hash browns in the soup, unlike in real life where they’re served on the side.

Not only would it have hash browns, it would have nearly all of the ingredients on a good loaded hamburger: cheese, onions, bacon, pickles, mustard, and tomatoes, all in a creamy broth.  This soup would be a meal in itself.  It was almost a bacon double cheeseburger thrown in the blender with some chicken stock and cream.  Putting it that way sounds disgusting but this soup was definitely delicious! 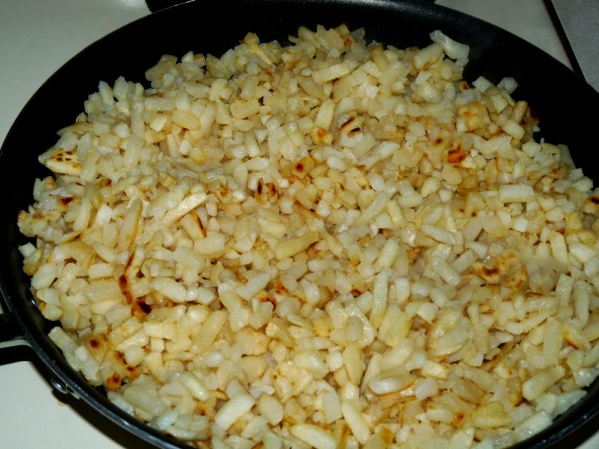 I started by frying a lot of things in batches.  It wasn’t a quick soup but it was a cold rainy day and I wasn’t going anywhere.  I used about 2 ½ pounds of a 4 pound bag of hash browns, putting them into a large nonstick skillet over medium high heat with a little olive oil drizzled in the skillet first.  I fried them about 15-20 minutes, flipping every 3 or 4 minutes, until many of the pieces were browned.  I emptied the skillet into a large soup pot.

Fry bacon until browned and crispy

Next I diced up the package of bacon and put it into the large skillet and fried it until it was brown and crispy.  I like to make it really brown so when it’s put into the stock it doesn’t get all pale and limp and wiggly.  That is just bad baconing!  When it was crispy I put it into the soup pot and let it set.  It took about 20 minutes to fry the bacon to my crispy standard.

I left a little of the bacon grease behind and fried a pound of lean ground beef quite awhile on the first side, until it was browned and nicely caramelized.  With ground beef, the flavor is definitely in the brown.  The depth of flavor is so much better than when it’s still grey and boring.  When it was browned on one side I mashed and cut it into small pieces with my spatula, finished frying the second sides until no pink was visible, then added it to the soup pot.  I didn’t time it, but it was maybe about 20 minutes on medium heat.

Fry onions just until they begin to turn translucent

One last frying binge was the onions.  I’d diced them and added them to the bit of grease left behind by the bacon and ground beef.  I fried them for a few minutes, just until I saw them about to turn translucent.  My goal was to have a little crunch left, as the onion slices on a burger would be.  Then I added them to my soup pot as well. 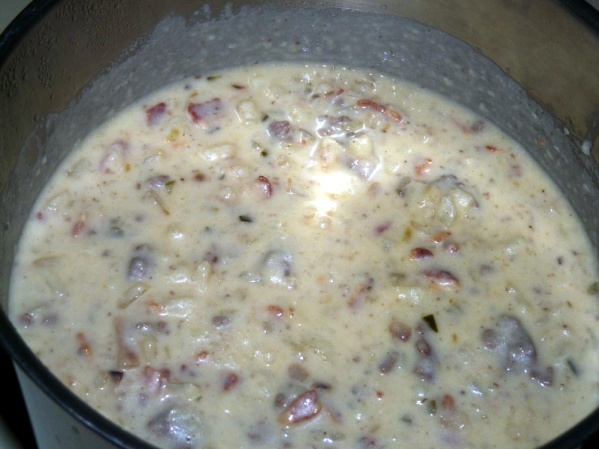 I had my main ingredients all fried and was ready to turn them into soup.  I added 6 cups of chicken stock and brought the soup pot to a boil.  It thickened fairly fast and I added 2 more cups of stock to thin it a bit.  I added ½ cup of sweet pickle relish, a tablespoon of Dijon mustard, and ½ cup of diced tomato to the pot and stirred it all.

The potatoes were falling apart fast and thickening the soup in an almost chowder kind of way that I liked.  But I wanted some hash browns that were firmer for texture.  I added another pound of hash browns to the soup and turned the heat to medium low for the soup to meld and the new hash browns to cook through, about 5 minutes.  When they were steaming I added two cups of heavy cream to the pot, then stirred in 3 cups of shredded Colby jack cheese.  I tasted for seasoning and added 1 teaspoon of black pepper.  It wasn’t necessary to add any salt to the recipe; there was enough salt from the bacon and other ingredients.

I served the bowls of soup with garnishes of more diced tomato, finely sliced lettuce and shredded cheese.  To look pretty, you know.  It’s optional. 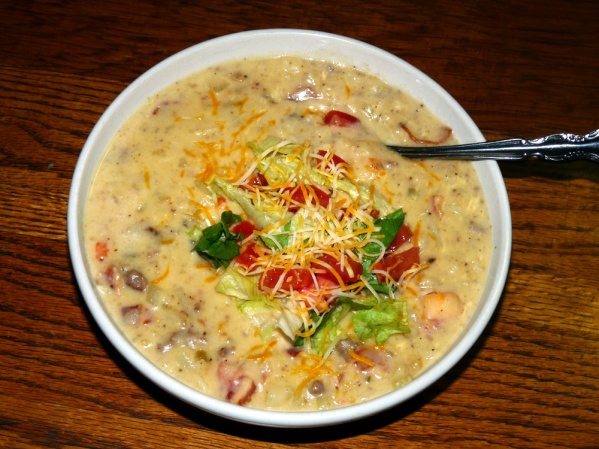 Wow, this soup was hearty besides being to-die-for delicious!  P.S. sliced himself some sourdough bread for dipping because he eats heavier meals than I do.  I was content to spoon and slurp my way through the soup on its own.  I joked that I ate my burger bun-less.

But really, all of the flavors came through very well.  At times you got a taste of pickle, or tomato, or bacon.  The Dijon mustard, although a small amount, gave the soup that little snap of flavor that reminded you of eating a bacon cheeseburger. 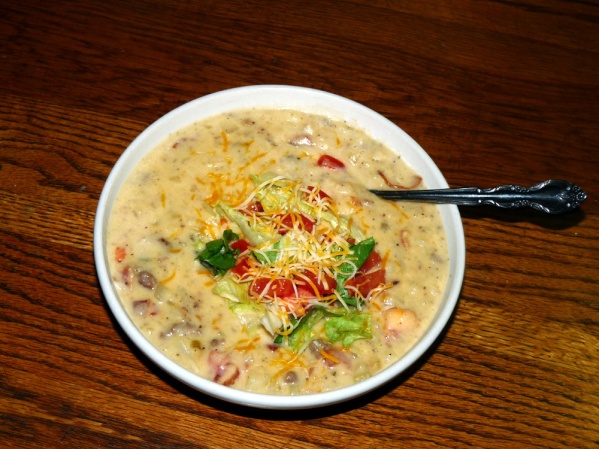 The pot was pretty large, making about 10 servings.  I had so much leftover that when birthday party plans for my Mother for last weekend had to be changed, I volunteered to bring soup for lunch.  We had designer cheese Panini along with our soup, and we were happily full.  I won’t mention the super fantastic dessert bar we had later.

My entry for that dessert bar will be another post.  My mother’s birthday is always a day or two around mother’s day, so we were celebrating two events.  Honestly, we celebrate with a dessert bar for every occasion, double or not.  We’re just like that.  It’s probably a good thing we don’t get together every month.

Sauté hash browns in large skillet with a little oil until they are cooked through and browned in places, 15-20 minutes.  Add to a large soup pot

Fry diced bacon in same skillet until brown and crispy, about 20 minutes.  Add to soup pot.

Fry ground beef in bacon fat until browned and caramelized on one side, about 10 minutes.  Add to soup pot.

Add 8 cups chicken or beef broth to soup pot and bring to a boil.

Sauté onions for a few minutes, just until they are beginning to be translucent.  You want some crunch left in them to imitate the raw onion on a hamburger.  Add to soup pot.

Stir in cream, then cheese and simmer until cheese is melted.  Taste test for salt or pepper.

Serve hot with lettuce and tomato garnish if desired.