My P.S. (Princely Spouse) is the corned beef fanatic in our household.  I leave it to his small slice of Irish heritage to make and eat his yearly fill of corned beef, usually around St Patrick’s day.  This year I wanted to make a creamy corned beef stew, so I said I’d make the corned beef.  Thus began my search for two recipes.

Right after I announced that I would make the corned beef, my P.S. appeared at my side with two bottles of beer in hand.  “Use these,” he insisted.  Rolling my eyes (also not a beer fan) I put “insanely drunken corned beef” into my Google search engine.  Ok, I actually put “corned beef beer” in and found there were hundreds, maybe thousands, of people who also fed beer to underage corned beefs via the crockpot.  Silly people. 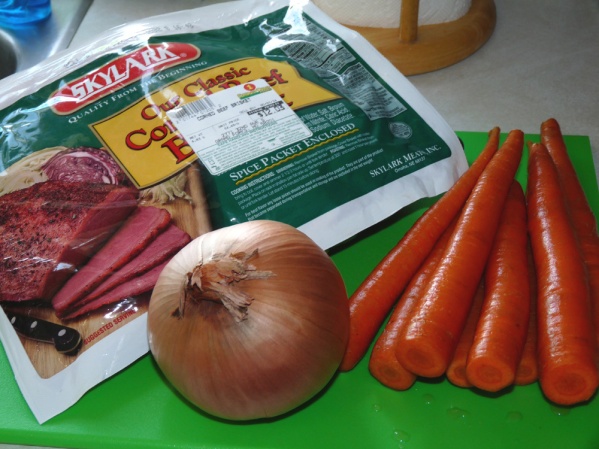 The only drawback I could see was the 8 hour cooking period.  I was doing this over the weekend and I like to sleep in on my days off.  I wasn’t getting up early to give a slab of pink meat a bunch of beer!  My solution was to rise as usual, I’m not telling when, and assemble it in the crockpot.  It would be done when it was done, and I’d put it in the fridge for sandwiches the next day.  No sleep should be lost. 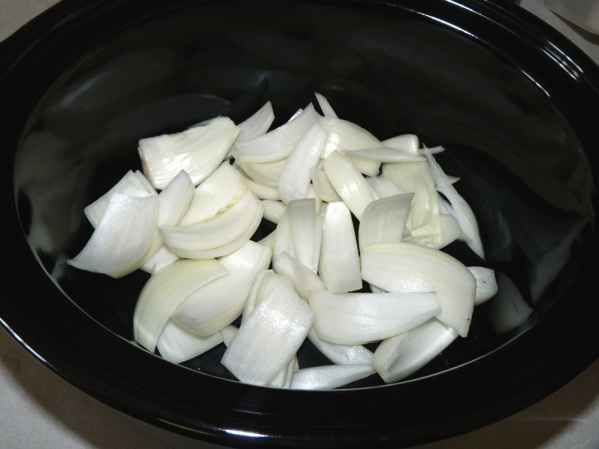 Layer onions on bottom of crockpot

And that’s what I did.  I got the crockpot filled with the onion wedges, followed by the carrots, then the meat.  I put the seasoning packet on top along with the extra peppercorns.

Finally I poured the beers into the crockpot.  It was just the right amount; the meat was partially in the beer and able to drink deeply.

I set the crockpot for low, set the timer for 8 hours, and let it do its thing.  I smelled it all day long.  I’m not sure if it was the corned beef or the beer or both that was stronger.  Suffice to say after 8 hours I was really tired of the smell. 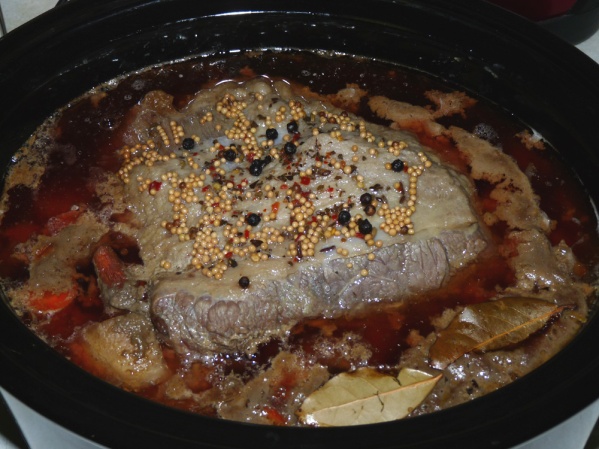 Cover and cook 8 hours on low

It did look corned and cheerfully drunk after 8 hours.  I put it on a plate to cool for 30 minutes, then in a covered container and refrigerated it overnight.  I also put the veggies into another container and the broth in yet another.  I wasn’t sure if they were usable, I’d Google that in the morning.  Done.

Cool corned beef on counter about 30 minutes, then put in covered container and refrigerate if not serving immediately

The next morning I found opinions varied widely on whether the broth should be used or not.  I decided it could be an interesting base for making chili or a beef soup, so I left it in the fridge.  Depending on what I make, the onions and carrots could be used as well.  When I decide how to use them I will mostly likely do another blog on it, if it is edible.  I might also do a blog if it is inedible, so you don’t ever try that.  I like to be helpful. 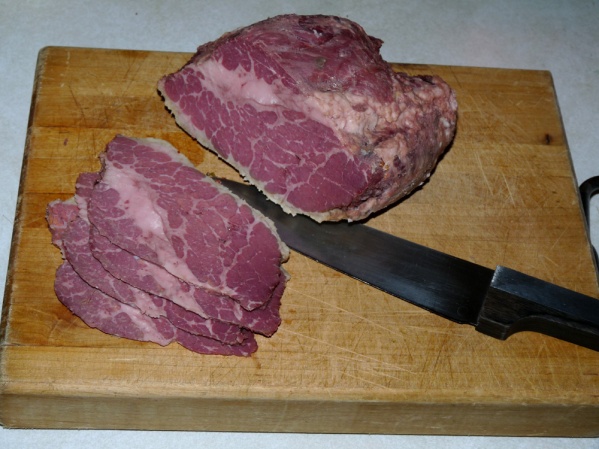 I made corned beef and sauerkraut paninis for my P.S. that evening for dinner, along with a new cucumber tomato cumin salad.  My P.S. was thrilled and did say it was the best corned beef ever.  Or something like that.  He was very pleased.

I, having smelled it way too much, decided not to eat it.  I’m saving myself for the creamy chowder later this week.  And whatever I end up making with the veggies and broth cooked along with the beef.

Corned beef paninis. The back ones are smoked turkey for me.

In a crockpot place the onion wedges over the bottom.  Lay the carrots over the onions.  Place the beef on top.  Brush with the seasoning packet and extra peppercorns.

Pour the beer down the sides, adding water if necessary so that the beef is halfway submerged.

Cover the crockpot with a lid and cook for 8 hours on low.

Remove meat and let cool at room temp for 30 minutes.  Serve or refrigerate.

Corned beef is great sliced and served with sauerkraut and Swiss cheese on rye bread.

Adapted from Fed and Fit.