I hadn’t made sloppy joes for many, many years, and even back then we weren’t huge fans. Recently I bought buns that I thought would work great cut from the top and stuffed with something good and messy. I thawed extra lean ground beef to make an adult version of the traditional sloppy joe. Maybe one with a glug of bourbon? Woot woot!

We had a Sloppy Joe Day (Wednesdays, if I remember right) back in the elementary school I attended through fourth grade.  They were very simple sloppy joes and I loved them.  For whatever reason, the other kids chose to hate them and waste them.  I thought they were silly.  My Mom never made them for us at home, probably because they were that messy to eat.

My Mom was all about the five of us kids staying clean, especially while eating.  Apparently the lunch ladies didn’t think about how messy we’d get eating sloppy joes in school and the stains we’d wear the rest of the school day.  I don’t remember having messy clothes and I’m sure my Mom would have given me a lecture if I had.  I probably ate them neatly like a good girl should.

So sloppy joes have been stuck in my mind as child’s food as I hadn’t had them since I grew up.  It would be fun to revisit a childhood treat with bourbon bottle in hand.  Giving them an adult update might be fun.  Of course you wouldn’t want to try this if you have children in the household.  Everyone in my house is of legal drinking age, so we throw booze in all kinds of foods.  Kidding.  Mostly.

On to the recipe.  I started out by browning the beef in a nonstick skillet over medium high heat to brown one side well, then break it up into smaller pieces. 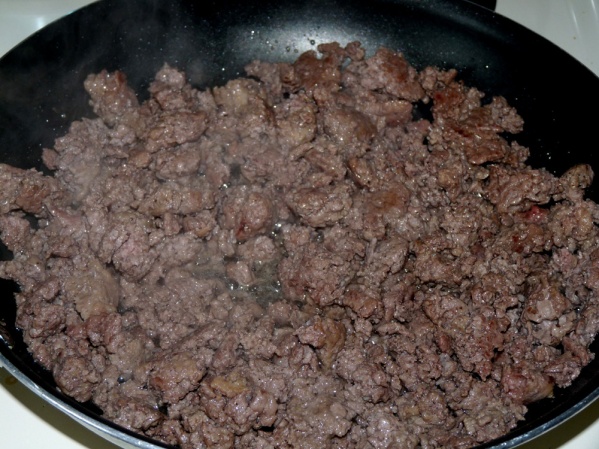 Brown the beef in a skillet until it begins to caramelize

At the same time I cut a large onion in half then cut it into thin slices. I put it into a smaller nonstick skillet with a little oil. 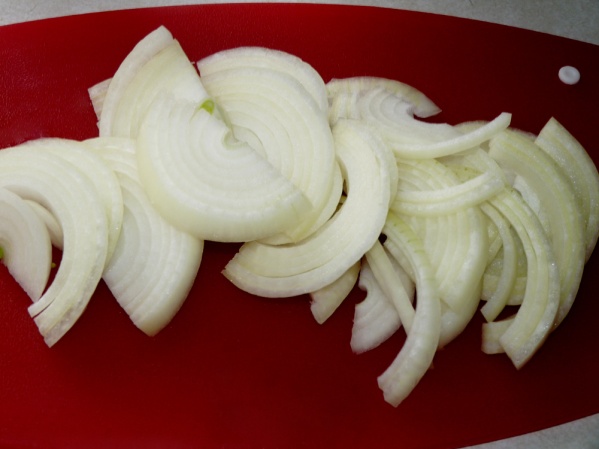 Cut an onion in half, then in thin slices

I let it fry for about 30 minutes, stirring occasionally, until it was beautifully browned and caramelized.  I was imagining a pile of delicious caramelized onions on top of my sloppy joe.

Simmer on low heat until caramelized, about 30 minutes

When the beef was fried I added a small can of tomato paste, 2 teaspoons of beef bouillon paste, 1 ½ cups water, some garlic powder, onion powder, salt and pepper and a shot of bourbon. I stirred it well and let it come to a bubble, then turned it down to medium low heat. I let it simmer while the onions caramelized. 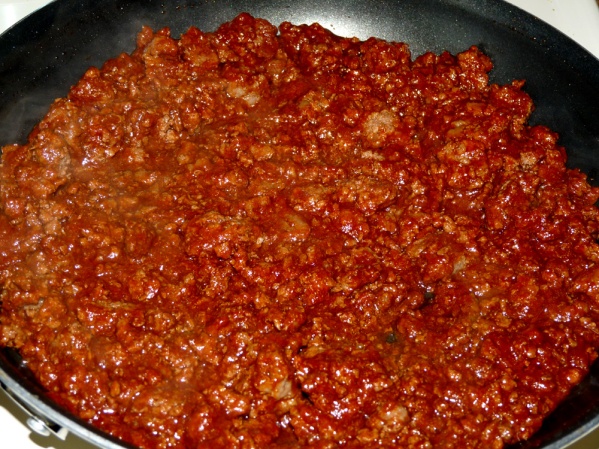 Add the tomato paste, water and seasonings and let simmer

I used a knife to cut slits around the top of the buns and hollowed them out a bit.

Hollow out the buns

I folded slices of provolone in half and tucked them into each bun.

When the onions were done, I spooned the meat into each bun, pressing to fill them well.

Fill the buns with the meat mixture

I spooned caramelized onions on top of each bun.

Spoon onions into the buns

I topped the buns with another half slice of provolone and slid them under the broiler for a couple of minutes to melt and brown the cheese slightly.  The creamy melted cheese would be reminiscent of the Philly cheesesteak stews we’d had a few months back..

We had the sloppy joes for dinner with fresh lemon pasta salad, and they were excellent. The hint of bourbon added a richness to the tomato flavor that was purely adult. The sweetness of the caramelized onions was perfect and another more adult touch.  I certainly didn’t appreciate onions as a kid. 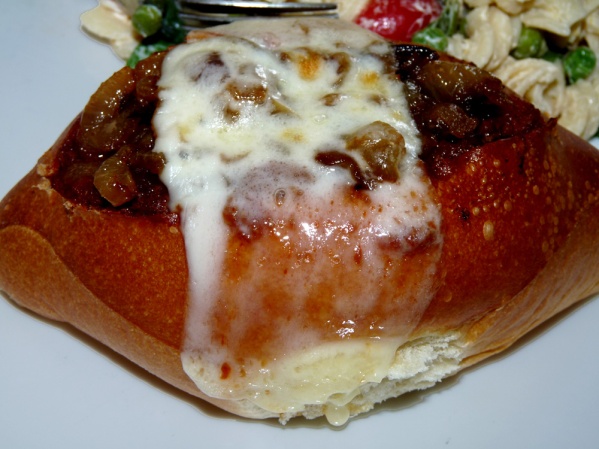 Top with another slice of cheese and broil until melted

The buns were easy to eat and didn’t get soggy and drip since I’d put the cheese on the bottom to keep the bottom fairly dry. They still dripped out the end we were eating off, but not nearly as much as sloppy joes are bound to do. This really was a less messy alternative to a regular cut bun.

It was so good we were looking forward to leftovers the next day. We repeated the whole process and they were even better the second night. I was sorry that there were no leftovers the third night. I will definitely have to make these again!

In a large nonstick skillet on medium high heat, brown the ground beef until it is caramelized brown in places. Break into smaller pieces and turn down to medium low.

In a smaller nonstick skillet heat a drizzle of oil over medium high heat and add the sliced onions and a sprinkle of salt, stirring occasionally. When they begin to brown, turn down to medium low and simmer for 30 minutes, continuing to stir occasionally.

In the meantime using a paring knife, cut a circle around the top of the bun and pull it out, along with some of the insides until it is fairly hollow. Place on a foil covered sheet pan.

Ladle the meat into the buns, pressing down to fill them well.

Ladle some caramelized onions on top of the meat, then cover with another slice of cheese.

Place under the broiler for a few minutes to heat and brown the cheese.