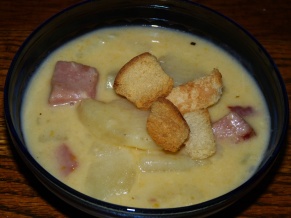 My P.S. (Pork Supplier/hubby) brought home a ham and after a couple of days of ignoring it, he suggested I might make scalloped potatoes for supper that night. I’ve mentioned before how scalloped potatoes and I have agreed to disagree. They refuse to soften for me. I was more in the mood to make soup. I decided scalloped potato soup might be a thing.

Basically it would be potato soup made with sliced potatoes, ham, and cheese. I thought it sounded great. I got the PHE (Patented Husband Eyeroll) from my P.S.. Hm. We would see. I thought this had potential, and was a fitting meal on a cooler evening.  And it would probably turn out better than my scalloped potatoes ever did.

Make ham broth with the ham bone and trimmings

I started by using the ham bone. I put it into a soup pot with water and a few handfuls of the trimmings I’d cut off when I cut the ham off the bone. You know, grizzly bits, fatty bits, the stuff you don’t really want to bite into. I brought the pot to a boil, turned it down to medium low, put a lid on it and let it bubble away for an hour and a half.

I strained the bits out of the ham broth and put the broth back into the pot. It was about 6 cups. I diced a medium-sized onion and added it to the pot along with 2 cups of diced ham. I let the soup cook on medium heat for 30 minutes.

I peeled about 3# of potatoes and sliced them ¼” thick.  They were huge potatoes, so I cut them in fourths the long way before I sliced them.  Sometimes I like to leave the skins on for a rustic look, but this time I didn’t.

I added the sliced potatoes to the pot with some garlic powder, thyme, basil and celery salt. I let them cook for 5 minutes, not wanting them to fall apart and dissolve.  They would cook more as I added the cream, thickening and cheeses.

I stirred 2 cups of heavy cream into the soup, and let it heat again to bubbling, about 3 minutes. I dissolved ¼ cup of cornstarch in ¼ cup cold water and stirred it into the soup until it had thickened..

When the soup had thickened, I added 4 cups of shredded cheddar and a cup of shredded Parmesan. I stirred to make sure it was melted and incorporated then taste tested my soup. I added a little black pepper and it was ready to serve. 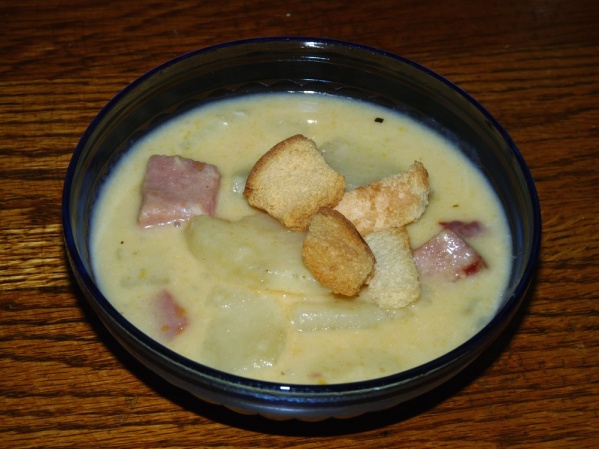 It was truly like eating scalloped potatoes. It had the same flavors but in soup form. With a few toasted bread cubes for texture, it was a flavorful, satisfying meal on an unseasonably chilly night. I have always loved potato soup, but I usually make it with bacon. The ham, along with the cheese, made the soup all the more hearty. It sounds like there is an enormous amount of cheese, but really it wasn’t. You could even add more, if you want the soup even cheesier.

Bring broth to boil, add onions and ham and simmer for 30 minutes.

Add potatoes and seasonings and bring to a boil again; reduce heat to medium and cook for 5 minutes more. The potatoes will fall apart if cooked longer.

Add cream and stir well. Dissolve cornstarch in water and stir into the soup. When the soup has thickened, stir in the cheeses until they are dissolved. Taste test for seasonings, adding salt and pepper to taste.