Look at me, being all brave and using the crockpot again.  I’m always slightly nervous at the idea of letting food cook for so many hours, unseen and untouched by my hands.  Does that might make me a food control freak?  Probably.  I don’t like food cooking by itself; I feel I must be present to help.

I’ve done a few roasts for pulled pork or beef, and some stews, but mostly I do those on days when I’m home and can peek and poke at it occasionally.  This time I was gone all day and it was alone for 7 hours.  Who knows what kind of trouble a roast might get into being alone for that long! 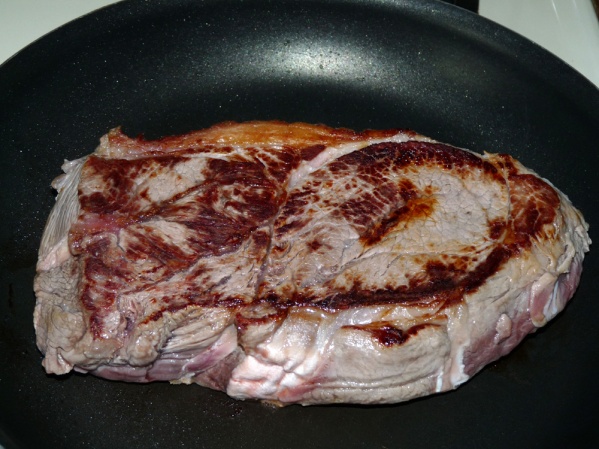 Sear both sides in a skillet preheated to medium high

It was actually my P.S.’s evening to cook but I knew he wouldn’t have time to make a roast that had been in the fridge for4 days already.  I fired up the stove to medium high, heated a large skillet and put the roast into the pan to sear.  I set the timer for 5 minutes and dashed back to put on my makeup.  I needed to be in the office in an hour.

When the timer went off I set it for 3 more minutes since it wasn’t browned and caramelized as much as I would have liked.  This adds so much flavor to the finished roast it’s an important step.  Dashing back to continue getting ready for work, those 3 minutes passed quickly.

The second peek at the roast revealed that it was nicely browned.  I flipped the roast and set the timer for another 5 minutes and rushed back to dress.  After 5 minutes the second side was even more browned than the first and it was perfect.  I was also perfectly coiffed by then and could finish my crockpot prep. 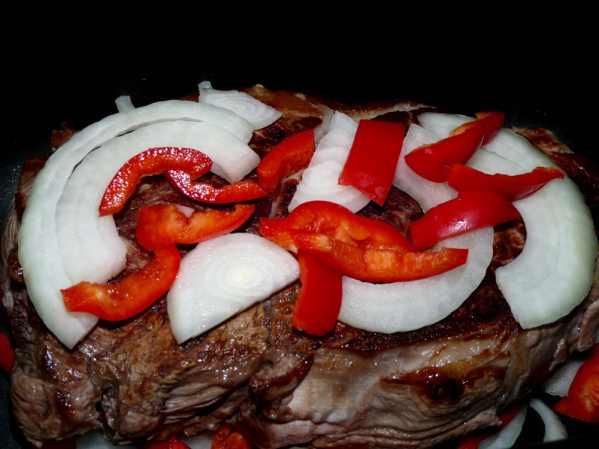 I sliced up a red bell pepper and a medium onion and lay half of the slices on the bottom of the crockpot.  I set the roast on top and laid the rest of the pepper and onion on top of the roast.

I added enough beef broth to the crockpot to bring the level about 1/3 of the way up the side of the roast.  I knew the juices from the roast would add to it and I didn’t want the roast to eventually be swimming in a pool of juices.  Been there, done that.  Several times. 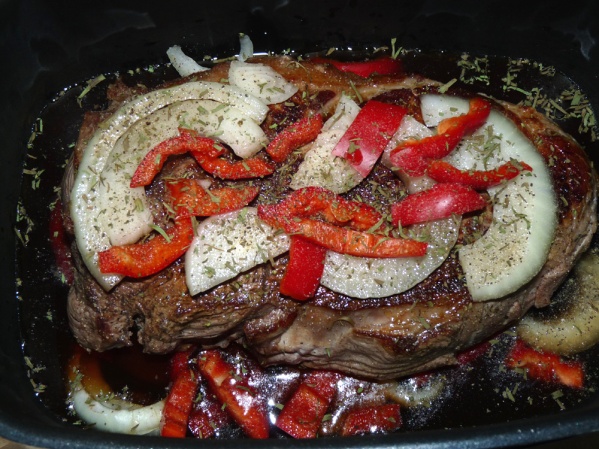 Add broth to 1/3 of the way up the side of the roast, sprinkle with seasonings

I wanted an herb to season my roast and the gravy I would make.  When my eyes found the jar of tarragon I’d dried from the Heritage Garden last summer, I knew it would be a good seasoning.  I used about a teaspoon of tarragon.  My dried herb is a bit stronger than anything I’ve ever purchased.  You might want to judge accordingly.  A good sprinkle of salt, a stronger sprinkling of pepper, and it was ready to cook.  I put the lid on the crockpot that I’d set to high, and let it go.

I walked away from the crockpot and went off to work happy that I’d thought ahead to cook the roast for dinner, but nervous that it might be overcooked or undercooked or… I didn’t know what.  I called my P.S. to tell him the roast would be ready for dinner (hopefully), we had leftover loaded mashed potatoes in the fridge to reheat, and he was responsible for bringing home lettuce to add to the other salad ingredients we already had.  He was pleased.

When I got home that evening the first thing I did was poke the roast to see if it had behaved and cooked.  It did!  It was fall apart tender, the fat had mostly dissolved like a good roast should, and it smelled glorious.

After we made and ate our salads, I used two spatulas to carefully remove the roast to a plate and cut it up for serving.  I laid pieces of roast beef on the plate, topped the beef with a few of the roasted peppers and onions, put a drizzle of juice over it.  I’d already reheated and added the side dish of loaded mashed potatoes so dinner was served.

Oh my, it was divine.  And I don’t even like roast beef.  The tarragon gave it an interesting flavor and it was melt in your mouth tender and moist.  My P.S. was happy with the flavors as well.  I was impressed that it had cooked on its own all day so that eating the roast almost felt like someone else had made it.

I think I was happiest that I hadn’t had to smell it all day.  For me, the problem with beef is the smell.  Yeah I’m just weird that way, I have  no explanation of why I dislike it.  But this roast beef smelled as wonderful as it tasted.  We had leftover roast and the juice that I used to make hot roast beef sandwiches a few days later.  I’ll post that soon.

In a skillet on medium high heat, sear the roast on both sides until browned and caramelized.

Lay half of the red pepper and onion slices on the bottom of the crockpot.  Place roast over them, and cover with the rest of the peppers and onions.

Pour beef broth into crockpot until it comes about 1/3 of the way up the side of the roast.  Sprinkle with salt and pepper and teaspoon of tarragon.  Cover with lid, set the heat on high* and set timer for 7 hours.

Serve with the onions and peppers and a drizzle of juices.

For more of a gravy, use a slurry made of cornstarch dissolved in water and stir until the gravy thickens.  Cook for 5-10 minutes more to cook out the starchy flavor.  Serve over meat, potatoes, or sandwiches.

*my slow cooker isn’t very hot, so I have to set it on high.  Your crockpot or slow cooker may need to be set on a lower temperature or cooked for a shorter period of time.