I have always wanted to make Tikka Masala but just never looked up the ingredients to make sure I had everything.  I knew it was a traditional British dish that sounded Indian.  I saw the recipe on one of my favorite blogs and had to finally make it.  She described the dish as a ‘tikka masala-style curry”.  And we do love curry!

The recipe is a faster version that the usual recipe where the chicken is marinated in yogurt for hours and hours.  I could make it in 20 minutes and have a fabulously tasty supper to impress my P.S.  He is a huge fan of Indian dishes with lots of spices.  He’s been known to eat green curry dishes where beads of sweat popped out all over his forehead.  Silly man.

I pulled a bag of boneless, skinless chicken breasts out of the freezer to thaw for my protein.  Becca used Quorn as her protein because she’s a vegetarian.  We’re chickenarians.  Heh

I chopped the chicken into large chunks, and diced the onions a bit smaller.  I sautéed them both in a large skillet over medium high heat with a little oil.  The chicken had an amazing amount of juices and I had a hard time getting a good sear on the pieces.  I turned the heat to high briefly to cook off the liquid but it just kept rolling out.  I decided my chicken was going to get tough if I kept messing with it so I turned the heat to medium and added the spices. 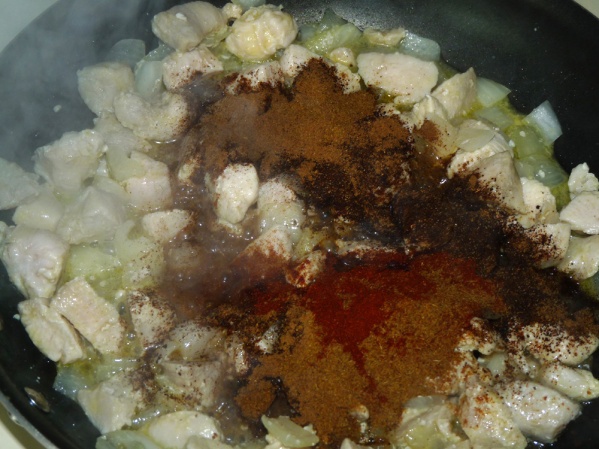 Eek, the spices soaked up the liquid immediately, which was a good thing I guess.  Next time I won’t panic that the chicken and onions are too wet.  Spices will mop up that stuff!  I stirred and cooked it for several minutes, loving the aroma that was filling my house.  My P.S. was going to walk in the door and howl delightedly.  Ok he doesn’t do that but he will head straight for the kitchen to sniff the pot closer.

Sauté the spices for a couple of minutes

When the bottom of the pan was getting dry and wanting to burn, I added the diced tomatoes.  I had to look up the conversion from 400 grams and found it was about 15 ounces.  I was doubling the recipe so I used a 28 ounce can of tomatoes.

Stir in tomatoes and simmer

I let the pan simmer for 10 minutes.  It had started to thicken nicely.  I removed the pan from the heat and stirred in the cream and some salt and pepper.  I taste tested and added a bit more salt.  Perfect!

I served the tikka masala over white rice in bowls, sprinkled with some chopped cilantro.  We absolutely loved the flavors.  It was just a touch spicy but very, very good.  We loved it so much we had it again the second night reheated in the microwave.  We were equally pleased.  It may have been even better the second day. 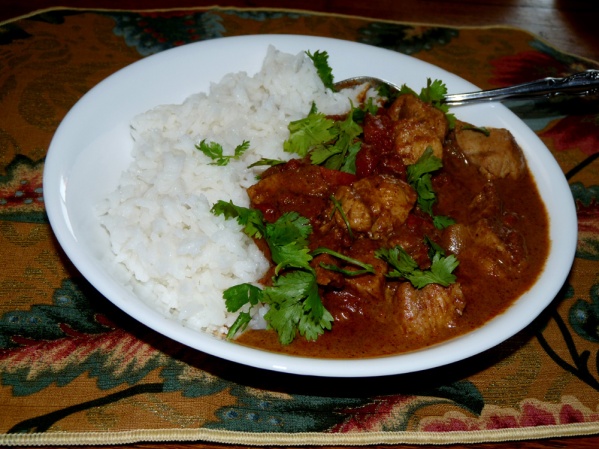 Heat the oil in a large skillet.  Add the onion, garlic and chicken. Cook over medium heat, stirring occasionally, for about 5 minutes, until the onions are soft.

Add the spices, and cook for a further 1-2 minutes, stirring constantly.

Add the tomatoes and cook for 5-10 more minutes, until your chicken is fully cooked, and the sauce has thickened nicely.

Remove from heat and add the cream and seasonings and mix well.

Adapted from Amuse Your Bouche