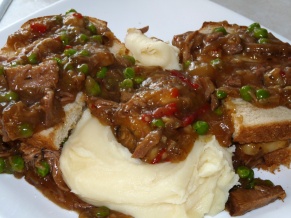 With the success of my recent crockpot tarragon roast beef, I had leftover roast and the juices to use in another dish.  I had already decided that hot roast beef sandwiches needed to happen.  Comfort food.  Mashed potatoes, beef sandwiches, all covered in gravy is my idea of a great dinner.

My P.S. also loves hot roast beef sandwiches.  Recently we traveled through Minnesota to a family reunion and stopped for lunch at a city we like to explore.  We’d found a locally owned candy shop once and that resulted in a wide variety of fudge in amazing flavors.  We at them tiny slices at a time to savor them and enjoy them for about a week!

This time we drove down a main street and found the Main Street Restaurant.  We were excited, we love to eat at local places when we travel; no big chain restaurants for us unless they’re ones we don’t normally see (I’m talking about you, Original Pancake House!)  The restaurant was so typical of a smaller city, complete with a freestanding chalkboard that announced the luncheon specials. 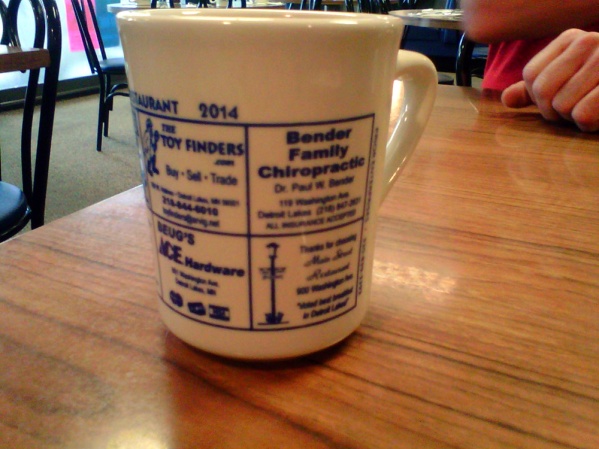 My P.S. pointed to the “Hot Beef Sandwich” special and said he had decided already.  That may be the fastest he’s ever made a choice in a restaurant.  Usually he’s super slow to decide.  He later was amazed at the amount of food that he was served and groaned after he’d eaten every mouthful.  We had great service, good food, and were pleased with our new-found restaurant.  I even took a picture of their coffee mugs that advertised local businesses.  Too cute! 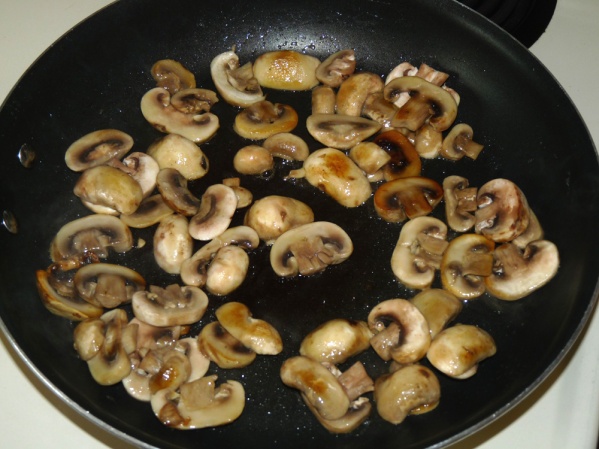 Back  to my recipe.  It’s not really a complicated recipe that needs much explaining.  I had mushrooms and wanted to use them up so I sliced and sautéed them in a little butter and oil in a large nonstick skillet for a few minutes.  I didn’t cook them long; they’d be cooked more as I slowly added the rest of my ingredients. 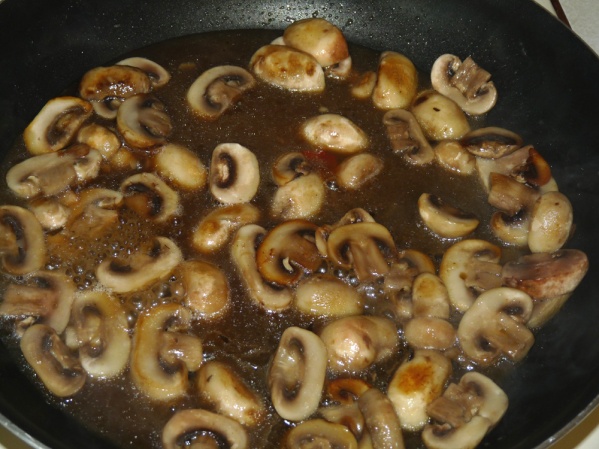 I added the beef juices I’d saved from the crockpot and added them to my skillet.  There was about 3 cups of broth, with onions and red peppers in it that gave it an extra depth of flavor.  I skimmed most of the solidified fat off the top before adding it to the pan.  I let it come to a boil over medium heat. 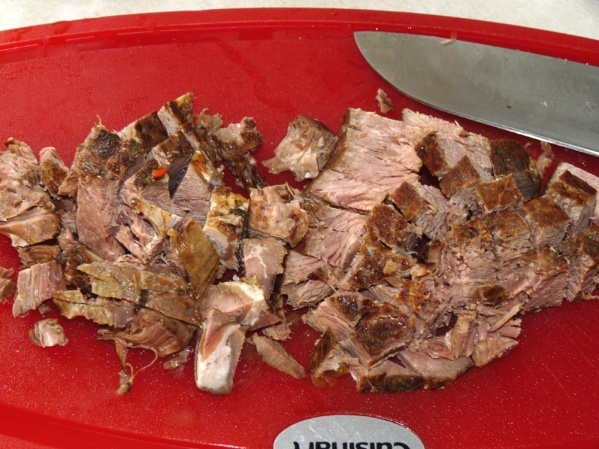 I had diced up the remaining roast beef while I waited for my mushrooms and broth come to a boil.  I also stirred the skillet occasionally to prevent burning. 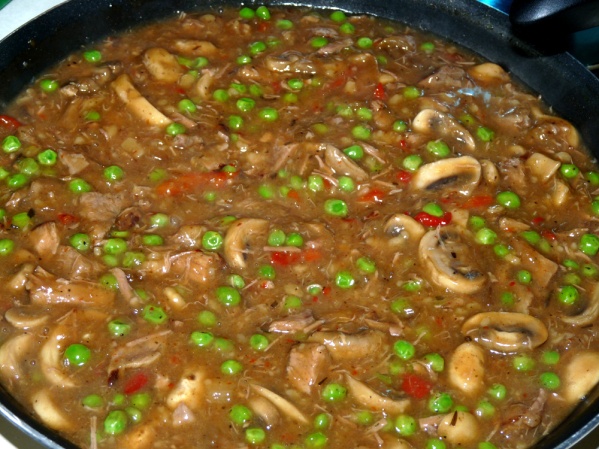 Add beef and peas and bring to a boil

When the broth was bubbling I added the beef and a cup of frozen peas, stirring well, and let it come to a boil again.  I had taste tested it and decided to add a little more minced garlic and a glug of Worcestershire.  Depending on the broth you use for your gravy, you might want to add other seasonings.

I stirred a couple of tablespoons of cornstarch into some cold water to thicken my gravy.  I usually end up doing it twice, because the first one doesn’t thicken it enough.  No problem to add more, it’s better than doing too much the first time and ending up with gravy you can eat with a fork. 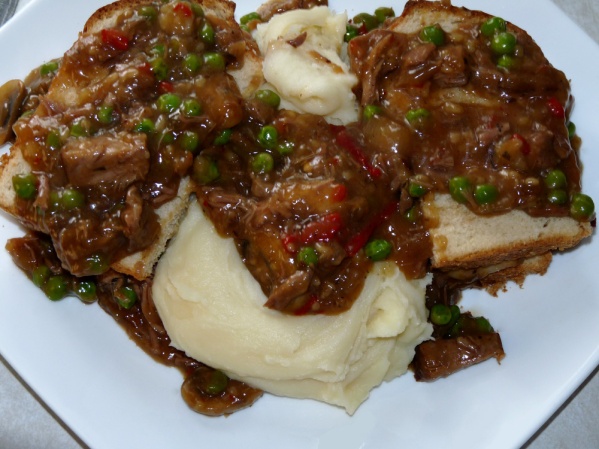 I cheated and made instant mashed potatoes for this meal.  They’re one of my secret favorite foods, but my P.S. is not so much a fan.  Here in an area where growing potatoes is a major business it is crazy to not use the real thing.  Except if you love the taste of instant potatoes once in awhile.  Guilty!

I used whole wheat bread and made sandwiches stuffed full of the roast beef and gravy, then cut them in half.  I spread them open, added a mound of mashed potatoes to the center of the plate and ladled more beefy gravy over the tops.

You can tell by the pictures that this was a very hearty meal.  I was so excited about serving it I totally served too much and couldn’t finish my meal.  I reheated it the next day and had a great lunch.  My P.S. actually ate the whole meal and again was groaning that he’d eaten too much.  I just laughed.  That’s a compliment.

Saute mushrooms in a large skillet heated when the butter and oil.  Stir and sauté for about 4 minutes.

Add beef broth, garlic and Worcestershire and bring to a boil.

Dissolve cornstarch in water and slowly add to skillet as you stir.  Stir and let thicken.  If not thick enough, add another mixture of cornstarch dissolved in water until your mixture is thickened to your preference.

Make 2 sandwiches using half of the beef and gravy mixture.  Cut in half and spread open on the plates.  Add a mound of cooked potatoes and cover potatoes and sandwiches with remaining beef gravy. 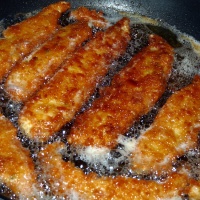