We were having a sisters day, one of those days that involves lunch out and lots of snacks later while watching movies.  Sister Linda was bringing a warm chicken dip to eat with chips, sister Dawn and I were providing the sugary treats.  I wanted to try chocolate stuffed cupcakes one more time, with pistachio pudding in the cake.  It would be a great combination of flavors.

Dawn’s pumpkin bars were super delicious. Topped with cream cheese frosting, they were my favorite snack. My cupcakes were good, but I always like other peoples’ food best, don’t you? I’m always too busy judging my own foods to get the full effect of flavors and textures.

Put cake ingredients into a bowl and beat for 2 minutes

I almost have this cupcake recipe memorized, having made it three times now.  I put the cake ingredients into the bowl and beat well, then scooped the batter into the cupcake papers.

I had a dozen of the cute papers I’d bought awhile back and also used 12 regular white paper liners.  That was the last of my liners and I made a mental note to buy more.  I hadn’t made cupcakes very often in the last decade even, but finding this recipe has run through a whole lot of liners!

I put the cupcakes into the preheated oven, then later realized I hadn’t taken the requisite pre-bake picture for the blog.  I opened the oven and snapped a quick picture.  They looked beautiful and almost done in my immaculately clean oven.  No seriously, I’d recently pressed the button and cleaned the oven.  It is all shiny and ready for the upcoming holidays. 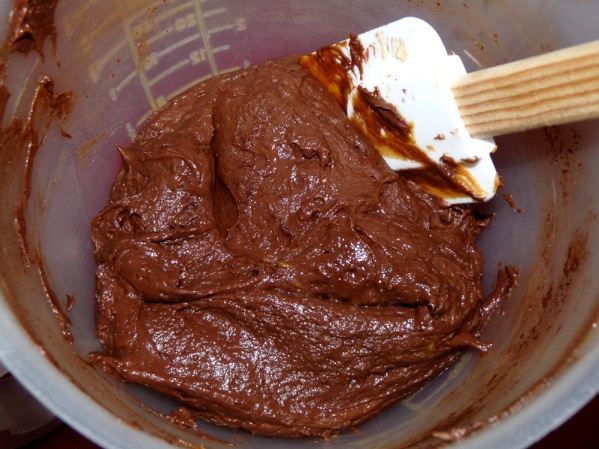 When the toothpick came out dry, I removed the cupcakes and let them cool on a rack.  While I waited, I mixed together the chocolate cheesecake filling and put it into a piping bag.

I used my small cookie scoop to scoop the center out of the cupcakes, making sure not to scoop all the way to the bottom.

Pipe filling into each cupcake leaving 1/2″ at the top

The piping bag or just a plastic zippered bag with a corner cut off is perfect for piping the filling into the cupcakes.  It goes quick, one blob at a time.

Cutting the top off the removed section of the cupcake, I placed them back on the cupcakes as the lid over the filling.  It helps when taking the next step, which is icing the cupcakes with chocolate frosting. I don’t get too fussy with the icing; it gets spread and eaten and doesn’t always need to be fancy.

Cupcakes frosted and pretty, I took my blog pictures and had to sneak a taste.  It was a chocolate cupcake, I felt it my duty to check it out!  And mmm, it was as good a combination as I’d expected.  The pistachio flavor was a strong presence even though it was merely a box of pudding added to a yellow cake mix.  The peanut butter chocolate filling and chocolate frosting only heightened and complimented the pistachio flavor.  I was happy with my new combination of flavors.  The recipe has proved to be quite versatile!

In a mixing bowl, mix together the cake mix and pudding mix with a fork. Add eggs, water, oil and sour cream if used and beat with a mixer for 2 minutes. It will be a very thick mixture.

Pour or scoop batter into cupcake liners. Bake for 15-20 minutes, or until a toothpick inserted in the center comes out dry. Mine took 18 minutes. Set on racks and let cool.

Place ingredients in a large bowl and beat with electric mixer until creamy and smooth. Scoop into a plastic zippered bag or a piping bag. Chill until used.

Scoop a hole about 3/4 of the way down into the center of the cupcake. Set aside to use for lids on the cupcakes before frosting.

Pipe filling into the cupcakes leaving 1/2″ at the top to replace the lid.

Cut 1/2″ off the tops of the removed pieces and replace on each cupcake. Spread frosting over the top and decorate with sprinkles or decorations of choice.