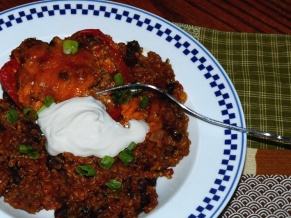 A few years ago I wouldn’t have touched a bell pepper if you’d paid me. I hated the green things.  If a recipe couldn’t do without one, I chopped them super fine so I didn’t notice them as much.  They just tasted too…. green…. to me.  Then I discovered the colored ones: red, orange and yellow peppers rock!  They’re sweeter and I don’t feel like I’m grazing.

I had several colored peppers and decided to use them to hold some flavorful chili. And to be even more interesting I’d add quinoa to the chili.  Everyone says we should eat more quinoa.  I would obey with this dish.

I sautéed the ground beef and onion in a nonstick skillet, making sure the beef was caramelized brown on one side before breaking it into smaller bits.

When I was happy with the beef and onion I added a can of crushed tomatoes, some beef broth and my usual chili seasonings. I stirred it well and let it come to a boil before stirring in the quinoa. 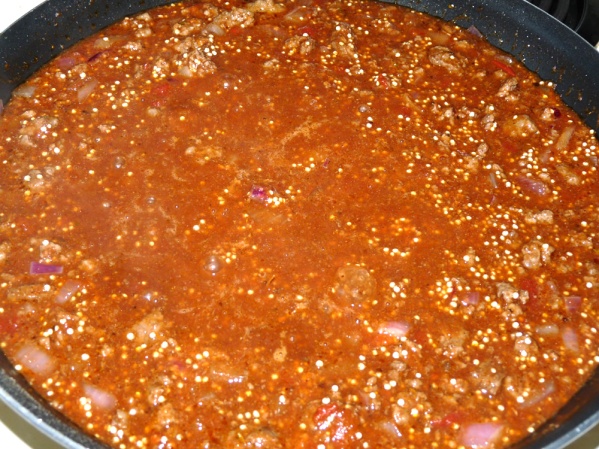 I let the mixture come to a boil the second time then reduced the heat to medium low to let the quinoa simmer and absorb liquid. 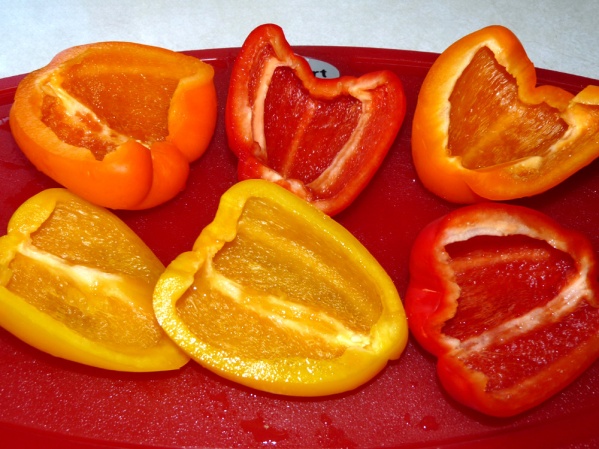 While the chili bubbled away I cleaned the peppers, cutting them in half. I had a pot of water boiling and put the peppers in the water until they were almost fork tender.  Peppers take longer than you’d think to soften and they weren’t going to be baked long enough in the oven for that to happen.  Hence the blanching. 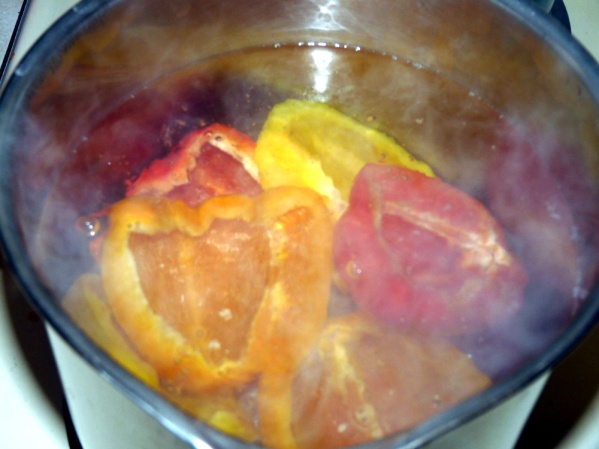 When the chili was done I taste tested for seasoning and added a little more salt. I stirred in the salt and 2 cups of chopped fresh spinach.  I let it simmer a few minutes to wilt.

I thought it would be nice to have a super cheesy chili in the peppers and added 1 1/2 cups to the skillet and stirred well. 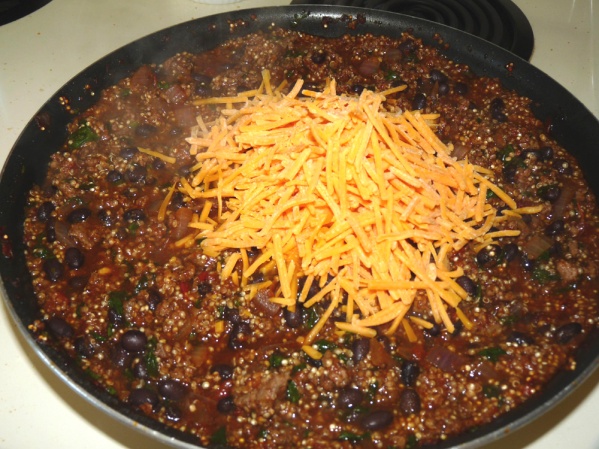 I spread a layer of chili on the bottom of a sprayed baking dish, then laid out the peppers.  I filled each one generously and sprinkle the remaining ½ cup of cheese over each filled pepper.

I baked the dish in the preheated oven for 40 minutes. The cheese was melted and beginning to turn golden brown.

I served the peppers with a few spoonfuls of the chili underneath and topped them with a dollop of sour cream and sprinkle of green onions.

Stuffed peppers had never been so good! The quinoa added an unusual touch- not super flavorful but made the texture interesting.  The sweet peppers were so much better than green ones!  We loved the meal and the leftovers were even better reheated a couple of days later.

Brown beef and onions in a large skillet until the meat is deeply browned.  Add tomatoes, broth and seasonings.

Stir in quinoa and let skillet come to a bubbly boil.  Reduce heat to medium low and simmer for 25 minutes, until quinoa is done.

In the meantime clean peppers and blanch in boiling water for 5 minutes, until they  are fork tender.  Remove from water and cool.

Stir spinach into meat mixture and simmer for 5 more minutes.

Stir in 1 1/2 cups of cheese and fill peppers, placing in a sprayed baking dish.

Pour rest of filling down into the dish and sprinkle top of dish with remaining cheese.