I’m neither Danish nor a pancake lover, but when I saw these round orbs of golden perfection called aebleskiver, I was entranced.  Of course I needed to learn how to make them!  My P.S. (Pancake Snarfer/hubby) is part Danish and I thought he’d also be amused with them.  I bought the special cast iron skillet with wells to hold the batter and went searching for recipes.

Oh my goodness, there were so many variations it made my head spin!  With or without buttermilk, with or without fruit, whole wheat flour or regular white flour, there were so many I was confused.  I thought yes to the buttermilk, as I like those pancakes the best when I do eat pancakes.  And I’m not a whole wheat flour fan so that wouldn’t be happening.  I ended up with a recipe that was a bit complicated but it was the best flavor.

I made aebleskiver many times to test out different recipes.  When I finally found one that didn’t stick and was pleasant tasting, it happened to be the one where you had to whip the egg whites into stiff peaks, then fold them in as the last step.  That sounded all fussy and over my head but really, what’s to whipping egg whites and stirring them in carefully?  It wasn’t really that hard to do.

We made aebleskiver recently during the holidays.  My P.S. actually requested them by reminding me they are usually eaten around Christmas time.  Much like the lefse that is our Norwegian Christmas tradition, the Danes make round pancake balls.  I don’t usually make them for breakfast as they do take a lot of time to make an entire batch.  But once made they can be stored in the fridge and reheated for several mornings.

P.S. whipped the egg whites for me and whisked together the dry ingredients in a bowl.  I whisked the eggs, milk, buttermilk and vanilla, then slowly whisked in the melted butter.

Whisk together eggs, milk, buttermlk and vanilla. Whisk the melted butter in slowly.

I stirred the dry mixture into the wet mixture just until there were no huge lumps. 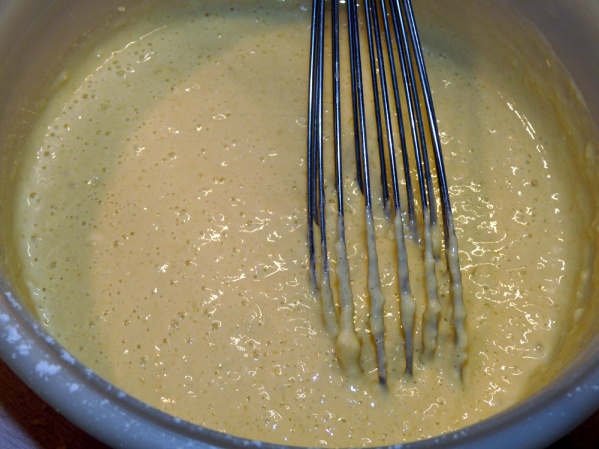 P.S. folded in his egg whites and the batter was ready. 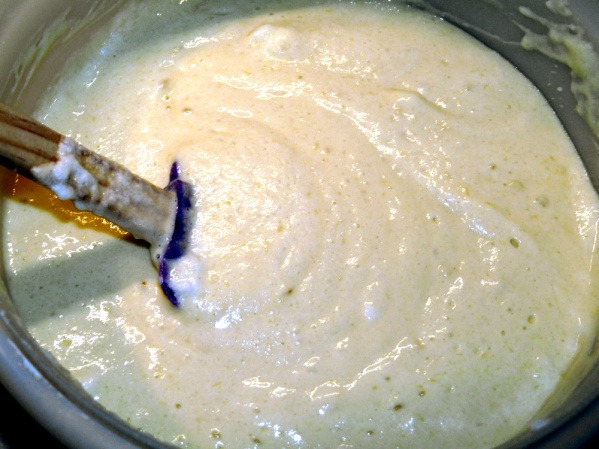 P.S. folded in his egg whites and the batter was ready.

The griddle is heated over medium heat and takes quite a while to be ready, it being cast iron and all.  There were other kinds of nonstick pans or electric versions when I was pan shopping but I chose the old-fashioned cast iron.  I’ve never regretted it.  It cooks and cleans beautifully, much like all cast iron.  But it seriously does need to be fully heated before you begin or you are going to do a lot of scraping and cleaning and starting over.  I’m just sayin’…. 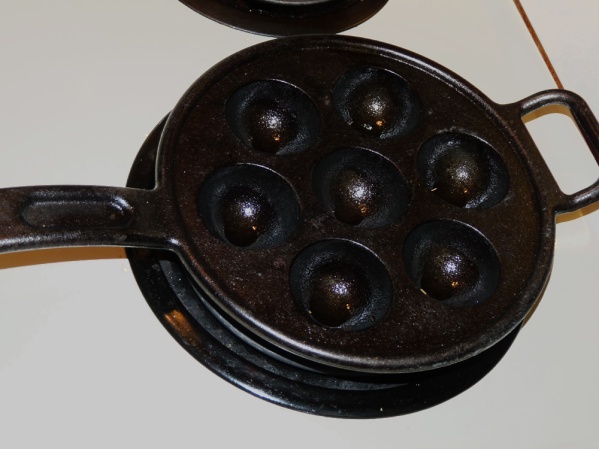 While waiting for the griddle to heat I used a basting brush and brush oil in each pocket.  I brush it with more oil with each round of aebelskiver, to prevent sticking.  I’ve had a rare one stick and it’s not pretty, but with oil each time you’re pretty safe.  I fill the wells just to the top with batter, pouring from a squirt bottle or a mixing pitcher and using a spoon to stop the stream when it is full.  If it’s a little overfilled, no problem.  It will all even out as soon as you start tipping.

Fill wells to the top, trying not to overfill

You’ll know that the griddle is hot enough when the batter makes noise on contact with the griddle.  It bubbles gently for a minute or two, then your work begins.  I use a bamboo skewer, the long ones we use for grilling.  With the pointed end I press it down into the well, pulling up on the left side to turn the ball of batter easily.  It’s hard to describe, but you’ll know the minute you do it correctly.  The ball will turn and you want it a 90 degree angle, up in the air.

Turn all of the aebleskiver in the same fashion and let them sit for a minute or two.  Then you’re going to turn them so they are upside down, and the top of the ball will be completely solid.  Turn them all this way.  You are tipping the balls so that the batter runs all over and fills the outsides until they are solid balls.  The more you practice, the better you will learn where to use the skewer to get them smoothly tipped again.

I then turn the aebleskiver about 45 degrees every minute or so.  It helps them cook through but not get too dark on the outside.  I cook them about 6-8 minutes, turning in many directions to cook evenly. 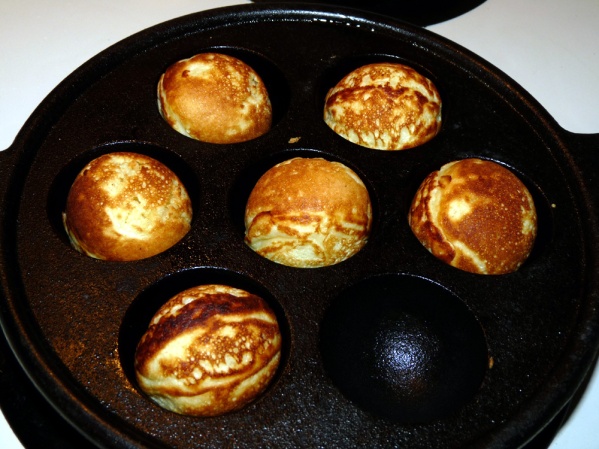 Remove one by poking the skewer into the ball and lifting it to a waiting plate.  Cut it in half to see if it is done.  The insides should be uniformly cooked, but somewhat damp.  The consistency of an aebleskiver is not as dry as pancake; it is more of a wet cake like a popover.  Not runny, but firm.  When they are done, sprinkle with powdered sugar and dip in a fruit jam or compote as you eat, if desired.  I like mine dipped in maple syrup.

The aebleskiver balls are beautiful and round once you get the hang of how to turn them to coat them totally round.  They don’t stay round usually.  They often droop, sag or slightly flatten as they cool.  They are such a light and delicate texture they do easily deflate a bit.  P.S., this being his first time helping or just seeing how they are made for that matter, was interested in the texture achieved.  He commented that he may whip his egg whites separately to make pancakes from now on, he liked the lightness so much.

The recipe makes about 32 aebleskiver.  My griddle makes 8 at a time, so it was 4 rounds of batter to tend to.  From start to finish it was about an hour.  Definitely not a daily event in my household!  They are not so difficult to make but it will take a time or three to be comfortable with the turning of the balls and judging if they are done yet.  I can’t tell you how that feels or looks, aebelskiver are more of a “practice makes perfect” kind of food.  But your family will learn to enjoy them the rare times you make them!

Beat egg whites until stiff but not dry, and set aside.

In a small bowl, whisk together the egg yolks, buttermilk, milk and vanilla.  Very slowly whisk in the melted butter.

In another bowl, whisk together the flour, baking powder, salt and sugar. Combine the yolk mixture into the flour mixture and whisk until  well blended. The batter will be a little lumpy.

Using a rubber spatula,  gently fold in the egg whites in two additions.

Cook about 3 minutes or until slightly bubbly around the edges, Quickly tilt each aebleskiver over halfway, using a long wooden  skewer or toothpick.  Turn again halfway from the side, let brown, then another time upside down.

Continue cooking and turning until golden all the way around, about 2 minutes more.

Transfer to a plate and repeat the process with the remaining batter, brushing cavity with oil each time.

Dust with powdered sugar and serve immediately.  May be served with preserves or syrup.

Can be stored for several days in the fridge and reheated.