Our daughter Emily suggested we dine at an Irish pub when we were in the Big City recently.  I’ve forgotten what she and my P.S. ordered but my Irish Meatloaf laid on a crispy bed of delicate onion rings, a side of mashed potatoes and all drizzled with a cabbage cream sauce was unforgettably delicious.  The cream sauce was so good I wanted a large bowl and a spoon!

Returning home I searched for recipes online until I found ones that sounded like it would have similar flavors.  Although the cabbage cream sauce was slightly different, its flavors were delicious.  I was so thrilled with the flavors of the dish I made it twice before blogging.  I made a few minor tweaks and by the second time it became one of my new favorite dishes.  I predict I’ll make this often.

Lightly brown garlic in a drizzle of oil for a minute

In a large skillet I heated a drizzle of oil and spooned in some minced garlic.  I browned it for a minute or so, taking care not to let it get dark as garlic gets bitter when browned.  I added the finely chopped cabbage and let it sauté until it was translucent, about 15 – 20 minutes.  I just eyeballed it and didn’t time it exactly. 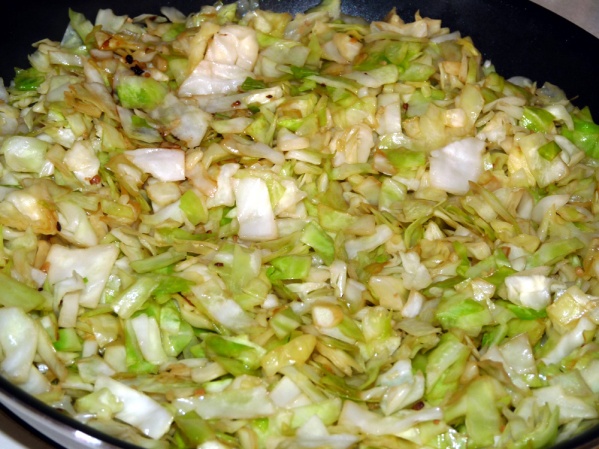 Sauté cabbage until translucent, about 15-20 minutes

When the cabbage was translucent I measured in the sherry.  I let it cook down until most of the liquid had disappeared, about 10 minutes at medium high heat.

I added the cream and when it came to a good bubble I turned the heat to just below medium and let it simmer for another 15 – 20 minutes to reduce the liquid in half.  It reduced down and thickened like a gravy.

Add cream and reduce down to half

The first time I made the cream sauce it took almost 2 hours to reduce down at low as the recipe directed.  The recipe was larger and had twice the amount of liquid so it took that much longer to reduce down each time.  I was frustrated, not having planned the timing right.  My meatloaf and potatoes sat warming in the oven for an hour on low and got a bit dry since the sauce was taking so long.  I’d have planned differently had I known.

The second time I made the cabbage cream sauce I cut the sauce recipe in half and it only took an hour to make.  That would be much more manageable time-wise to get the meatloaf and potatoes done at the same time!  But I went a step further and made the cabbage sauce hours in advance, refrigerated it and heated it in the skillet later when the meatloaf and potatoes were done.  I had guests and didn’t want to be tied up making food for an hour instead of visiting. 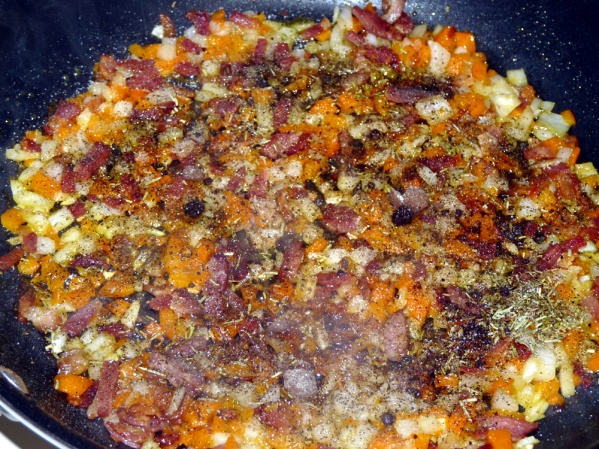 Sauté bacon until almost browned; add peppers and onion and continue sautéing until the onions are translucent

The meatloaf is a fairly simple recipe once the bacon. onions and peppers are sautéed and added to the rest of the ingredients.

Pat meatloaf into pan making sure not to pat it too solidly.

I also made the meatloaf ahead of time the second time around when I had guests.  Slipped into the oven and baked for an hour, it was an easy fix while entertaining.  I have to admit I lost the site where I found the meatloaf recipe but it is so heavily adapted that might be ok. 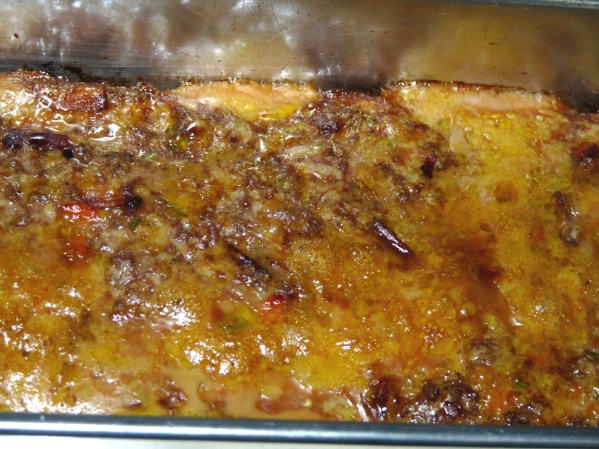 Bake meatloaf for an hour

I had even peeled and cut the potatoes into chunks and had them waiting in salted water.  I turned the heat on and let them cook until they were fork tender, then mashed them with some butter and milk, adding salt to taste. 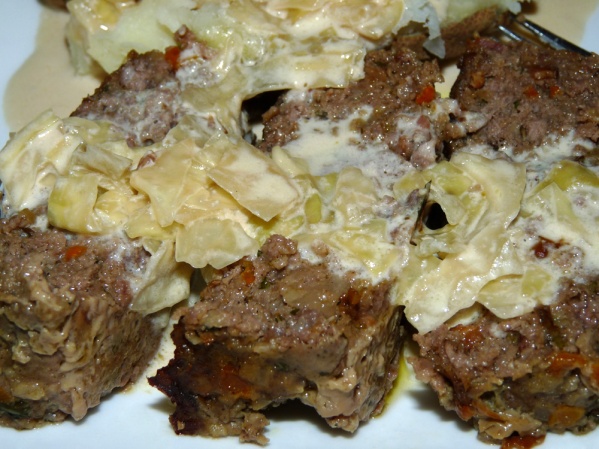 I served the Irish meatloaf, mashed potatoes and cabbage cream sauce with green beans I sautéed a few minutes in minced garlic and butter.  The meal was as delicious and exciting as the first time around and everyone was super happy with the new foods.  Heated in the microwave, the leftovers were equally tasty!

Sauté bacon in a skillet over medium high heat until it is almost browned and crispy, about 5 minutes.  Add onion, sweet bell pepper and seasonings and sauté another 3 minutes or until the onion is translucent.  Cool contents of skillet.

In a large bowl mix all ingredients just until mixed.  Do not over mix, we don’t want a dense rock.

Place meat into a loaf pan or form gently into a loaf shape with your hands.  Place in oven and roast for 1 hour.

Serve warm on a bed of crisped onions and covered with cabbage cream sauce and a side of mashed potatoes.

In a large skillet add the oil and sauté the garlic over medium heat for about a minute until very lightly browned.  Browned garlic can be bitter.  Add cabbage and sauté until translucent, 15 – 20 minutes.

Deglaze the pot with sherry and simmer over medium high heat until the liquid has reduced down and doesn’t appear on the bottom of the skillet any more, about 10 – 15 minutes

Add the heavy cream and reduce heat to medium, simmering until reduced by half.

Add butter and salt and pepper to taste.  Simmer until butter is melted, stirring occasionally.

Recipe for cabbage cream sauce adapted from the Food Network