Home » Appetizer » Bacon Jam {on a crostini with goat cheese}

The idea of bacon jam intrigued me.  I’m into bacon as much as any other bacon addict, but adding it to jam seemed confusing.  I needed to try out a recipe to see if this could be a thing for me.  Although it looked a tiny bit complicated with the cooking and reducing for a long period of time, the ingredients were simple.  And I had them all on hand.

My sister Linda was coming to stay for a few days then we were traveling to our other sister’s city for her son’s graduation.  Linda and I were going to binge watch the new Netflix original series, Grace and Frankie.  I’m not paid to promote it but I strongly urge you to check it out!  It was the most hilarious show!  There were 13 episodes and we laughed and laughed.  It’s rare to find a show that is about older adults and is humorous in ways only older adults can appreciate.  Although they’re a good 20 years older than us, we could identify with some of the common themes of aging.  We can’t wait for season 2!

So with plans to watch TV for a day or two with my sister, I made some snack foods just in case we needed to keep up our energy while we melted into the couches.  I made our favorite krab salad to be eaten on crackers,  I baked chocolate chip peanut butter cookies.  I made a chocolate tart and cut it into wedges.  I wanted one more salty snack, possibly with cheese.  Bacon jam with goat cheese on crispy slices of baguette sounded perfect to round our snacks out. 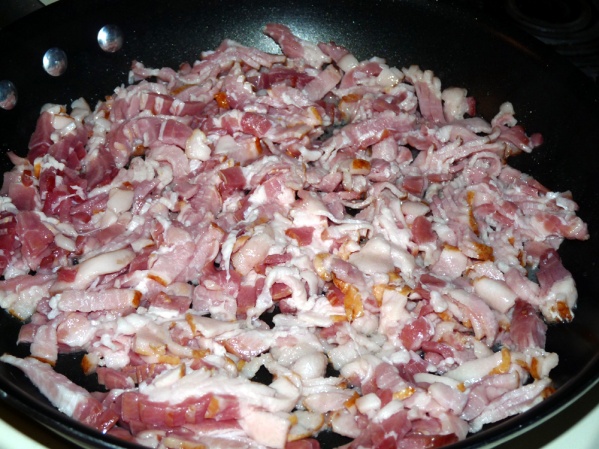 Dice bacon into small pieces and fry in a nonstick skillet over medium high heat until almost browned.

I made the jam two days earlier, to make sure it turned out well and was something we’d want to eat.  I fried up the bacon until it was mostly crispy and browned, then spooned off all but one tablespoon (I eyeballed it) of the grease.

Drain off all but one tablespoon of bacon grease and stir in apples and onions.

Leaving the bacon in the pan, I added the rest of the ingredients.  I’d wondered at not peeling the apple before dicing but it turned out fine with the peelings left on.  The peelings were so softened after the long period of cooking they weren’t even noticeable.  I stirred well and turned the heat down to low and put a lid on the skillet.  I set the timer for 20 minutes and didn’t touch it, as directed.

I covered a splatter screen with foil to make a lid for my largest nonstick skillet, not having a lid for that skillet

After 20 minutes I uncovered the skillet and thought it should have been a bit more advanced in cooking.  The onion wasn’t very done even, and I think my choice of “low” on my stove was wrong.  I’ve always thought my “low” setting was too low and use medium low instead when I’m simmering things like long grain rice.  I dialed the heat up to the medium low setting, replaced the lid on the skillet and let it cook for another 20 minutes. 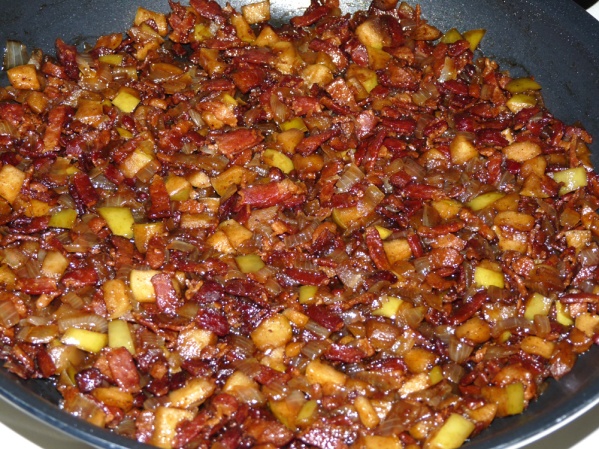 On its way to being caramelized goodness

Much better!  The onion was soft and browning after 20 minutes on medium low.  But this is my stove and its quirks; you’ll want to use your own judgment for your stove’s heat settings.   I stirred the jam mixture well and replaced the lid on halfway so the jam could begin to reduce down and thicken.

I stirred the jam every 5 or 10 minutes to redistribute the remaining liquid and it maybe cooked about 20 – 30 more minutes before it was thick and jam-like.  This will vary depending on your heat of course.  When I was sure it was the right texture, I set it off the heat and let it cool to room temp.  I stored the jam in a plastic covered container as I wasn’t serving it separately when we snacked.

Two days later I let it sit for a few minutes to warm and let the bacon grease melt back into the jam.  I had cut thin slices of baguette and toasted them, turning once, in the oven until they were crisped and lightly browned.  I spread the jam on the baguette slices, then crumbled goat cheese on top.  I totally forgot the parsley sprigs, washed and ready in a bag in one of the vegetable drawers of the fridge.  Oh well.

Spread jam on crostini then sprinkle with crumbled goat cheese

We loved these bacon jam crostini!  The jam was smoky and had a kicky punch from the reduced down balsamic vinegar.  The goat cheese crumbled on top had a mildly creamy tang in itself that blended oh so well with the jam.  My P.S. happened to be home and was given his own plate of crostini to devour.  Always criticial (in a good way) he suggested the baguette slices were too crispy and hard.  I disagreed, crispy was best for this appetizer.  I’d cut the slices super thin.

My only criticism would be that I’d have liked the crostini to be buttered.  Still crispy, but buttered before toasting so that there was a nice buttery tone to the finished crostini as well.  This might be my personal preference and is definitely is an optional suggestion I added to the recipe.  It was excellent without the butter thing!

In a large skillet, fry bacon until it has started to crisp and is browned, about 12 minutes.

Drain all but 1 tablespoon of the fat and the bacon from the skillet and add remaining ingredients.  Stir to combine, cover the pan and reduce heat to medium low.  Cook for 20 minutes undisturbed.

Remove the cover, stir and then partially cover the pan.  Continue to cook until most of the liquid is gone and the onions are a deep brown color. The mixture should be thickened and resemble a jam.

Taste test and add salt & pepper if necessary.  Remove from the heat and allow to cool.  Place in small jars and refrigerate until used.

I serve bacon jam spread on a crostini garnished with crumbled goat cheese and a sprig of parsley.  Or layer a cracker or crostini with a slice of brie or other cheese then top with bacon jam. As mentioned previously, buttering the baguette slices before toasting would be a nice touch.

Adapted from My Running Shoes Miss Me 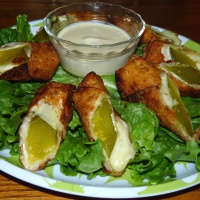