Here was the time I stood with sausage in my hand, a box of pasta, and wanted fajitas. Crazy, eh? I could see it happening. I just needed to measure up a batch of Julie’s fajita seasoning! I’d been wanting to try her fajita seasoning recipe since she posted it way back in April, hence my craving for fajitas. I would use it anyway, in my own weird way! 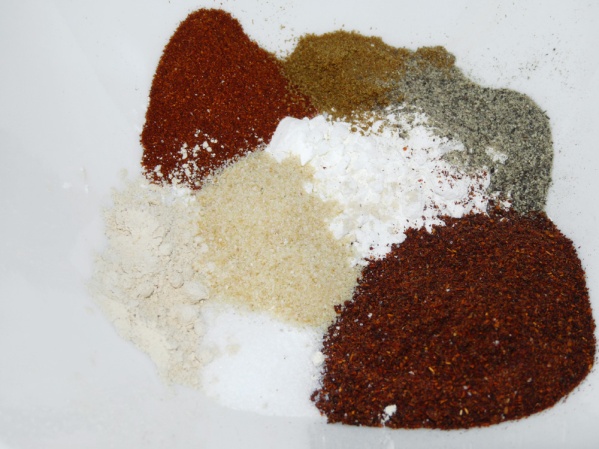 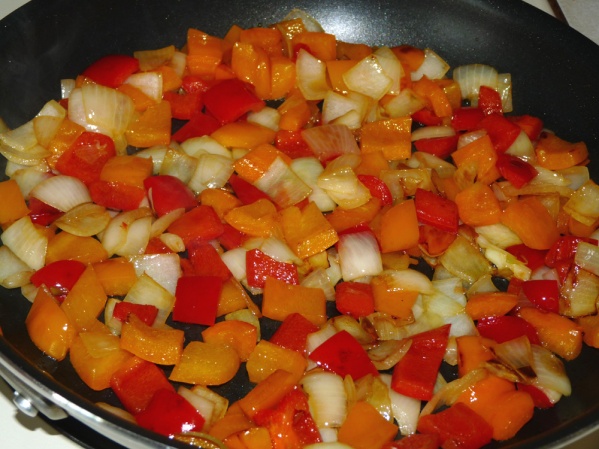 Sauté onion and pepper until onion begins to turn translucent

I used a large nonstick skillet heated to medium high with a drizzle of oil. A drizzle is about 2-3 tablespoons in my castle. I added the onions and peppers and let them sauté for several minutes until the onions were barely beginning to turn translucent. I wanted to retain the crunch of the vegetables, fajita style.

I added the fajita seasoning and stirred to coat the vegetables. After cooking for 2-3 minutes I added a 15 ounce can of tomato sauce and let it heat to bubbling. The sauce thickened due to the cornstarch in the seasoning mix and reduce slightly as it cooked.

While the onions and peppers had been sautéing I had brought a pot of salted water to a boil and cooked a bag of tri-color bowtie pasta to al dente. To be honest, I never time pasta. I watch it close and test it often since I’m usually standing nearby anyway. As a consequence I can’t ever tell you how long it takes to make al dente pasta. You could follow the box or package directions. They probably know what they’re doing. heh

Stir in tomato sauce and broth

When the fajita sauce had thickened and reduced a bit I add the drained pasta to the skillet and mixed it together. I’d reserved some pasta water to add in case my pasta got greedy and absorbed all of the sauce and became dry. That happens sometimes. I did add maybe 1/2 cup pasta water this time. Your results may differ. 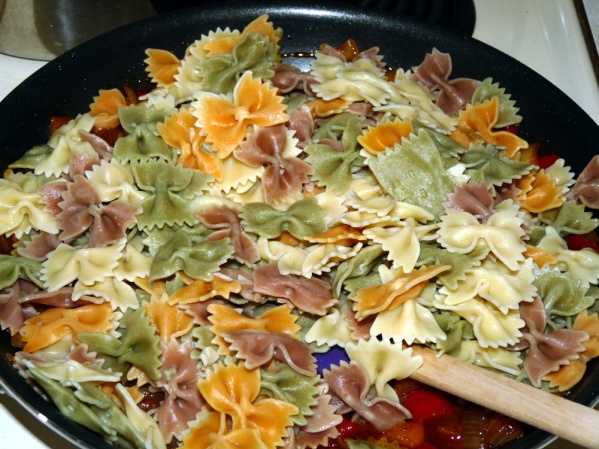 Add pasta and stir to coat. Add pasta water if it becomes dry

Also in the meantime I’d had my P.S. (Prepares Sausages/hubby) grill the sausages and get them browned and lovely. He sliced them up and added them to the pasta. I stirred again, taste tested for seasoning and dinner was served.

My fajita pasta kicked butt! Julie’s seasoning was excellent, tying together some unusual ingredients like pasta and sausages to the onions and peppers and making a truly tasty meal. It took fajita flavors and made it a comfort dish with pasta!

I got to try the fajita seasoning mix and have a pasta fix. I can’t wait to try the mix while actually making fajitas! Note to self: make soon!

Just one note on this recipe.  I didn’t have dried chicken bouillon for Julie’s recipe so I used a cup of chicken broth instead.  That worked because I was using the fajita seasoning in a sauce.  You’d want to use the dried version if you were making actual fajitas.

Grill or sauté sausages until browned. Slice and set aside.

Sauté onions and peppers in a drizzle of oil in a nonstick skillet over medium high heat for 4-5 minute or until onions begin to turn translucent.

Measure seasoning ingredients and mix together well before adding to skillet. Stir to coat and cook for 2-3 minutes more. Add tomato sauce and chicken broth and cook for several minutes until thickened and reduced, stirring occasionally.

Add drained pasta and stir to coat. If pasta becomes dry add 1/2 cup of pasta water at a time until desired consistency. Stir in sliced sausage. Taste test for seasoning.

Excellent reheated the next day.

Combine in a small bowl.
Equals one packet of fajita seasoning

Adapted from A Solitary Feast