I haven’t used zucchini in nearly as many baking dishes as I wanted to this year.  I’ve used massive amounts of zucchini but all things must come to an end.  I have two medium sized zucchini left and that will be the end for this growing season.  Sigh.  I had to try this cookie recipe.  I love oatmeal cookies and with chocolate chips it should be a huge success!

I mixed the dry ingredients in a small bowl and set them aside.

The recipe called for using a stand mixer and I was too lazy to drag it out so I used my hand mixer.  Same difference, just slightly more muscle power needed to mix the wet ingredients.  I beat the butter, sugars, egg and vanilla together until they were smooth.  The recipe had different directions but I decided to be even more of a rebel. 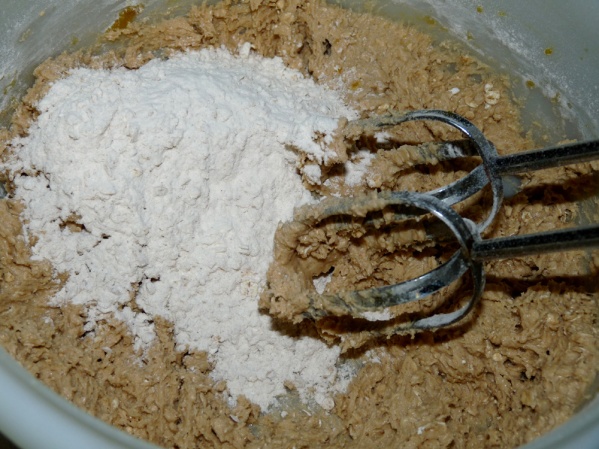 Next I beat the dry ingredients into the wet ingredients in four installments.  Or whatever it’s called.  It mixed easily with the mixer and didn’t bog down as much as I was afraid it would.

The zucchini was shredded and ready and went into the bowl next.  Again I used the hand mixer and mixed until it looked evenly incorporated.  I was done with the mixer, and scraped the beaters off into the bowl.

I used a large spoon to stir in the bag of chocolate chips.  I used semi-sweet chips, not being a huge fan of dark chocolate.  I almost used milk chocolate chips but thought the chocolate should have a little more punch that would result from using semi sweet chips instead.

Place in 2 tablespoon portions on a baking sheet

Evenly mixed, I used my larger cookie scoop and place the cookies far apart as suggested.  I got 8 cookies per baking sheet, but my scoop must have been smaller than the suggested size.  Instead of yielding 24 cookies, I got 32 out of the batch of dough.  No problem. 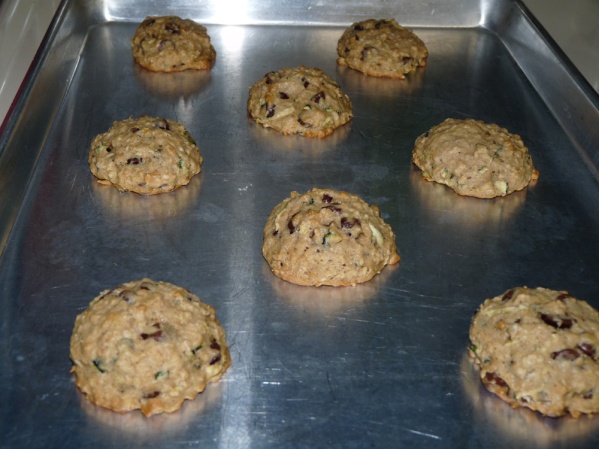 Bake until they begin to turn brown around the edges, 9-11 minutes

But I did have problems.  The first sheet of cookies baked and did not spread out.  They stayed put and puffed up and became the kind of cookies I hate.  Puffy cake-y cookies.  DRAT!  I pressed the rest of the cookies down flatter and put another sheet into the oven.  I wanted crispy, chewy cookies and these so far were not as advertised.

Flatten to get them slightly crispier around the edges

The next pan came out much the same; the cookies didn’t spread out and get  crispy in any sense.  I gave up knowing my P.S. who loves cake-y lumps of cookies would be pleased.   But what annoyed me most was that I could have baked 15 cookies on each pan and not had to wash 4 sheet pans afterwards, two would have sufficed.  They just didn’t spread out.

The flavor was good, the cinnamon adding a nice touch to the chocolate chip cookie.  The zucchini was just there in name only or for the visual effect since it has very little flavor.  I probably wouldn’t make them again but I did try a zucchini cookie recipe this year.  That was my main goal.  I guess what I’d hoped for, as I sat and tried to eat a whole cookie, was a monster cookie with zucchini.  You know, flavorful and chewy.   Next I’m going to just make monster cookies and put in zucchini.  I’ll let you know how that comes out!

In a small bowl whisk together flour, cinnamon, baking soda and salt and oatmeal.  Set aside.

In a large bowl cream together butter, sugars, egg and vanilla until creamy.  Beat in zucchini and with mixer set on low speed, slowly add in flour mixture. Stir in chocolate chips.

Bake in preheated oven 11 – 14 minutes until edges are lightly golden. Cool on baking sheet 2 minutes then transfer to a wire rack to cool completely. Store in an airtight container.