I was so successful with my Lasagna Soup several times, I decided to create an enchilada soup.  It would be similar to my lasagna or tortilla soup, but with the flavors of an enchilada in a more liquid form, served in a bowl.  Tortilla strips would be the crowning touch and it would be a hearty bowl of goodness.  Ready, set, go!

As in all of my recipe creations, I first did a search to see how many people already had the idea before me.  Not as many as I’d have guessed!  I ended up mostly winging it and creating a beef version that tweaked my chosen recipe beyond recognition.  I cited the recipe anyway, since it did inspire me quite a bit. 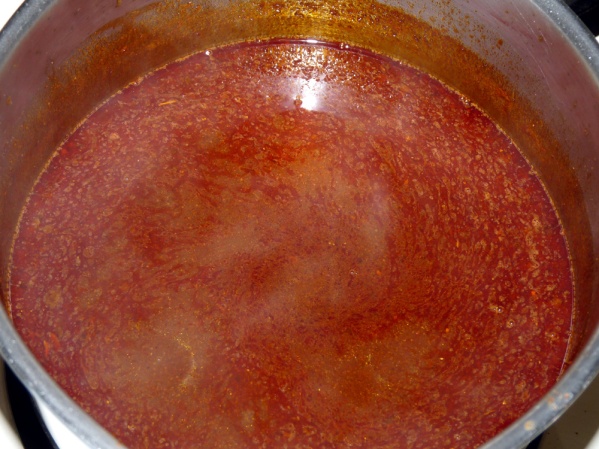 I began my soup by making enchilada sauce from scratch.  I’d done that once before but couldn’t find the recipe again.  I tried a new recipe and my enchilada sauce was made in about 25 minutes.  Enchilada sauce is so easy to make, I don’t think I’ll ever buy it in a can again.  Nothing beats the homemade flavors that are much more satisfying!

In a large nonstick skillet I browned my beef and onion over medium high heat, letting the beef get caramelized brown on the first side before breaking it into smaller pieces.  I transferred the meat mixture to a large crockpot.  I added the 2 cans of drained and rinsed black beans and a can of whole corn and the juice.

I added my last garden green pepper, diced, along with a diced red pepper and the last 2 jalapenos I’d frozen at an earlier date.  I also added about 3 tablespoons of the frozen Hatch chiles I’d roasted and frozen earlier.  I was using all kinds of vegetables grown in our garden!  I diced a large onion and added it to my soup crockpot. 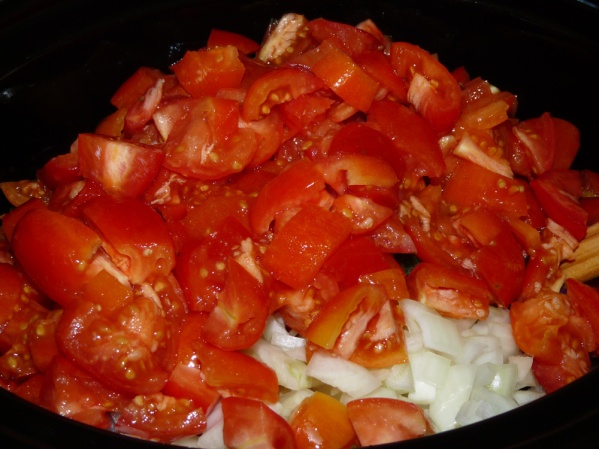 I had several Romas left from the last harvest from the garden and diced them and added them to the crockpot.

I added the 4 cups of homemade enchilada sauce along with some cumin, garlic powder and oregano.  I stirred the crockpot’s ingredients well until I was satisfied they were all playing together well then put the lid on the crockpot.  I set the heat for high and let it cook for about an hour.  I set a timer and after an hour I stirred the soup and turned the heat to low.  I set the timer for 3 hours and let it gently bubble away.

I served the enchilada soup with chopped avocado.  For once I was out of sour cream, which would have also been a nice garnish for the soup.  We loved it!  The flavors were spot on for an enchilada.  I’d wondered how I would tell the difference between enchilada soup and my usual tortilla soup.  I usually make tortilla soup with chicken so the ground beef made it seem like an enchilada.  It was rich and flavorful with just the right amount of heat.  That could always be adjusted and amped up if you like more of a burn.

I’d stirred in all of the tortilla strips without thinking.  With just my P.S. and I eating, we barely put a dent in the soup.  This is a large pot of enchilada soup!  The leftovers were even better, after the spices had time to mingle more.  But the strips were soggy and not as pleasant as the first day.  If you plan to have leftovers, you might want to place the tortilla strips per bowl as you serve so they will be fresh again the next day.  If you don’t mind, go ahead and add them all the first day.  We didn’t mind. 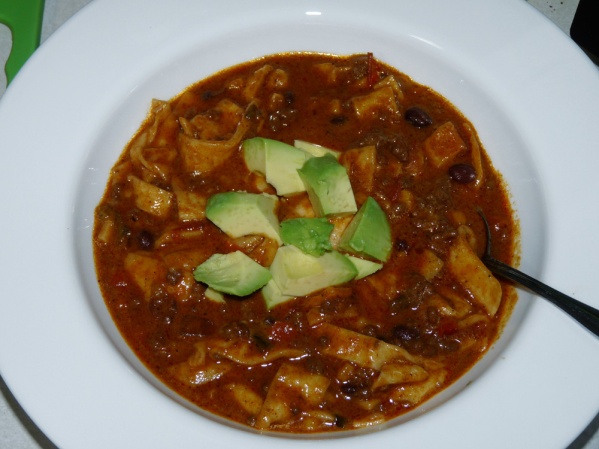 Stir and reduce heat to low for 3 hours.

Stir in sliced tortillas and cheese.  Or place tortilla strips in soup bowls, ladle in soup and sprinkle with cheese.  The tortilla strips will soak up a lot of liquid and become soft and squishy when leftover.  If you plan to not have leftovers, add them directly to the soup.