I have not been keeping up with my fritter making hobby!  It’s been awhile since we’ve enjoyed a patty of crispy goodness.  My P.S. (Prepares Steaks/hubby) was grilling T-bones for dinner and we needed a side dish.  I was in the mood for potatoes and a potato fritter seemed like a great idea.  Adding the things I’d usually use for a loaded baked potato was also a great idea.

Let’s just agree up front that this really was hash browns.  Loaded hash browns.  But since I put an egg in it, it qualifies as a fritter.  That’s the simple difference between the two.  One beaten egg.  But I don’t have a hash brown fixation.  So thank goodness I used an egg and made it into a fritter, because I do have a fritter fixation.

Shred potato, leaving the skin on

My P.S. brought home potatoes from the Heritage Society he’s a part of and they were huge and gorgeous.  I’m pretty sure neither of us could eat a whole potato, so I had to work around their size when I used them for meals.  I shredded one large potato and it was probably closer to 1 1 /2 cups than 1 cup.  A little more or less won’t break this recipe.

I also shredded up about 1/2 cup of garden carrots.  Although they’re not a traditional loaded potato ingredient, I wanted some orange color and I just like carrots.  I added a handful of chopped parsley from the garden, an egg, some chopped green onions, a sprinkling of garlic powder, salt and pepper and mixed well.  I was proud of myself for NOT adding shredded zucchini to this recipe.  It took willpower, I tell ya!

My P.S. had just started the grill and I knew it would be awhile before it was heated and the steaks were grilled so I did a test fritter.  Just to see how it would fry and taste.  And I was starving!  It fried pretty fast and got deliciously crispy.

When it was closer to the time when the steaks would be done and resting, I portioned the mixture into 5 patties and fried them in a drizzle of oil and a tablespoon of bacon grease on medium high heat.  I think they cooked about 4 minutes on one side and 3 on the other.  Unfortunately I didn’t time them.  It’s best to eyeball them anyway, when they’re brown, flip them then serve when both sides are browned.

I served the potato fritters with a small dish of sour cream for dipping.  Or place a dollop on top for eye appeal.  I did both, but I’m a huge sour cream nut.  Oddly enough it doesn’t affect my lactose intolerance. 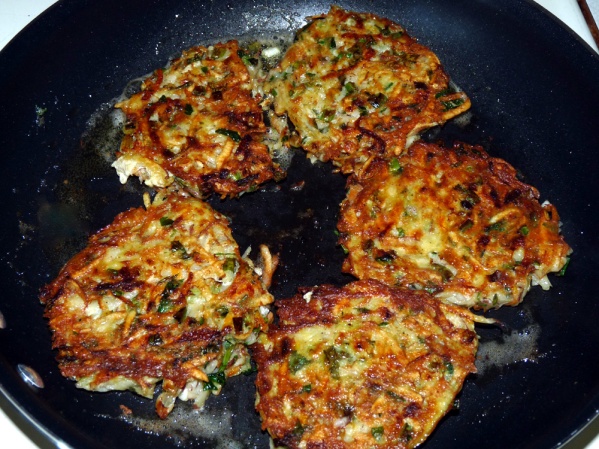 The loaded potato fritters were excellent.  Nice and crispy, they had just the right flavors to remind us of loaded baked potatoes.  The bacon grease was a good way to represent the bacon bits that are often sprinkled on the potatoes.  For an added boost, you could fry some diced bacon and add it to the mixture before frying the fritters.  We’d had bacon often lately and skipped the actual meat part.  The grease satisfied that need anyway.

I found myself wishing we had leftover fritters.  They’d be great reheated in a skillet in the morning and served with a nice runny fried egg on top.  It might be worth making extras next time and freezing them for fast breakfasts.  Something to think about.

In a large skillet heat bacon grease and oil over medium high heat.

Mix the rest of the ingredients in a bowl.  Using a tablespoon, form 4-5 patties in the skillet, pressing to flatten.

Fry on first side until dark golden brown.  Flip and fry on second side until browned as well.

Serve hot with a side dish of sour cream.

Tip: We save all of our bacon grease in a mason jar in the fridge.  It’s handy to add a little hint of bacon flavor when frying foods such as potato fritters!

Adapted from All Recipes

One thought on “Loaded Potato Fritters”