My sisters and I were talking about Swiss steak the other day.  I said I wanted to make it soon and blog it for posterity.  Sister Dawn said she hated when my mom made it, she was not a fan.  Sister Linda laughed and asked if I had a square electric frying pan to make it in.  True, when I think of Swiss steak I imagine it in that electric frying pan my mom used for dishes that required simmering over a long period of time.

Curiosity made me research the origin of Swiss steak.  I’d always assumed it wasn’t Swiss in origin, and indeed that is true.  It’s named after a technique called “swissing”, which is tenderizing a cut of meat by rolling or pounding.   My P.S. (Pounds Steaks/ hubby) always insists I must tenderize the steaks before dredging in flour and frying.  I’ve continued to do that to please him.  I wasn’t sure if that was necessary as the crockpot creates a tender steak that nearly falls apart anyway.  Now I realize to truly make it “Swiss”, it should indeed be pounded!  So that answered that question.

I’d long ago modified my mom’s recipe to suit my family.  I like a little sweet bell pepper and celery in the dish.  I also like to include the mushrooms which are optional.  In my research I found a mushroom sauce or tomato sauce is common for Swiss steak to exist.  My sauce is a combination of both.

Salt and pepper each side of the steaks and dredge in flour.

I always cut the steak into smaller pieces and cover each one with plastic wrap before pounding the daylights out of them.  A minute or so is long enough really. unless you want to make it a workout of sorts.  Then pound away!  I salt and pepper each side of the steaks and dredge them through flour.  You could season the flour instead.  I’m just used to seasoning before flouring the meat.  Habit!

Heat skillet to medium high with a drizzle of oil. Sear steaks on first side until nicely browned. Turn and sear on the second side.

I make sure my skillet is heated with 2 tablespoons of oil before I sear the steaks on both sides until they are browned in places and the outside becomes almost hard.  You will thank yourself later at the wonderful flavors that result from the intense browning.  About three minutes on each side is a good measure.  Your eyes will tell you when they’re ready to flip then remove.  Put the seared steaks into the crockpot.

Place steaks on the bottom of the crock pot.

To the remaining juices in the skillet I add another tablespoon of oil and sauté my diced onions, celery and pepper until it is also nice and browned around the edges.  More browning that creates that extra flavor!  I add the vegetables to the crockpot.

In the same skillet add another drizzle of oil and saute the onions, celery and peppers until beginning to brown around the edges

I like a good amount gravy for the rice, and a little leftover for the next day so I use a 28 ounce can of diced tomatoes.  Tomato gravy!  You could reduce that amount if you’re not a tomato gravy addict like me.  I add the tomatoes to the crock pot along with a teaspoon of oregano and one bay leaf.

My recipe lists the peppers and mushrooms as optional but I try to include both.  This time I had a small handful of mushrooms in the fridge so I sliced and put them into the crockpot.  A careful stir to integrate the ingredients and the Swiss steak is ready to cook.  I place the lid on the pot and set the heat to high for an hour.  Later I reduce the heat to low and let it simmer for 4 more hours.

Add sliced mushrooms to crock pot and stir the blend

I don’t stir the Swiss steak as it cooks.  I do lift the lid and smell occasionally, just to make sure nothing is burning.  (And because the smell is intoxicating!)  The bay leaf’s flavor turns what is usually a very Italian blend of ingredients into a dish that is something very different!  That always amazes me.  Or maybe I’m easily amazed.  Hm.

Cover and cook on high for one hour, then reduce heat to low and simmer for 4 hours.

Remove steaks from crock pot and set aside. Make slurry of cornstarch and cold water and stir into crock pot contents. Stir until it begins to thicken. Place meat back into the crock pot and cover. Let simmer for 30 more minutes.

I taste test my Swiss steak sauce and add salt and pepper, stir one last time.  For dinner I served the Swiss steak over rice.  Sometimes I serve the steak and tomato gravy over egg noodles but this particular time I was in a rice mood.  When I did a Google image search they placed it on all kinds of things like mashed potatoes, spaetzle and biscuits.  The picture where it was served over cooked cabbage had me drooling.  Must try that next time! 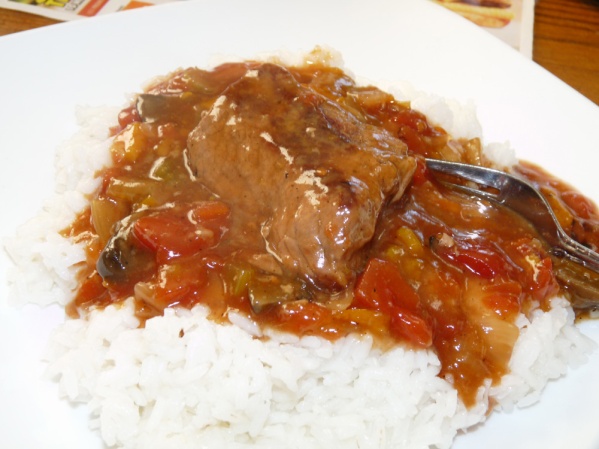 The Swiss steak was as delicious as I’d remembered.  I’m not sure why I don’t think of making Swiss steak more often.  We did eat it often when I was a kid and I put the gravy over bread.  My P.S. loves it and is always eager for dinner when I make it.  Maybe this will be a reminder to take the time to prepare it more regularly!

Cut meat into 4 pieces and cover each with plastic wrap.  Pound each piece with a meat tenderizer for a minute or two.  You could skip this step.

Heat nonstick skillet with 2 tablespoons oil and sear meat on both sides until browned in places and crispy, about 3 minutes per side.  Place meat in bottom of crockpot.

In same skillet, using the meat drippings and another tablespoon of oil, sauté the onion, celery and peppers until browned around the edges.  Transfer to crockpot.

Add tomatoes and mushrooms to crockpot and stir to mix.  Cover and cook for 1 hour on high, then reduce heat to low and cook for another 5 hours.

Remove meat from crockpot onto a plate and make slurry of cornstarch mixed in cold water.  Stir into crockpot until sauce begins to thicken.  Add meat back and replace cover.  Cook for 30 minutes.  Taste test and season with salt and pepper to taste.

Serve over rice, noodles, potatoes, biscuits or even cooked cabbage.