I’ve been sitting on a little pile of beets from the farmers market.  I wasn’t trying to hatch them, although if that worked and produced another pile of beets I might consider that…  but I digress.  Beets!  I wanted a cold beet salad that was different and this certainly promised to be both different and delicious.  I was off to make a new form of vegetable and fruit deliciousness.

I adapted the recipe from the start.  I didn’t see the need to oil the beets while roasting them in foil.  I just cut them into similar sizes, placed them in a large foil packet and set them on a sheet pan in the oven.  My beets were small so I poked them after 40 minutes of roasting to see if they were softened yet.  Nope, still firm.  After another 20 minutes they were tender.  Not soft, just right. 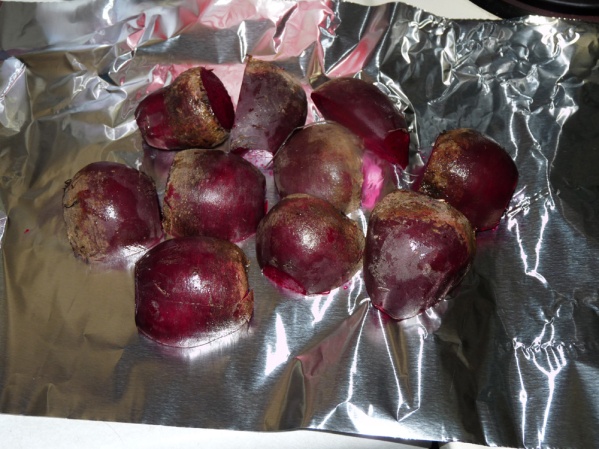 Trim ends off bets and cut into equal sized pieces

I removed the beets from the oven and let them sit on the stove until they were cool enough to handle.  I used my hands to remove the skins and when peeled I diced the beets and placed them in a container.  They could cool further overnight in the fridge.  I’d have preferred to do this beet roasting on the grill for that lovely grilled flavor but the castle’s grill is still out of commission.  Broken.  Grrr.

Wrap in foil packet and place on sheet pan. Bake at 375°F until fork tender

A quick trip to the store later and I had my goat cheese and celery leaves.  I have to say that’s a first for me, I’ve never shopped for celery leaves before.  I discovered the leaves were in the centers of the heads.  Silly me I knew that!  I freeze them for soups and making vegetable broth.   And yes, celery is grown in “heads”, I looked that up.  I thought they were stalks.  I was wrong.  A stalk is each stick on the head.  So now you know.  And yes, I still dislike celery.  Not hate, hate, just prefer to avoid.  I would eat it this time because the salad needed the contrast.

Whisk together vinaigrette and refrigerate until used

I further adapted the recipe because I’m not a pomegranate fan.  But I did have a lot of wild blueberries in my freezer, courtesy of my P.S.  He spent a few days in the woods with his uncle again this year and brought home 6 gallons of sweet, ripe blueberries.  We have blueberries frozen for many, many dishes and baking adventures!  This salad would benefit by having lovely blueberries in it. 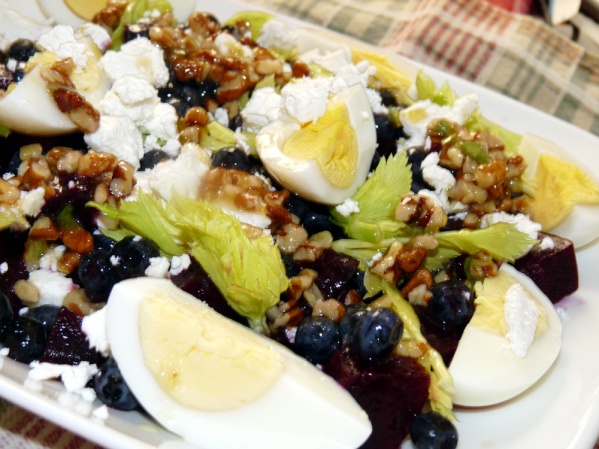 I also boiled the eggs the previous day, leaving them whole until I was ready to make the salads.  I wanted the eggs to be cold and making them ahead was the simple solution.

The last thing I prepared ahead of time was the dressing.  Not an almond fan, I used pecans.  What! you just wondered?  She doesn’t like almonds, pomegranates and celery and she looked at the recipe and drooled?  Well yes, I imagined it adapted to my own tastes.  Substitutions and Tweaks R US.  It’s all for the sake of some roasted beets, anyway.  The rest is creative license on the part of the cook.  I mixed the vinaigrette ingredients and stored it in a container in the fridge. 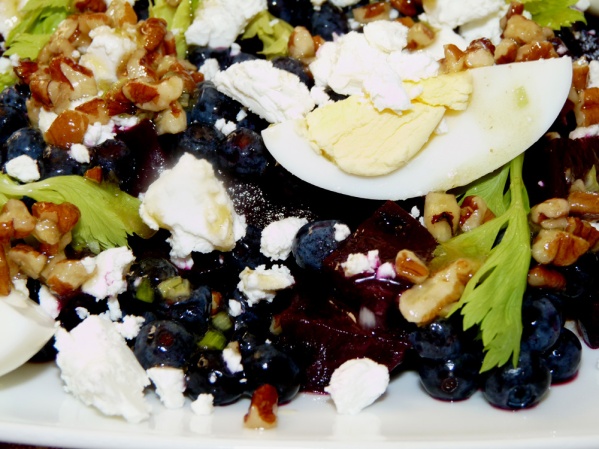 So the next day I divided the diced beets onto two plates.  I garnished them with the celery leaves, crumbled bits of goat cheese, blueberries, and dressing.  The colors were so lovely!  The smell was even better.  And the taste?  Bliss!  Earthy roasted beets, creamy and tangy goat cheese, sweet blueberries all brought together with a nutty vinaigrette with a bite.  I could go on and on.  But I have to admit I forgot the thinly sliced onions.  Oops!  But it was definitely a salad worth making more often.  Now I need to hatch some more beets…

Wrap each beet in foil and place on a baking sheet in preheated 375°F oven.  Roast until beets are softened, checking after 40 minutes.  Time will vary based on size of beets.  Mine took an hour.

Remove beets from oven and let cool to touch.  Rub skins to remove and dice into 1″ pieces.  Refrigerate overnight or until ready to serve.

Boil eggs and let cool.  Refrigerate overnight or until ready to serve.

In a bowl add nuts, honey, vinegar and shallot.  Whisk well then drizzle oil into bowl while whisking.  Refrigerate overnight or until ready to serve.

When ready to assemble, slice onions thinly.  Peel and quarter eggs.  Place beets on plates. Sprinkle with salt and pepper to taste.  Garnish with onions, blueberries and eggs.  Break apart goat cheese and sprinkle over salads.  Drizzle with vinaigrette and serve!