I do love my soups and when we dine out I get a chance to find more soups to copy and recreate. I had Panera’s broccoli cheese soup a few weeks ago and have been craving another bowl ever since.  From the farmer’s market, I now had two large heads of broccoli in my fridge.  It was time to use some of that broccoli in a new soup recipe. It was a dreary day that needed a cheerful slurp of soup!

I semi-followed a recipe of the Recipe Critic. I made my pot of soup a little larger since I wanted to make a large dent in my broccoli supply. I pretty much doubled everything.   And I wanted to use the corn broth I’d made. 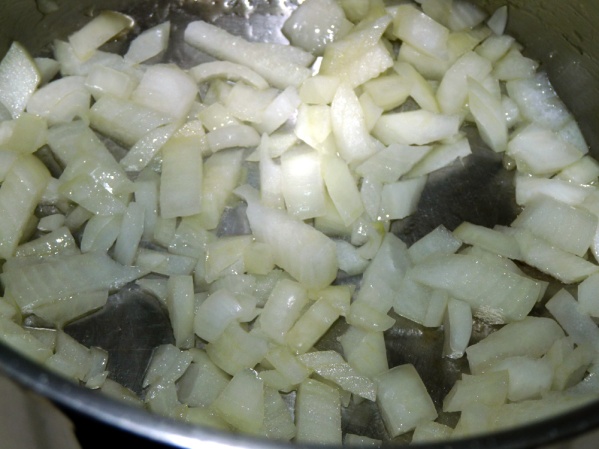 I started with an onion that yielded almost a cup of diced onion. I added that to the soup pot with a drizzle of oil and sweated it until it was translucent.  The onion was browned here and there and left a lovely brown mess on the bottom of my pot. I scraped it and it became a delicious part of the soup. Almost a caramelized touch.

Add butter and flour and make a roux

I added 1/2 cup butter and let it melt as I scraped more of the fond off the bottom of the pot.  Then it was time to add the 1/2 cup flour and stir.  I let it cook for about 5-6 minutes to cook out the raw flour flavor. 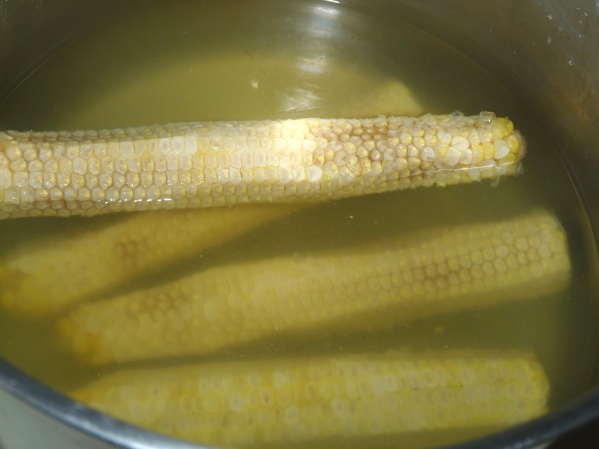 Use the corn cobs to make corn stock

Earlier I’d made corn stock out of 4 ears of corn I’d used the previous day in another recipe.  I let the cobs simmer in water for a couple of hours until the broth was milky and had that lovely corn fragrance.  I strained it and put it into a container.  Now I used about 6 cups of the corn stock along with 2 cups of half and half.  I added a seventh cup of corn stock to thin the soup broth a bit.

Add corn stock and half and half

I let the broth simmer on medium low for 15 minutes then had to scrape the bottom of the pot again.  It was a sticking to the pot kinda day!

I’d shredded a large carrot from the garden that yielded about 2 cups.  I added the carrot to the soup pot and stirred well.

Finally I added about 5-6 cups of broccoli I’d cut into smaller florets.  I stirred and let the soup simmer for 20 minutes, stirring occasionally to prevent more bottom stickage.  Is that a word?  Autocorrect highlighted it, guess not.  Well you know what I mean.  Stuck to the bottom.

I taste tested the soup and added a handful of salt.  My homemade stock didn’t have any salt nor did any of the other ingredients.  It needed a good dose of salt and a good amount of pepper.  It’s a season to your own taste kind of recipe.  I also added 1/2 teaspoon of nutmeg, twice what the original recipe called for.  It made me nervous to use so much but it was a good ratio.  The nutmeg is way in the background, not right up in your face! 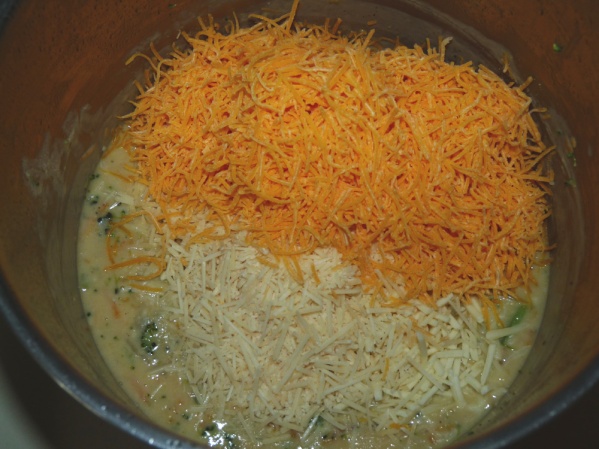 Smooth in cheeses until melted and smooth

I added 4 cups of shredded cheddar cheese and 1/4 cup Parmesan to the soup just before serving.  I stirred and let the cheese melt before ladling it into bowls.  Another recipe I’d found had added a bit of Parmesan as a secret ingredient and I found it provided a nice extra pop of cheese flavor to the soup.

We had the soup for dinner with sandwiches and I was super pleased.  It was so much like Panera’s I was impressed.  I was also disappointed my recipe only made 4 good-sized portions of soup.  I wanted to eat this soup every day for a week!

I’d say this was an easy soup to make.  The only part that was a touch annoying was cutting up the broccoli into smaller pieces.  But hey, to get something that tastes THIS good, it was worth hacking away at the little branches! 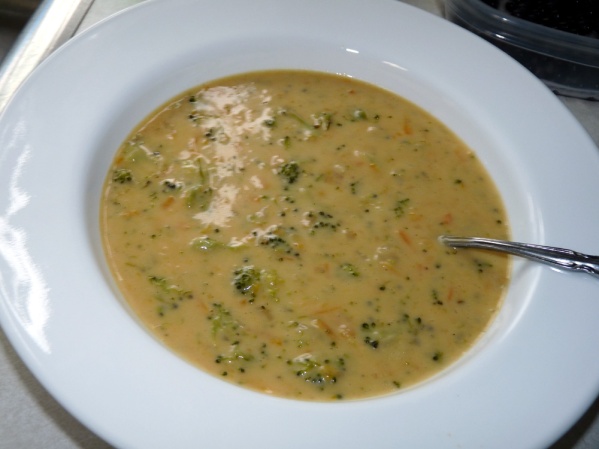 Sauté onion in a drizzle of oil in the soup pot until translucent.  Some browning may occur and is welcomed for extra flavor.

Add butter to the pot and let melt then stir in the flour.  Cook for 5-6 minutes, stirring constantly.

Add broth and half and half and stir until it begins to thicken.  Turn heat to medium.  Add carrot, broccoli and nutmeg.  Stir well and let simmer for 20-30 minutes, until stems of broccoli are tender.  Stir soup occasionally to prevent burning to the bottom of the pot.

Just before serving add cheeses and stir until smooth.  Add salt and pepper to taste and serve.

Adapted from The Recipe Critic