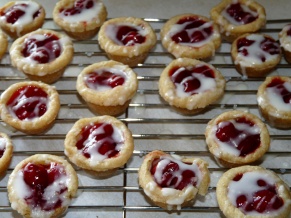 I’ve been wanting to make cookie cups out of sugar cookie dough for a few years and this year was time to make them!  I bought a roll of sugar cookie dough and set to work.  First mistake: I bought a 30 oz roll of dough instead of the 16.5 oz roll the recipe required.  Oops!  I noticed early enough so I redid the first few balls and continued from there.  I would see this through!

Make sure your roll of sugar cookie dough is 16.5 ounces, not 32 like I bought! I eyeballed slightly over half of the roll and saved the rest for another day.

I eyeballed a little over half of the roll, set it aside, and put the remainder of the dough in a container in the fridge to think about at another time. 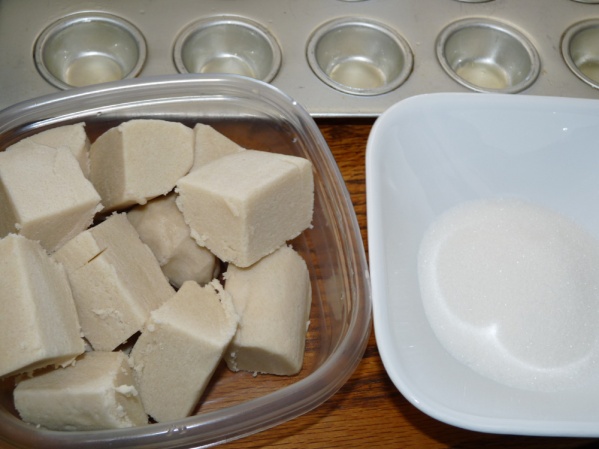 I was focused on this project!  I rolled the balls then rolled them in sugar.

Roll each piece into a ball and roll in sugar.

I placed the balls int0 the sprayed mini muffin tins and pressed them down slightly to make sure they stayed centered in the cups. 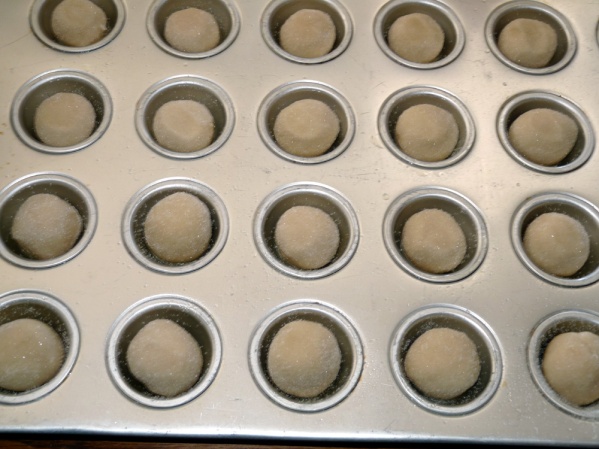 I slid the pan into the preheated oven and set the timer for 15 minutes. 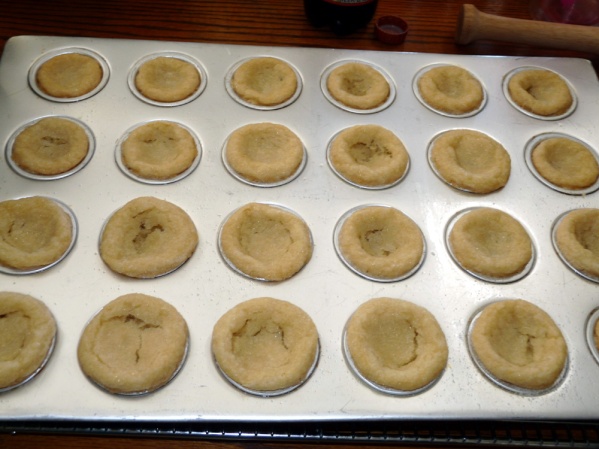 Bake cups for 15 minutes. Cups will be indented. Remove from oven.

While I waited I opened the can of cherry pie filling and placed it in a container that was easy to spoon out of than the can.

Make indentations in cups with a tamper or other tool.

When the timer beeped I checked and the cookie balls looked done.  I set the muffin tin on a rack and used my tart tamper to press indentations in all of the balls.  I love having excuses to use my little wooden tamper.  It makes some things SO much easier than before!  I know what I did without it, I screamed.

Fill cups with a tablespoonof pie filling. 2 or 3 cherries per cup with glaze worked for me.

When the indentions were made I carefully spooned tablespoons of cherry pie filling into each cup.  Two or three cherries and some syrup fit into them nicely depending on the size of the cup. 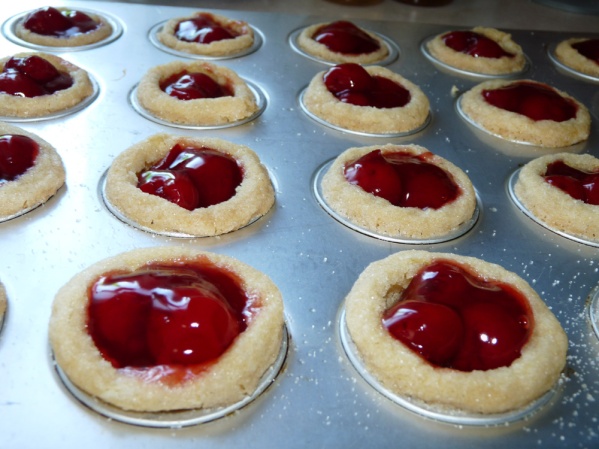 Return to oven and bake 7-9 minutes or until they begin to turn a light golden brown.

I returned them to the oven and baked them for 5 more minutes as suggested but let them go another 3 minutes.  You’ll know when there is a little brown appearing around the outside of the cups.  You need that for them to be firm enough to hold up.

I set the pan on a rack and waited about 5 minutes before removing them from the cups.  A knife wedged down the side popped them out easily, for the most part.  There was that one that wouldn’t play well…

Cool and remove from tray with a butter knife. Whisk together glaze and drizzle over the cups.

I mixed the powdered sugar, melted butter and a tablespoon of milk until it was smooth and lump free.  When the cherry pie cups were cooled I drizzled the glaze back and forth over the tops with a fork.  My glaze was a bit runny but the were iced good enough to suit me!

I put the cups into a container, put a lid on the container and put them into the freezer.  They were waiting for the Christmas Eve dessert buffet!  I admit I did taste one and just loved the flavors.  How interesting to have a sugar cookie as a crust for a cherry pie!  I think blueberry pie filling would be a good alternative for my next try!

A quick note: in the freezing and thawing the cups became soggy and unpleasant.  I would suggest you make them and eat them promptly.  Refrigerate, but do not freeze.

Divide cookie dough in half; cut each half into 12 pieces.

Roll each piece of cookie dough into a ball then roll in sugar.  Place in a muffin cup.

Bake in preheated oven for 15 minutes.

Remove from oven.  Press hollow in center of each cookie cup.  A tamper works great for this if you have one.

Return to oven and bake an additional 5-7 minutes, until the cups are just beginning to turn golden brown.

Drizzle with a mixture of powdered sugar, melted butter and milk.

Store in refrigerator.  They do not freeze well; they become soggy.