This is a recipe where I amazed myself.  I’ve never made a spiral ham, nor have I made a ham in the crockpot.  We dine out on Easter; it’s the one holiday that I don’t cook.  So when my P.S. (Purchases Surprises/ hubby) brought home an almost 9 lb spiral cut ham, I was temporarily stumped.  I had no idea if it should be cooked or just eaten as is.  Pinterest to the rescue!  Then, bam! Success! 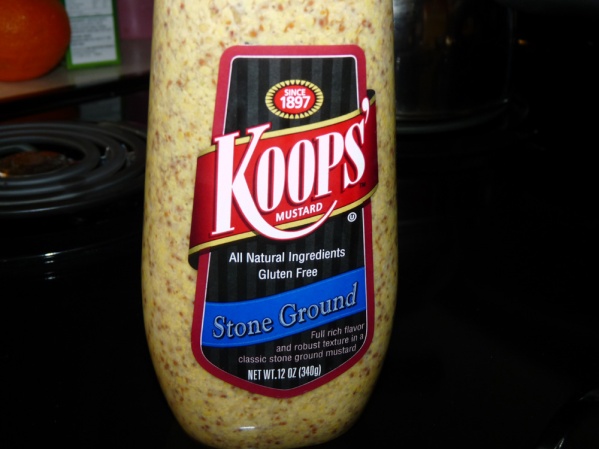 I looked at many recipes and they were all fairly similar.  I went with my own version, based on my like of brown sugar and dislike of honey.  Also my like of pineapple and the fact I didn’t have orange juice on hand.  Then I decided to use stone ground mustard instead of Dijon.  It was that simple!

Place ham in crockpot, flat side down

I took the ham out of the packaging, which was no small task.  You have to use a paring knife and cut around and around until you can peel off the heavy plastic covering.  Then I picked the ham up and plopped it in the crockpot on its flat side, as the recipes all directed.  Simple?  Well… my P.S. helped me remove the ham from the crockpot to a platter afterwards and noticed I’d forgotten to remove the round plastic shield that said “remove before cooking”.

Well!  I didn’t look at that bottom side, how would I have seen that?  And I didn’t know to expect a plastic thingy on the bottom.  My P.S. said it is put there to prevent the ham bone from poking through the packaging.  Ok.  Now I know.  Noted and will not bake it again, if I ever make a spiral ham again!

Ham in crockpot, I noticed it was quite a bit taller than my crockpot.  I was going to cut a slice off and tuck it down the side to roast, as one blog had suggested.  Ooops.  Not possible.  That tall, top part was bone.  Aside from getting the chain saw out of the garage, my ham was going to remain tall.  Not a huge problem, however.  Another blog had suggested to cover the crockpot with foil instead of the lid.  I could do that!

Next I pulled the stone ground mustard out of the fridge.  I’d bought it to use one lousy tablespoon for a recipe so this was going to be its chance to be useful again.  I used about 1/4 cup and rubbed it all over the outside of the ham.  I used brown sugar instead of honey or maple syrup to sweeten the glaze on my ham.  I like brown sugar.  I patted it all over the ham, using about 1 cup of brown sugar. 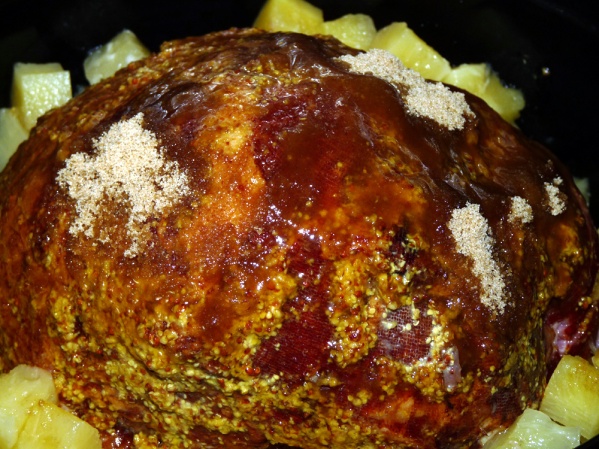 I like pineapple with ham.  It’s a given.  They just go together in my mind and on my taste buds.  I poured a 20 ounce can of pineapple chunks around and over the ham.  Done!  Glazed and ready to cook! 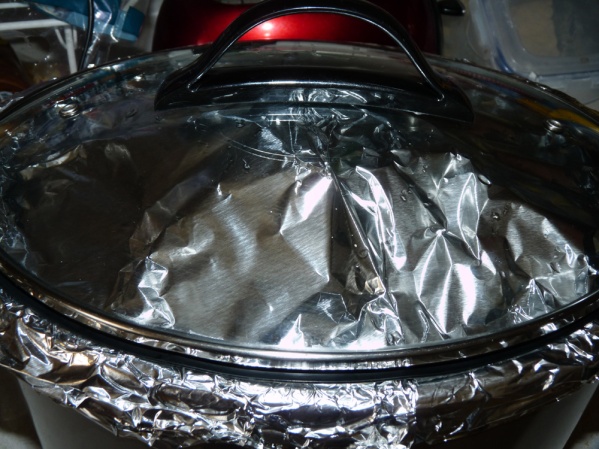 Cover crockpot with lid. I ham is too tall, cover with foil

I used two sheets of foil to cover the crockpot since one wasn’t wide enough.  I crimped the foil around the outside of the crockpot and plugged it in.  I set the temp for low and timed it for 6 hours.  My P.S., who had been watching me skeptically, set the lid on top of the foil to “weigh it down”.  I’m not sure the ham was capable of escaping to do laps around the house, but I left the lid on top.  Just in case.

Set control to low and cook for 6 hours

We went off shopping for the day and returned home to a house that smelled of heavenly ham.  Oh my goodness!  I went to check on the crockpot and it was just beginning to drip moisture down the sides and onto the counter.  I decided it was done.

Remove ham from crockpot and let set for 10 minutes before serving.

My attempt to remove the ham to a platter went a little bad, with a chunk falling off and back into the ham juices.  I had my P.S. do a lift and drop while I held the platter and that was more successful.  We both started eating little bits that had fallen onto the platter and a lot of “mmmm”ing was done.  My P.S. announced he was making sandwiches for dinner. 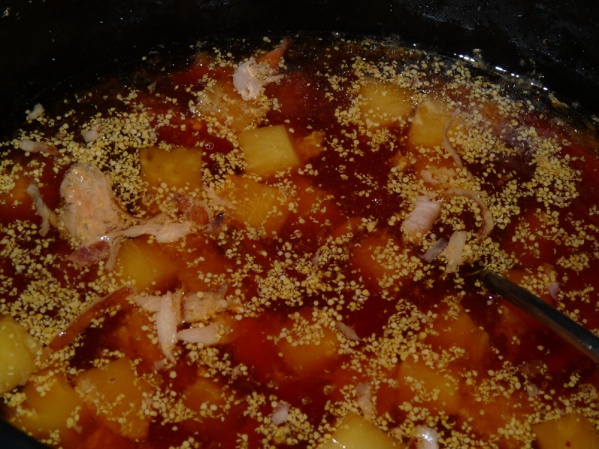 Pour crockpot juices into a container and refrigerate for future use

I’m going to post the ham gravy I made from the leftover juices in a separate post.  I poured the juices into a container and let them cool before refrigerating.

We ate ham sandwiches made with French bread and just a smear of whole grain mustard.  Yum!  The ham was gently glazed and perfectly moist.  After the ham had cooled I pulled it off the bone easily in pieces and placed it in containers for storage in the fridge.  I placed the bone in another container to make ham broth the next day.  So much delicious ham, so much time to find recipes.  Or just eat a lot of sandwiches.  We’ll see!