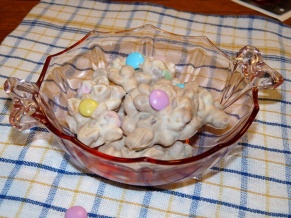 I’ve seen various crockpot candy posts around the holidays and meant to try one. My mom made the chocolate version for Thanksgiving and while playing Bananagrams I might have eaten my weight in little piles of chocolate and peanuts. Oink! So I didn’t need to make any more at that time. With Easter, I saw the colorful pastel little mounds of goodness and had to try them finally!

I actually had a package of white almond bark and a whole jar of peanuts in my baking cupboard. I just needed a trip to the store for another jar of nuts, another package of bark and a package of pastel M & Ms. I would skip the sprinkles, I don’t like hard crunchy bits on top of baked things. As I stumbled around the store looking for where they hid the Easter M & Ms I cursed the flu I was still dealing with, day 5. I blame the fever for even making candy while under the weather. That and my fascination for M & Ms in any form! 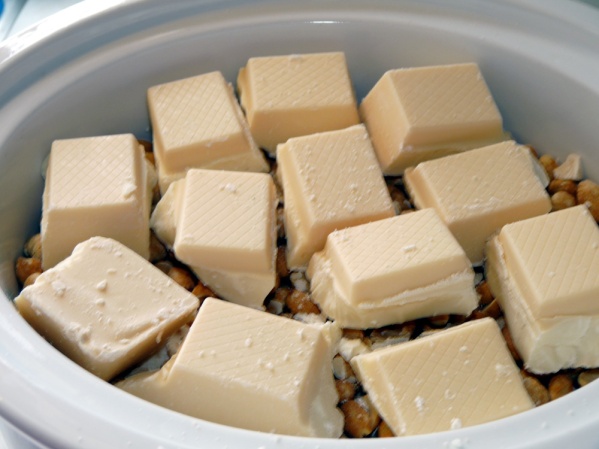 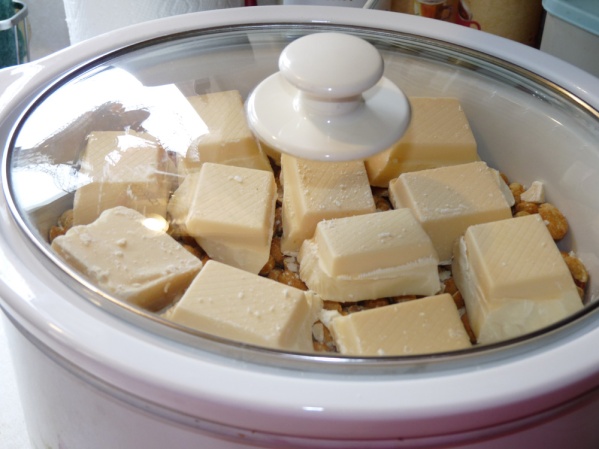 Place lid on crockpot and set timer for 1 hour

I set the crockpot for low and the timer for one hour and put the lid on. 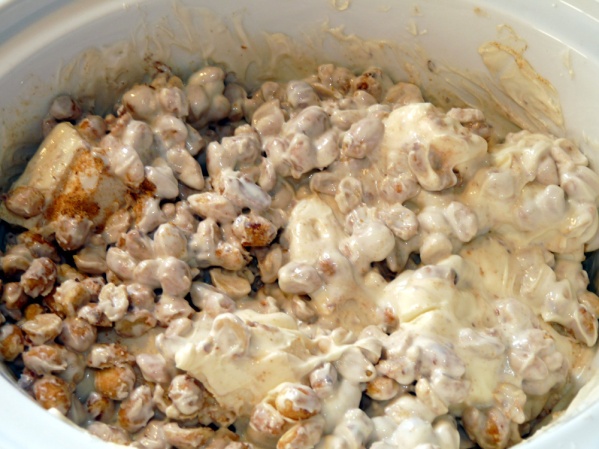 Stir peanuts and almond bark well. Place cover on crockpot and set timer for another hour, stirring every 20 minutes

After an hour I stirred well and set the timer for another hour. 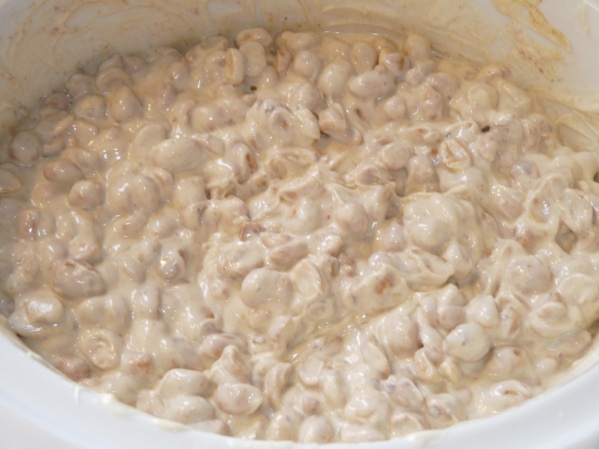 Cook until almond bark is fully melted and peanuts are coated. I only needed the first hour plus 20 more minutes

I was going to stir the pot every 20 minutes as suggested but after the first 20 minutes the bark was all melted and it was ready. 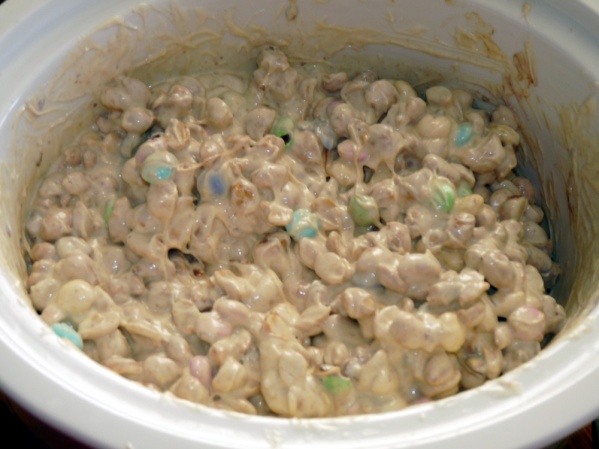 Stir in M & Ms, reserving 1/2 cup to place one on each mound later.

I added most of the bag of M & Ms, reserving 1/2 cup to tuck on top of each little candy mound later. I stirred well.  I noticed some of the candy had cracked and I had brown chocolate streaks in my candy.  Oh well.  It would still taste good. 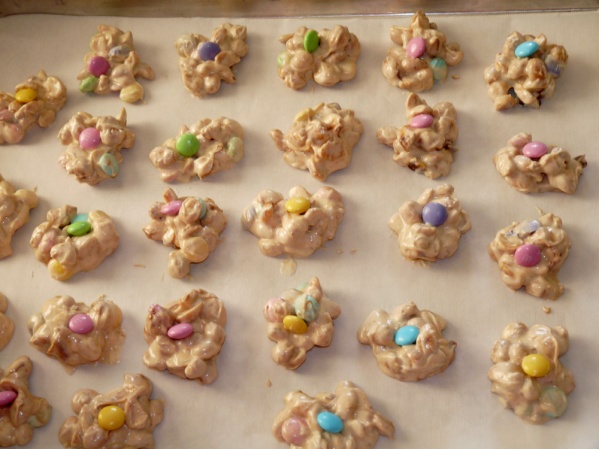 Use a small cookie scoop to scoop candy into little mounds, placing them on parchment paper covered sheet pans. My batch made 96 candies.

I laid parchment paper out on baking sheets and used my small candy scoop to scoop a tablespoon of candy and plopped it down in rows on the sheets. This was easy and fun!  Occasionally I stopped and tucked an M & M on top of each mound. The sprinkles would have made the candy even more colorful but at $4.00 a jar I winced. I don’t make pastel anything for Easter as we are usually traveling. And as I said, I don’t like the crunchy bits on top of cookies and cupcakes so these would have to be pretty enough. 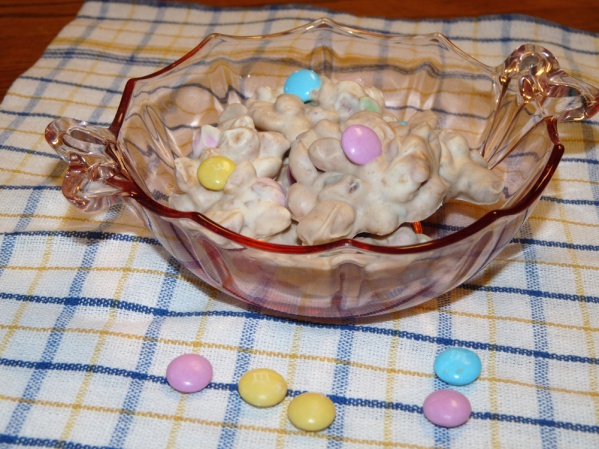 My candies weren’t totally white due to the melting of some M & Ms, but as the little mounds hardened they were more opaque and you could see the colored candies better. 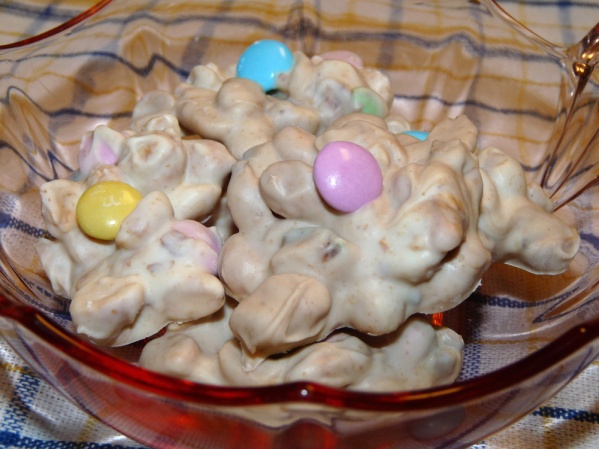 I ended up with 96 candies and let them set up for an hour before storing in containers. I was going to give them to family and friends before the holiday. Neither my P.S. or I need to eat that much candy. His belly and my backside will thank me.

He did suggest I should add Cheerios to them next time.  I don’t think they needed anything else, they were delicious as made!

Adapted from The Slow Roasted Italian

One thought on “Easter Crockpot Candy” 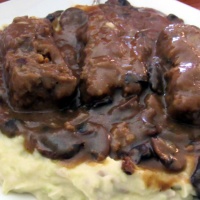