I’ve mentioned I couldn’t cook anything but a fried egg when I got married.  Luckily my P.S. (Patient Spouse) had quite a bit of experience in cooking food for himself so he taught me the basics.  His mother, Grandma Mavis, had a few dishes that are still his favorite to this day.  One of them is scalloped corn.  Her recipe was the best I’ve ever had.  It was one of our holiday go-to dishes for years.

I haven’t made the scalloped corn in a decade or more.  Once we discovered how to make corn pudding in a crockpot, that became the favored corn recipe in the family.  The two recipes are very different however, and both deserve to be  immortalized on my blog.  Grandma Mavis’s recipe has lots of butter and saltine crackers.  It’s a richer version than the crockpot corn pudding that uses a boxed cornmeal mix.  I’ll blog that one at another time. 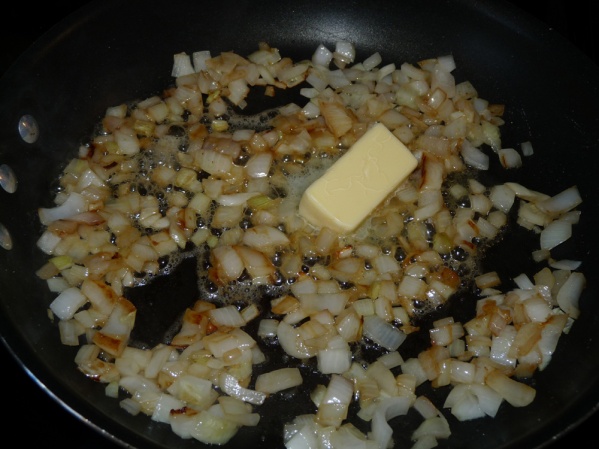 I began the recipe by sautéing the onion in a drizzle of oil, stirring occasionally until the onion was translucent and just beginning to brown. 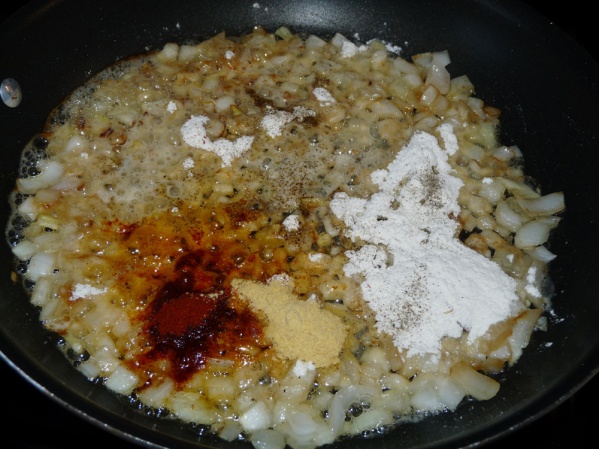 I added the flour, a generous shake of black pepper, paprika and dry mustard. I stirred well and let it cook for a minute or two.

I slowly stirred in the milk until the mixture began to thicken. I added the cans of creamed corn and stirred well. 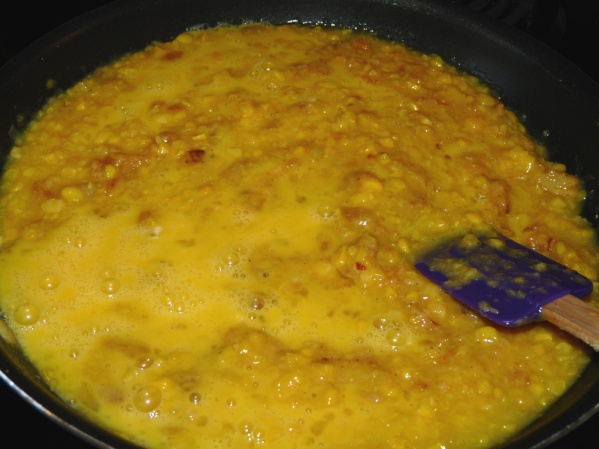 Stir in milk and cook until mixture thickens. Stir in corn. Stir in beaten eggs, taking care not to scramble them.

I carefully stirred in the eggs, taking care to stir constantly so that they did not scramble.

I melted 2 tablespoons of butter and stirred it into a bowl filled with the saltine crackers that I’d crushed slightly into smaller pieces.

Pour corn mixture into greased baking dish. Bake at 350°F for 40-50 minutes or until lightly browned around the edges.

I’d sprayed a baking dish and now poured the creamed corn mixture into the dish.  I slid the baking dish into the oven I’d preheated to 350°F. I set the timer for 40 minutes. 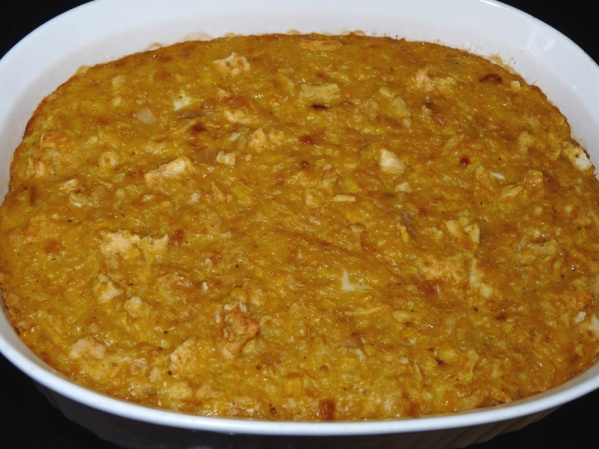 The scalloped corn was bubbling and lightly browned around the outside at 40 minutes. I removed it from the oven and let it set for several minutes.

This dish was exactly how I’d remembered! Rich and tasty with the butter and crackers, it’s a definite comfort food version. The recipe says 8-10 servings but I’d say it’s 4-6 good-sized servings! We like our scalloped corn!

Sauté onion in margarine. Stir in flour, paprika, mustard, and pepper.  Avoid adding salt; the creamed corn and the saltines will provide plenty!

Cook over low heat until bubbly to cook out the raw flour flavor. Gradually add milk and heat to a boil, stirring constantly. Stir in corn.  Carefully stir in eggs, taking care not to scramble them!

Bake uncovered at 350°F until lightly browned around the edges, approximately 40-50 minutes