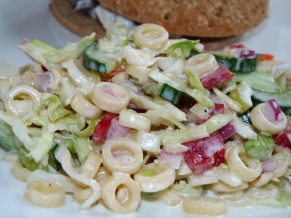 Lately I’ve been in “combining” mode.  I take one recipe, add another recipe, and make a new recipe that is enhanced.  Ok so maybe it’s “enhancing” mode.  Combining my recipe for Krab Pasta Salad with Deviled Egg Macaroni Salad created a new favorite, Krabby Deviled Egg Pasta Salad.  When I found a recipe for a salad that combined macaroni salad with coleslaw, it had to be my next new combination.

Although I liked Chelsea’s idea, I wanted to use my own recipe for coleslaw dressing.  I worked a few years on creating what I think is the best copycat version of KFC’s coleslaw.  We love our version and so with a recipe that is going to mainly be coleslaw with noodles and a few other vegetables, sticking to my tried and true dressing recipe seemed best. 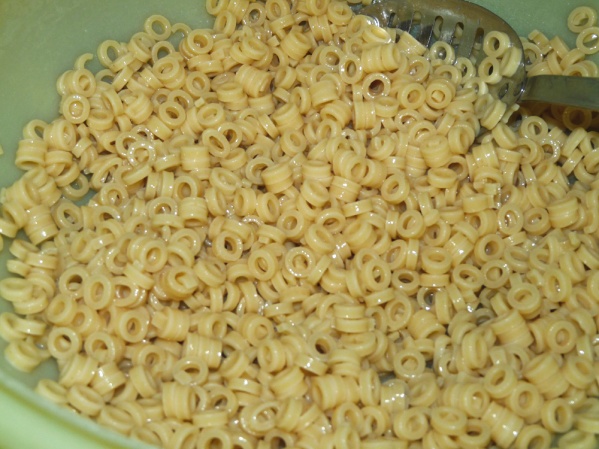 Prepare pasta to al dente, according to box directions. Add to large bowl and toss with 2 teaspoons vinegar.

I brought my salted water to a boil and cooked 2 cups of ring macaroni to al dente.  I didn’t have elbow macaroni so I substituted the rings.  I noticed although the recipe called for elbow noodles, Chelsea had used cavatappi.  I decided they were a bit too large for this salad.  When the noodles were done I drained them and rinsed them in cold water.  I put them in a large bowl and tossed them with the apple cider vinegar.

I’m not sure I’d do the apple cider vinegar step again.  It changed the flavor of my KFC copycat dressing, making it way more acidic.  The vinegar stood out in the flavors of the salad more than I’d like.  You might try it the first time, to see what you prefer. 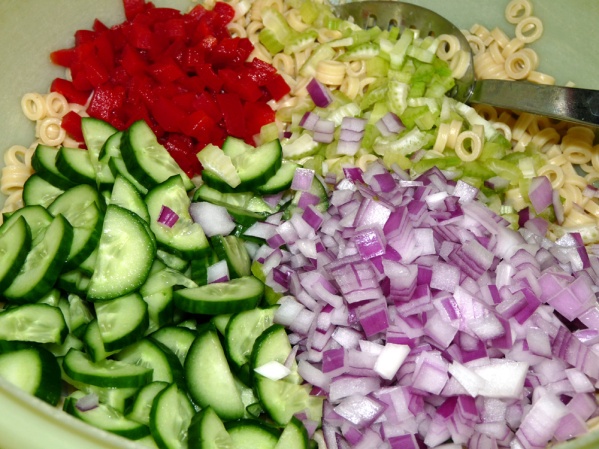 While the pasta cooked I’d cut up my cucumber moons, the red bell pepper, celery and red onion.  Although the recipe called for one red onion, they were all large and very strong.  I settled for 1/2 cup of finely chopped red onion.  Chelsea had cautioned us that the red onion might come on strong and we might want to cut down the amount used in the recipe. 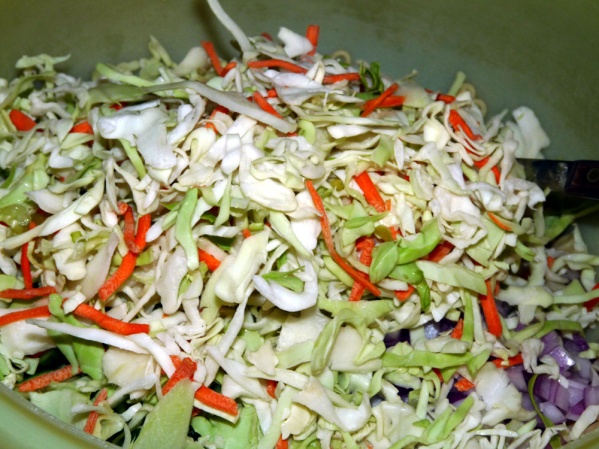 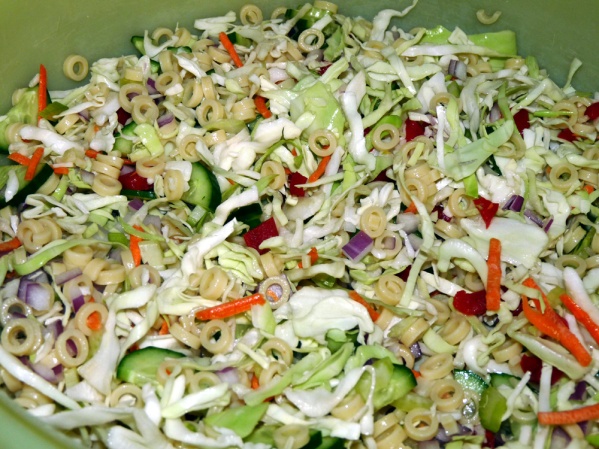 The dressing was simply a matter of measuring all of the ingredients into another bowl and whisking until it was foamy and smooth.  Smooth underneath and foamy on the top, I mean.  That was simple enough, but I was out of horseradish.  Drat.  I only use the ground stuff that doesn’t have added mayo or stuff.  I dashed over to the nearest grocery and they didn’t carry anything but the sauce kind.  The second grocery had my brand and I dashed back to the castle. 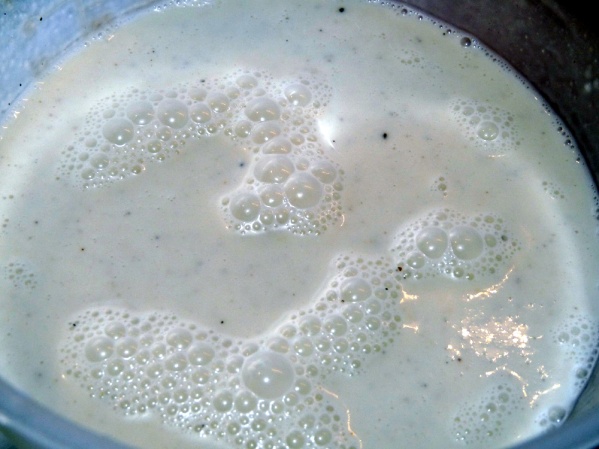 Two teaspoons of ground horseradish whisked into the dressing and it was ready to pour over the vegetables and pasta.  I used a large spoon to mix and fold them together and then placed the salad in a bowl, covered it and placed it in the refrigerator.  I’d stir it every few hours when I remembered it, and we’d eat it for dinner. 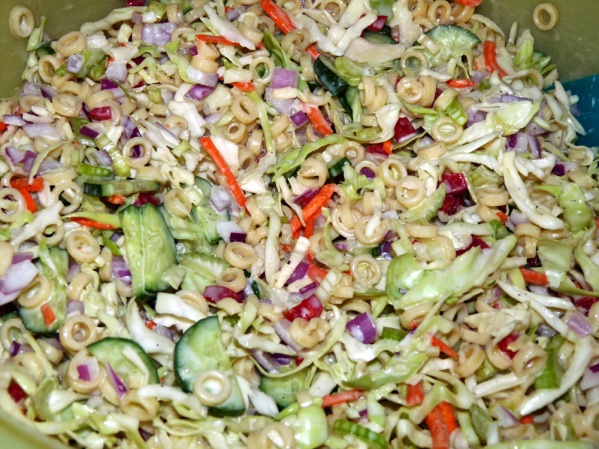 I’ll admit I thought this salad might be sort of.. weird.  I couldn’t imagine how all the crunchy vegetables would meld with pasta.  As it turns out, they melded very well.  The cabbage wilted a bit as cabbage does in salads that are salty.  It wasn’t a bad thing, it was good.  The pasta sort of gets lost in the texture of the vegetables but the overall flavors are wonderful!  We loved it! 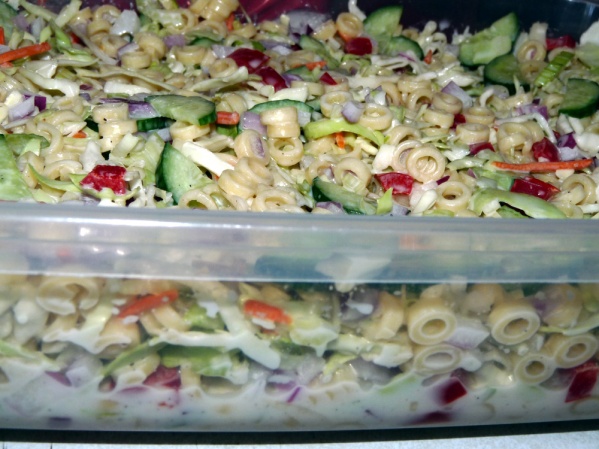 We had the salad for supper with chicken salad on buns and they were a good summer meal.  My P.S. said he loved the dressing in the macaroni coleslaw salad.  I agreed but as I mentioned earlier, it was a touch more vinegary than I’d prefer. 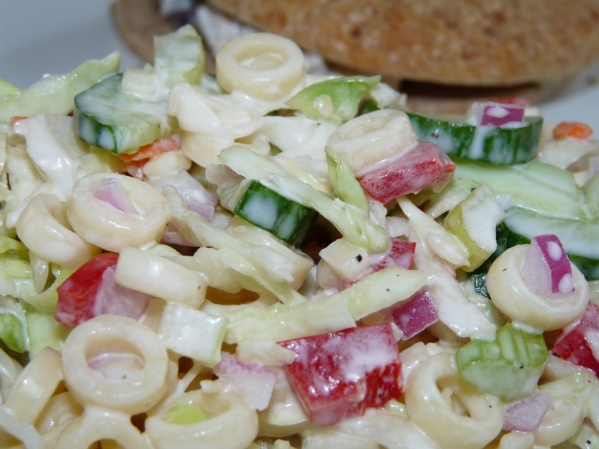 The salad, despite the cabbage that wilted a little, was great the next day and the day after even.  With just two of us here it didn’t disappear as fast as it might if I’d made it for a party or family gathering.  You could even make it a day or two ahead and still have a nice crunch to the salad when served.  That’s a nice bonus.  These last two pictures were taken the second day. 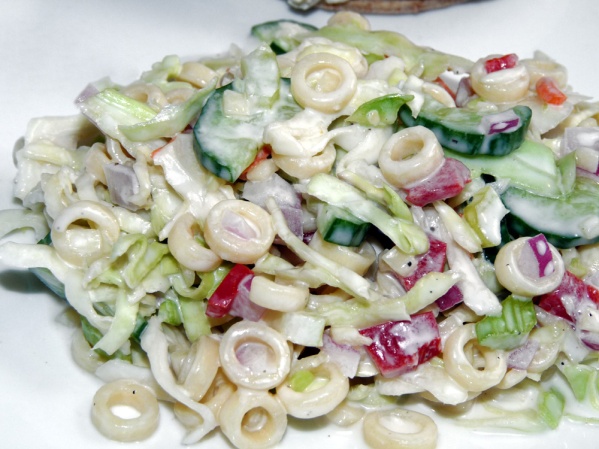 In a separate bowl add dressing ingredients and whisk until foamy and smooth. Pour into bowl of pasta and vegetables and stir well. Cover and refrigerate, stirring occasionally to evenly marinate the ingredients.

Will last for 3-4 days in the fridge and retain some crunch.