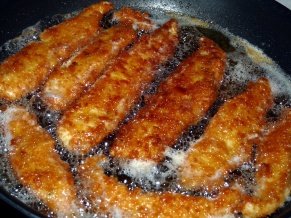 My parmesan crusted walleye post gets so many hits it’s up there in my top 5 posts.  We prefer that recipe over any of my other ones for walleye but this recipe using Ritz crackers caught my eye.  I love Ritz, and happen to have several boxes in the pantry that didn’t get used at Christmas time.  It’s a matter of use them or toss them soon.  I’d rather use them and see how this turns out!

My P.S. (Princely Spouse) and son went fishing recently and caught a couple of walleyes.  It had been awhile since they’d had a chance to get away on a guys day fishing and I was just happy to have the castle to myself.  Bringing home fresh fish is always a bonus.

While I waited for my P.S. to come home, I prepped the bowls for dipping.  I beat 2 eggs in one bowl.  In another I placed the flour, salt, pepper and parsley.  The third bowl contained the Ritz crumbs and some panko bread crumbs.

I placed a large nonstick skillet on the stove with a cup of canola oil.  When my P.S. walked in the door I turned the heat on to get the oil hot.

Dip filets in flour, then egg wash then crumb mixture. Place on plate. Do this with all of the filets.

I dipped each filet in first the flour mixture then the egg mixture.  Finally I rolled them in the crumb mixture.  I placed them on a plate as each filet was coated.

Heat oil in skillet and place filets in oil.

When my oil was hot I placed the largest filets into the skillet first, followed but the slightly smaller filets that would fry faster.  I let them fry until they were a golden brown, then carefully turned them onto the second side.

Fry until filets are browned on one side, then carefully turn and brown on the second side.

The filets were done in about 5 or 6 minutes.  I used a fork to check the center of one filet to see if it flaked nicely.  I removed them to a paper towel lined plate.

The fish crumb coating was crispy and flavorful.  The fish inside was tender and moist.  This was a great recipe!  My P.S. thought it needed a bit more salt.  Maybe I should have done a test piece to determine the seasoning.  I made a note in the recipe to do that next time! 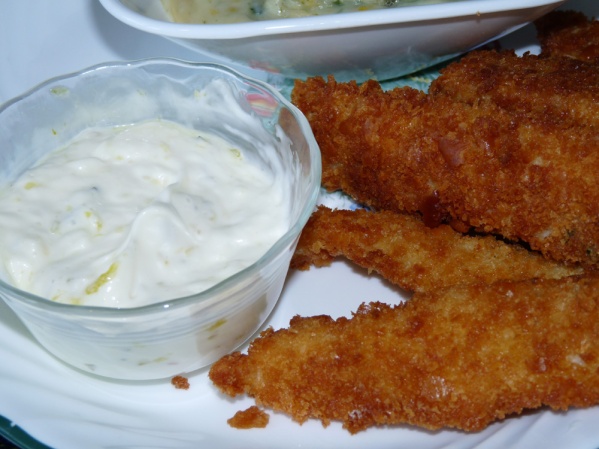 Mix the eggs together in a bowl

Mix together the flour, salt, pepper, and parsley

Mix together the crushed ritz crackers and bread crumbs

Heat the oil in a nonstick skillet

Dredge the fish in the flour

Dip the fish in the egg mixture

Put the fish in the cracker mixture

Put the fish in the skillet and let it fry until browned on the first side.  Turn and brown on the second side.  Check to make sure the fish is flaky and cooked through.

Drain on paper toweling and serve with tartar sauce.

Note: test dip by frying a small piece to check for seasoning before dipping and coating the rest of the fish filets.

Adapted from A Chick Who Can Cook