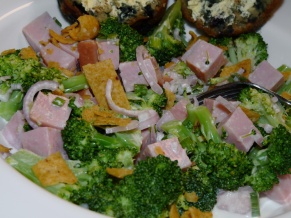 This recipe came about because I saw a picture of a broccoli salad that I thought had Fritos in it.  When I finally bought broccoli and Fritos, I looked at my saved recipe and laughed.  They weren’t Fritos, they were pieces of mandarin oranges!  I should get my eyes checked, eh?  Or read recipes before shopping!  Well poo, I thought that  Fritos would be a good combo and further wanted to add diced ham to make it a meal.   New recipe coming up!

I have a perfectly good broccoli salad recipe that I now realize, in searching, I’ve never posted.  Called ‘Birdseed Salad’, it’s a fairly common recipe around the internet.  I’ve modified the raisins out of it and should post it sometime.  For now, I’m using the basics of that salad recipe and adding my adored Fritos and some ham.  Dinner will be a cold salad that’s fairly light! 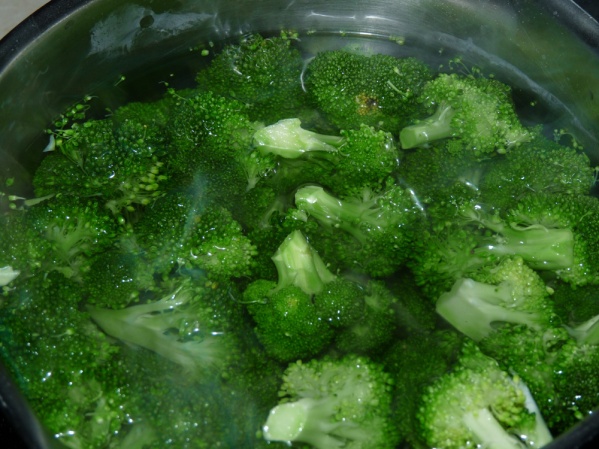 Blanch broccoli florets in boiling water then a cold bath.

I’m not huge on raw broccoli; I like to blanch it a few minutes then put it in cold water to chill.  I did that earlier and refrigerated the broccoli for my salad.  I cut the pieces into little bite-sized trees and blanched them in boiling, salted water.  This keeps them mostly crunchy but also helps the broccoli florets retain their beautiful green color. 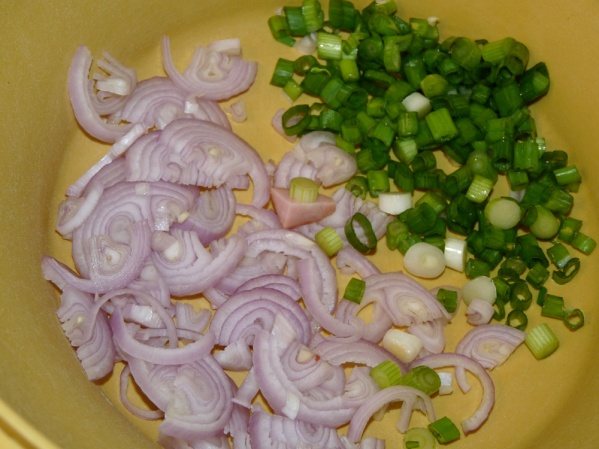 I used shallots in my salad, not having any red onion on hand.  I had white onions but from a previous meal I knew they were particularly strong.  I didn’t want the onion to jump out of the salad with their flavor, hence the shallots instead.  They were long so I thinly sliced them and added them to the bowl.  I also sliced up two green onions and added them to the bowl.  Two types of mild onion would be perfect for my new salad. 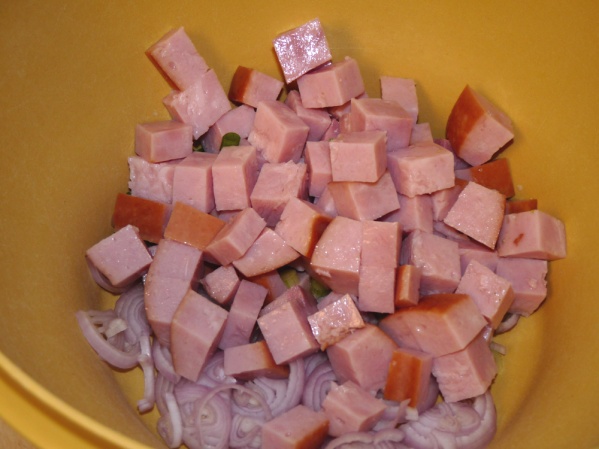 My P.S. and I had just been shopping this particular morning and ham was on sale.  We bought two!  I was busy for a while, dicing and slicing and freezing ham in portions for future meals.  Yum, ham is always a good protein for a fast meal.  And slow meals, like soups or crockpot dishes of course.   I had kept about a cup of 3/4″ cubes of ham in a container in preparation for my broccoli salad.  I added it to the bowl now. 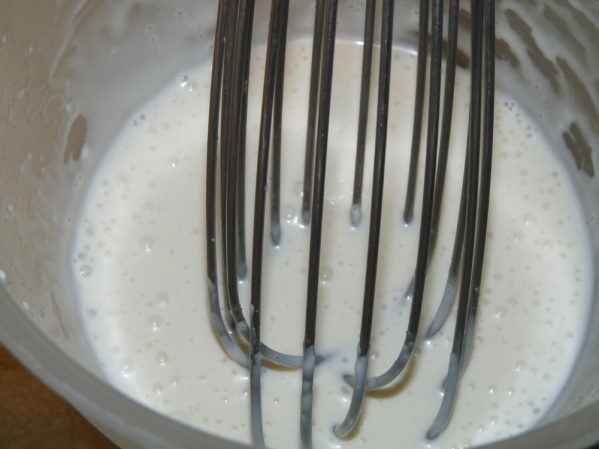 My birdseed salad recipe called for Miracle Whip and I don’t use that in the castle.  I substituted mayonnaise and a teaspoon of lemon juice.  I think that’s a good match since I was also adding cider vinegar to the salad. 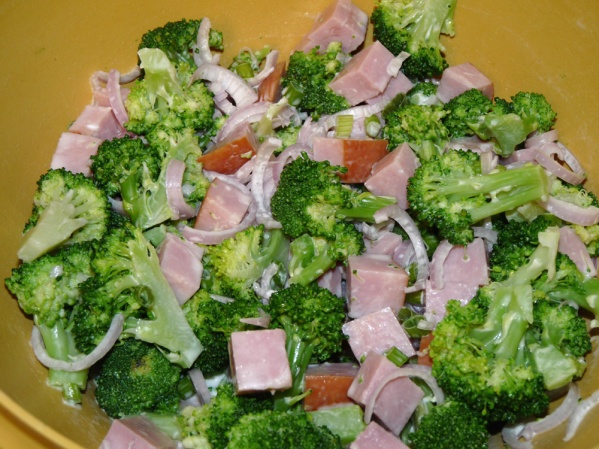 Pour dressing over bowl and stir well. If eating immediately, stir in Fritos.

I put the mayo in a bowl with the cider vinegar, a little sugar, salt and pepper.  I whisked it and added it to the bowl of salad.  I stirred until the broccoli was all coated.  I refrigerated the salad until my P.S. was ready for dinner. 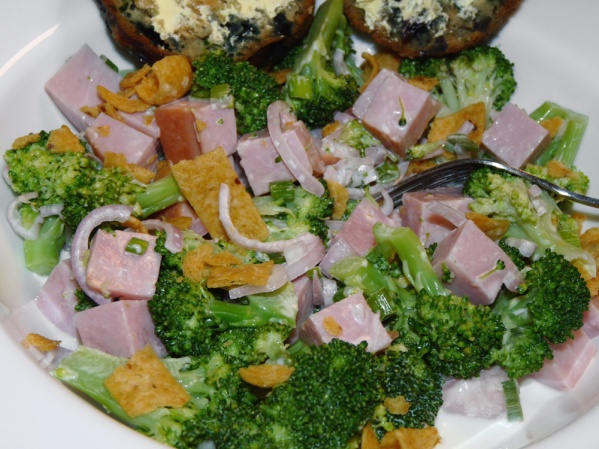 Before plating, I added the Fritos.  I’d crumbled them a little to make the pieces smaller and more likely to adhere to the salad and stirred well again.  Dinner was colorful and done!

Did we love the salad?  We loved it to PIECES!  The broccoli was a little crunchy, the ham was salty and flavorful and the Fritos were a fun crunch. 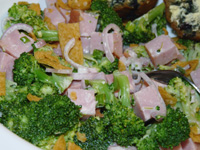 A snappy vegetable and ham salad for those times you want to have a lighter meal.

Blanch broccoli in boiling, salted water for 2-3 minutes. Drain and place in cold water bath until cooled. Place in fridge for an hour or more to chill.

In a bowl, add shallots, onions, ham and broccoli.

In a smaller bowl whisk mayo, lemon juice, vinegar and sugar until smooth. Pour over broccoli and ham bowl and stir well. Refrigerate until serving. 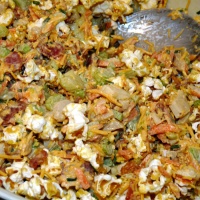