This is one of my favorite fresh vegetable concoctions.  I threw together several fresh seasonal vegetables with bacon, added cheese and it was delicious.  Sometimes I just have to wing it and surprise myself.  Hopefully the result will turn out tasty, but we’re not fussy.  We like our vegetables.  My P.S. is the one who prefers some kind of meat with the veggies. 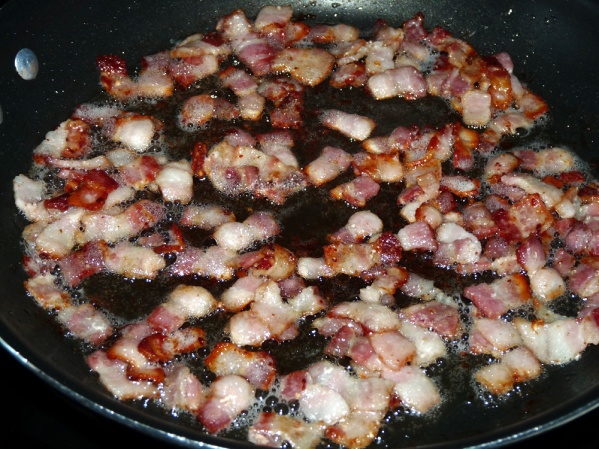 Dice bacon and fry until browned and almost crispy

This particular day I started out with chopping the bacon up and frying it in a large nonstick skillet until it was almost crispy.  When it was nicely browned I pushed it to the side of the pan. 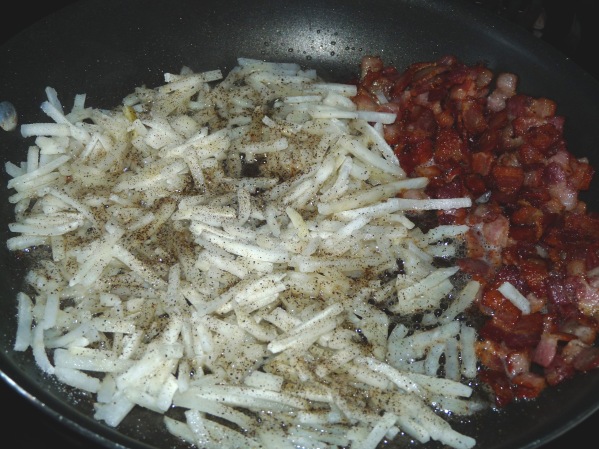 Push bacon aside and fry hash browns until browned and crispy.

I added a handful of frozen hash browns to the skillet, added salt and pepper.  I seasoned each ingredient as I added it to make sure my flavors were all coming together.  I wanted crispy browned hash browns in the dish so I let them fry until they were browning, tossing them occasionally to get them evenly cooked.

Next I added a few cups of cut up zucchini, skins on, with salt and pepper.  The skins were tender rather than tough, so I left them on.

I let the zucchini pieces fry for a few minutes, mixing well so all of the pieces got a little color to them.  I didn’t want to fry them until they were mushy, just a quick browning.

I had a bag of lovely beet greens, complete with stems.  I chopped them into about 1″ pieces and added them to my skillet.  A little more salt and pepper and they cooked for a few minutes.

When the leaves are wilted test the stems for doneness!  You want a little texture to them yet, not mushy. 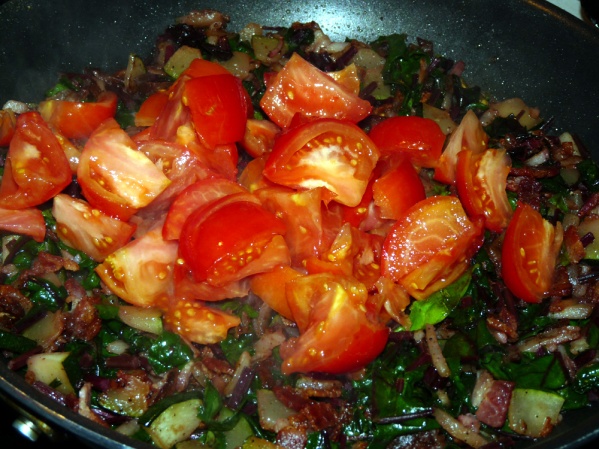 I added a teaspoon of minced garlic and a sprinkling of red pepper flakes and stirred well before adding another fresh vegetable: tomatoes.  We had a handful of smaller heirloom tomatoes from my P.S.’s garden pots that I’d diced into pieces and wedges. 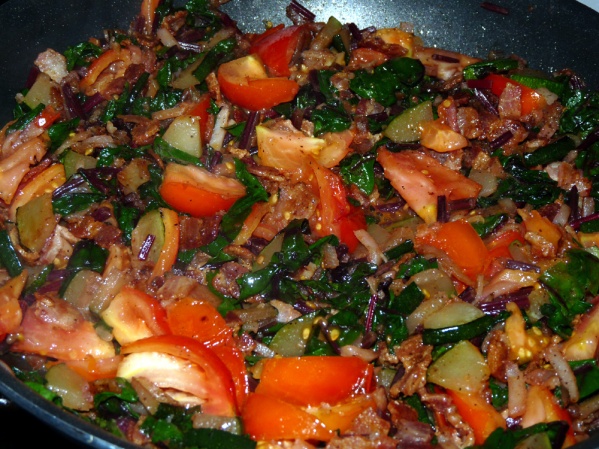 I added the tomatoes and green onion to the skillet and let them cook for just a couple of minutes.  I wanted the tomatoes to maintain some texture and just be heated through. 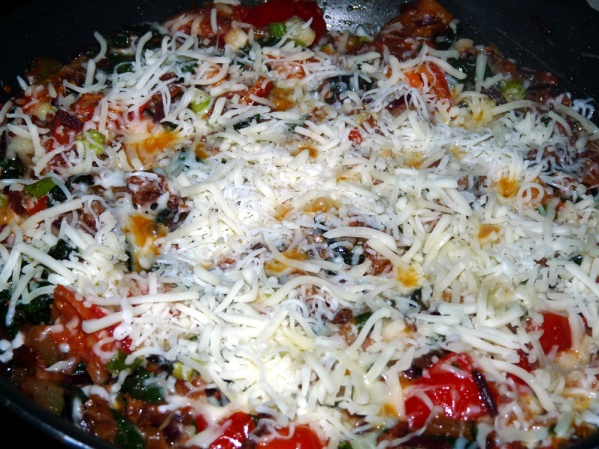 Cheese!  I imagined the flavors coming together with a blanket of Monterey Jack cheese.  I sprinkled a couple of handfuls of the cheese over the vegetables and called it done.  The skillet dinner was a beautiful mess of vegetables, bacon and cheese.  The smell was intoxicating.

We loved every bite of the stir fry.  Whether they were pieces of zucchini, hash brown, tomato or beet greens and stems, it was satisfying.  Simple flavors melded together with the flavors of bacon and cheese are always welcome in our castle.

In a large skillet fry bacon on medium high heat until almost crispy. Push aside and add hashbrowns to skillet. Salt and pepper and leave to brown for several minutes then stir to allow more potatoes to brown.

When potatoes are mostly crisped and browned add zucchini with salt and pepper to skillet and stir occasionaly to brown as many pieces as possible.

Add beet greens and stems and cook for several minutes until greens are wilted and stems are beginning to soften.

Sprinkle with Monterey Jack cheese and when cheese is melted, serve.