Fusion cuisine is cuisine that combines elements of different culinary traditions.  This explains my actions when I ‘d planned to have grilled hamburgers for dinner and it rained all day.  My P.S. looked at me like I was crazy when I asked if he’d grill while I held an umbrella.  I seriously wanted a grilled hamburger.  His suggestion was to pan fry them.  Ugh.  Not as interesting, for sure.

So my next idea was to do something with refried beans.  I had several cans in my pantry and wanted a Mexican type dish with beans and ground beef and cumin.  I’d come up with a clearer idea of the rest of the dish as I cooked.  It would be another episode of ‘Chopped’ in the castle.  I love to meld random ingredients into a dish.  I would use pasta and Mexican ingredients in a true fusion of flavors and cultures.

I started a pot of salted water on the stove and chose a box of radiatore.  The little ridges were almost like a row of tacos, I reasoned.  I know it’s a bit of a stretch but frankly I like their shape.  They’re one of my favorites.  I cooked the radiatore until just al dente.  I wanted them to cook a bit more in the sauce and not end up super mushy.

Sauté onions, peppers and green chilies until they begin to brown around the edges. Add seasonings and sauté for several more minutes.

While my water came to a boil and the pasta cooked I dug in the freezer for diced onions, diced yellow sweet bell peppers and diced green chilies.  I’d diced and froze them all during sales events for future use and I was still patting myself on the back.  I must do that more often, it’s so very handy on days like this when rain derailed my dinner plan.

I heated my large nonstick skillet with a drizzle of oil and added the onion, pepper and green chilies.  I let them fry for several minutes until they thawed, released their water and browned a bit. 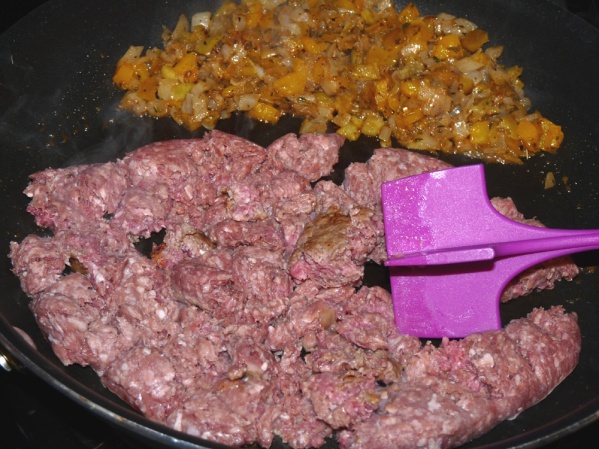 I pushed the vegetables aside and added my ground beef patties to the pan.  I used my star tool to break them up into smaller pieces as they cooked.  I love any excuse to use my star tool.  It’s just.. funky.

When beef is broken up and most of the pink is gone, stir together with vegetables.

When the beef was no longer pink I stirred the vegetables into the meat.  If there is a little pink left in the meat don’t worry, it will cook more as other ingredients are added. 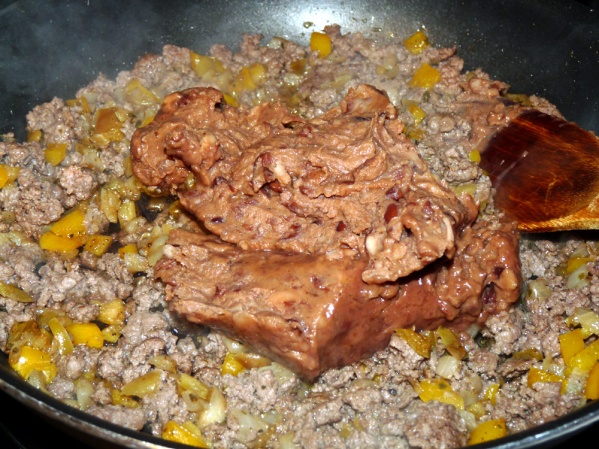 I reached into the cupboard for a can of refried beans and checked the date.  March 2013???  Two more cans with the same date proved that we don’t often think to eat refried beans!  The fourth can was within code and usable.  Cheesh.  I was finally going to use them and I was almost 4 years too late!  I guess some things you shouldn’t buy until you have a recipe you’re going to use them in.  I walked away from the cupboard that had about 20 other cans of assorted beans making a mental note to check dates soon.

Add salsa or tomato sauce and seasonings and stir until no lumps of refried beans remain.

Scooping the can of refried beans that didn’t get tossed into the garbage into the skillet, I added a jar and a half (roughly 3 cups) of homemade salsa to the skillet.  I also added some cumin, oregano, garlic and a pinch of cayenne.  I carefully stirred the skillet until the refried beans were evenly mixed with the other ingredients. 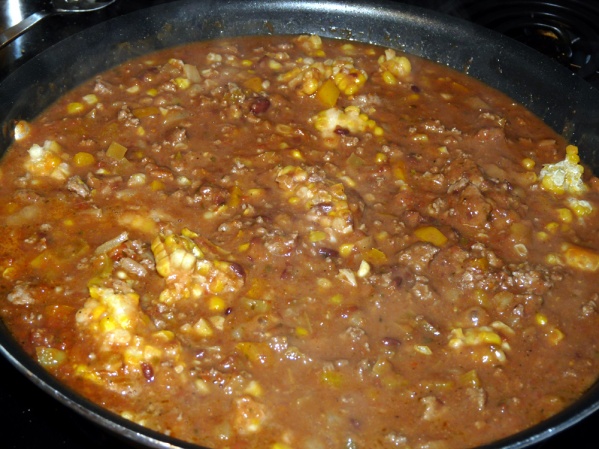 The colors were sort of boring, all that brown and grey.  The skillet smelled delicious but the eye appeal needed some work.  I added a handful of frozen corn from the freezer and chopped some garden tomatoes for garnish later.

My pasta was al dente and drained, and I added it to the skillet, stirring to coat it well.  I let it bubble away for 5-6 minutes and absorb the rich sauce.  I taste tested the dish, added salt and was pleased with the flavors.

Cook several minutes to allow the pasta to absorb the sauce. Add pasta water in small increments if it gets too dry. Stir in tomatoes, reserving some for garnish.

I served the Mexi pasta with plenty of shredded cheddar, some sour cream and diced tomato.  We enjoyed the mild heat and luscious flavors or the skillet dish.  It was truly a fusion of two cultures and the flavors were a good mix.

In a large nonstick skillet heat a drizzle of oil over medium high heat. Add onion, pepper and chilies. Saute 3-4 minutes until browned around the edges.

Push vegetables aside and brown beef, breaking into smaller pieces. Cook until no longer pink then stir into vegetables.

Add refried beans, salsa and seasonings to skillet and stir well. Bring to a bubble.

Add drained pasta to skillet and stir to coat. Let simmer for several minutes, stirring often to allow all of the pasta to absorb the sauce.  Add pasta water in small increments if pasta gets too dry.

Serve sprinkled with cheese, a dollop of sour cream and some diced tomatoes.