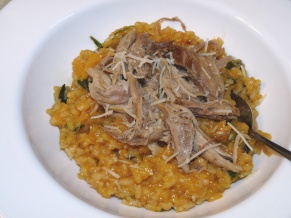 Risotto is one of my favorite foods.  It’s a dish I learned how to make several years ago, it wasn’t something we ate when I grew up.  It takes a little time to stand and stir, add more broth, and repeat until the rice is tender but I think it’s worth every minute.  I like a regular risotto made with wine, onions, broth and Parmesan as well as a risotto garnished with spinach or squash or other vegetables.  This risotto had both spinach and squash!

I had made a 5 lb pork shoulder in the crockpot the previous day and had a lot of onion laden broth leftover. It would make an excellent broth for risotto! I removed the onions, since they’d already provided plenty of flavor and were just limp and wiggly. They’d just be a weird texture in the risotto. I heated the broth and kept it on low on a back burner.

In my large nonstick skillet on medium heat, I added a generous drizzle of olive oil. When the oil was heated I placed about 1/2 cup finely diced onion into the skillet and cooked it until it was just barely beginning to brown. A couple of pieces were overachievers and browned more than the rest of the onion but we’ll ignore that. They’ll taste just fine.

When the onions were barely browned I added Arborio rice to the skillet and stirred it for a couple of minutes until it too was barely beginning to brown.  I know, “barely browned” is a vague term.  Once you’ve made risotto a few times you’ll stop worrying.. this isn’t an exact art.  Relax and go with it!

Add wine and cook until absorbed

Next I added the white wine.  Mmmm.. it smells heavenly already.  If you want to skip the alcohol, add some apple juice or maybe just a teaspoon of some kind of vinegar.  We really want a splash of some kind of acid to make the rice’s flavors pop.

Continue to add broth as each portion is absorbed until slightly al dente.

When the wine is all absorbed I started adding the broth, about 3/4 of a cup at a time.  I use a ladle and two ladles make the right amount per addition.  I stir the rice occasionally and add another round of broth as each round is absorbed.  I don’t constantly stir my rice, I just eyeball it and maybe stir it halfway through each addition of broth.

The rice was still slightly al dente when I added a big handful of baby spinach to the skillet.

Stir until spinach is wilted and incorporated

I stirred the rice and waited until the spinach was properly wilted before adding my squash. 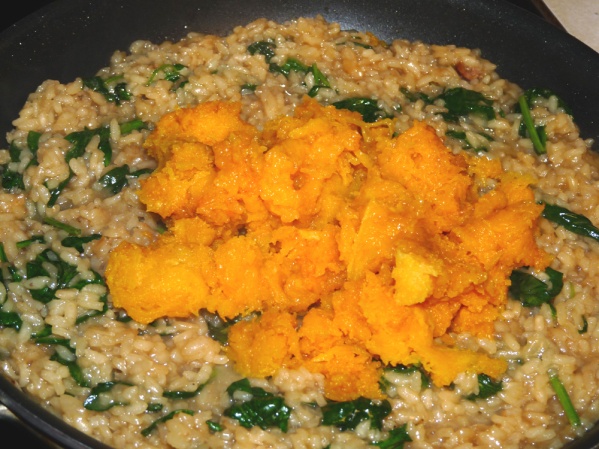 I’d roasted a butternut squash a few days previously and had a generous cup leftover.  I added it to the risotto and stirred gently.  I wanted the squash to still be in small pieces rather than evenly integrated.  I wanted bits of squash in random bites. 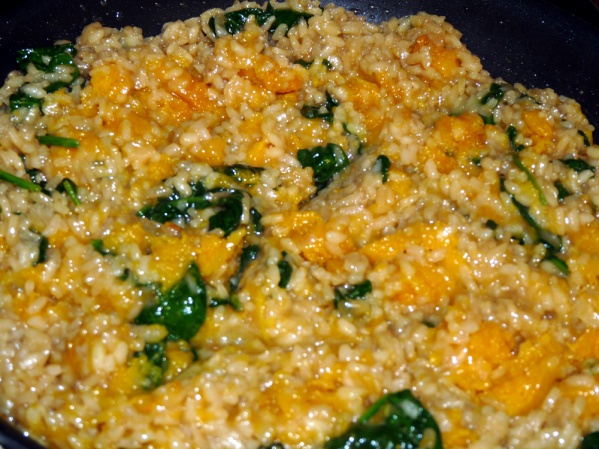 Stir gently to leave small pieces of squash intact. Heat for several minutes until squash is heated through.

I let the risotto simmer on low for about 10 minutes until the squash was heated through.

Taste test for seasoning, adding salt and pepper as desired. Stir in Parmesan and serve.

I stirred in a handful of Parmesan, stirred again carefully and served our risotto for dinner.  I had heated some leftover pork roast for each serving and we loved our meal.

The risotto was nicely flavored with the earthy butternut squash and fresh green spinach.  It was a perfect compliment for roast pork.  I love when risotto flavors come together for a new twist.  This was a blend I’d like to repeat a few more times!

Add wine and cook until wine is absorbed.

Add 3/4 cup of hot broth at a time, cooking until broth is absorbed before adding another portion. Stir occasionally.

When rice is almost done and is still slightly al dente, add spinach and stir until it is wilted.