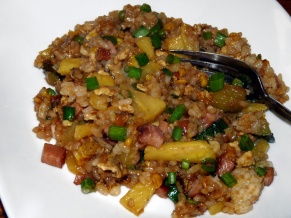 We often eat fried rice here at the castle.  When I make rice for dinner I purposely make extra so I can make fried rice the next evening.  Once I learned to always start out with cold rice, making fried rice was a cinch.  But making it interesting, with new ingredients, prevents boredom.  This time I wanted more vegetables.  I had zucchini to use and the other vegetables were a bonus.

I started with the zucchini, diced into cubes with the skins on.  I heated my large nonstick skillet with a good drizzle of oil and added the zucchini to brown it a bit. 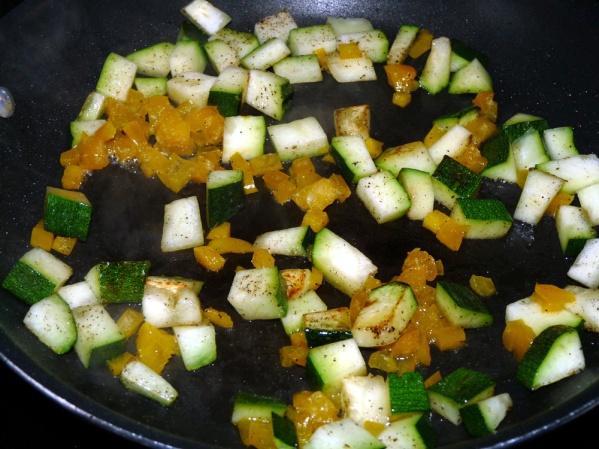 In a nonstick skillet heat a drizzle of oil. Add diced zucchini and peppers. Cook until zucchini is lightly browned.

I added orange sweet bell pepper I’d diced and frozen when they were on sale and let it brown for a few minutes with the zucchini.  This sweetens it up further and gives the pepper a more finished flavor.  I’d salted the vegetables to encourage the moisture to come out, which aids in the browning.

Add peas and corn and continue to sauté.

My next idea came from having used the frozen peppers.  I also found a small bag of frozen corn I’d cut from the cobs and frozen, along with some frozen green peas.  I always like peas and carrots in fried rice but was too lazy to dice carrots this day.  I’d use corn instead.

Add ham and cook until heated through.

I had ham in the fridge and diced a good handful and added it to my skillet of vegetables to brown a little and heat through.

Push aside ham and vegetables and add beaten eggs to skillet. Scramble and break into small pieces.

I’d beaten several eggs and now pushed aside the skillet’s contents and poured the eggs into the pan.  I scrambled them, cutting them into smaller pieces. 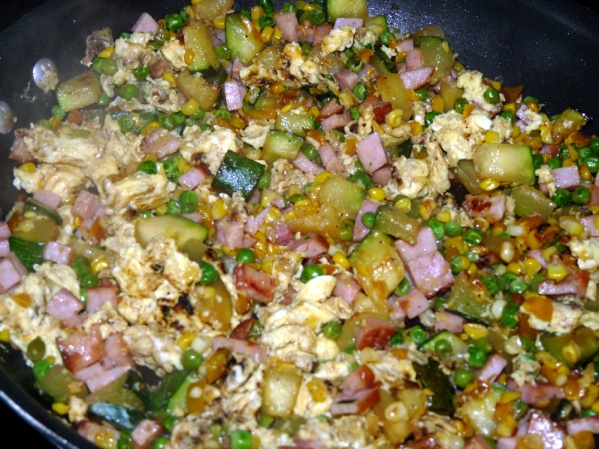 Stir together scrambled eggs and rest of contents of skillet.

When the eggs were done I stirred them into the ham and vegetables. 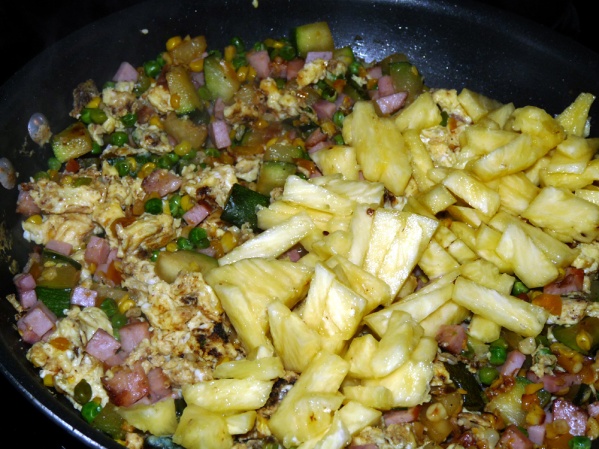 While my ham and vegetables fried I cut a fresh pineapple up and removed the outside layer.  I cut up about a cup into smaller chunks and added it to my skillet.  I’d make pineapple fried rice with extra vegetables.  There, I finally had a theme!

I like garlic in fried rice and it’s easily integrated using a granulated garlic.  I sprinkled it over the contents of the skillet along with a pinch of cayenne and stirred well.  I was ready for the rice! 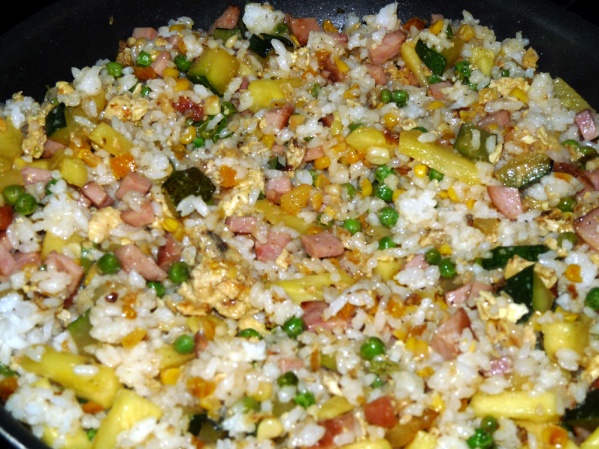 Add rice and stir to break up and evenly integrate.

I’ve mentioned previously how I like to prepare the rice before putting it into the skillet.  I drizzle about 1/4 cup of oil over the rice and use my hand to work it into the rice, separating the kernels nicely.  After doing this again I added the rice to the skillet and stirred.  I also added a handful of chopped green onions, reserving some for garnish. 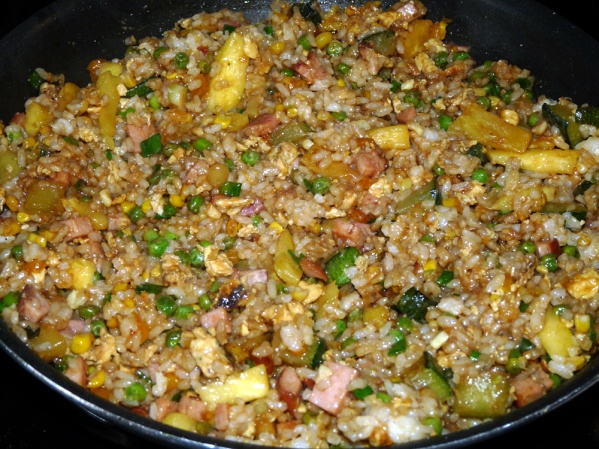 My final addition was a few glugs of soy sauce.  My hand slipped and I ended up splashing quite a bit into the skillet but it ended up being just right.  Whew!  I hate when that happens, but this time it wasn’t a disaster. 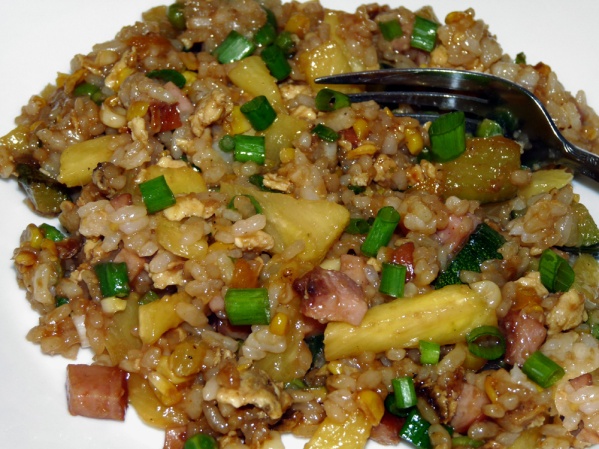 I served the fried rice for dinner and we enjoyed every mouthful.  Having so many vegetables was a nice change from my usual rice dish.  I originally had planned to also add eggplant but unfortunately my eggplant was brown inside and no longer edible.  Poo.  Oh well, maybe next time!

Ham and pineapple fried rice with lots of lovely vegetables.

In a large nonstick skillet heat a drizzle of oil and add diced zucchini with a sprinkling of salt. Fry for 3-4 minutes until browning. Add pepper and fry 2-3 more minutes until they are browning as well.

Add frozen corn, peas, ham and pineapple. Sprinkle with garlic powder and a pinch of cayenne. Heat through, stirring occasionally.

In a bowl, mix rice and oil using your hands until rice is separated and evenly coated. Add to skillet and stir well to integrate with the ham and vegetables.