One of my favorite childhood meals was creamed peas on toast.  I can’t say that we ate it often, but when we did I was in heaven.  My siblings, however, hated peas.  The meal was their worst nightmare, and they may have sat at the table for hours, refusing to eat it.  That’s probably why we didn’t eat it often.  One of my sisters and one of my brothers (I have two of each) to this day won’t eat peas.  I’d eat peas in any way, shape or form!

As my blog’s main goal is to place our family recipes in a place we can all find them, it’s more than time to share a few more family recipes.  Around the holidays is a good time to focus specifically on family recipes.  We’ve just made a lot of family favorites for Thanksgiving and Christmas.  Also I have a hard time finding things to blog, as we make most of the same dishes every year!

But back to my creamed peas on toast.  I don’t have a recipe from my mother, but I have made it in the past and found an easy way to make it simple and delicious.  I used canned peas, as they’re more soft and mushy texture work well with a buttery cream sauce.  Fresh or frozen peas would have too much texture.  We want mushy! 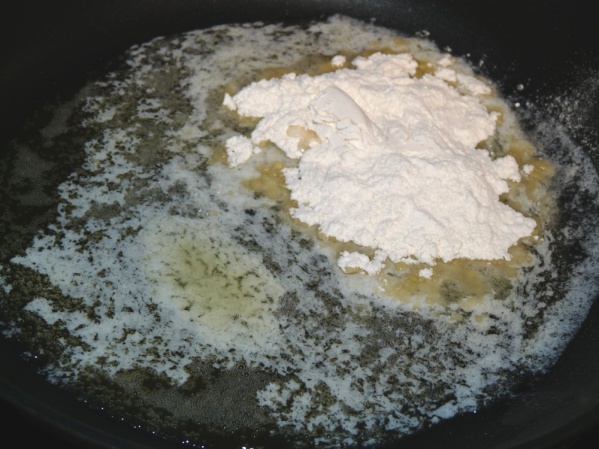 I started with my favorite large nonstick skillet.  I set the heat under the skillet a little over medium and melted 3 tablespoons of butter.  I added 3 tablespoons of flour, stirring and cooking it until it was the texture of sand, about 2 minutes. 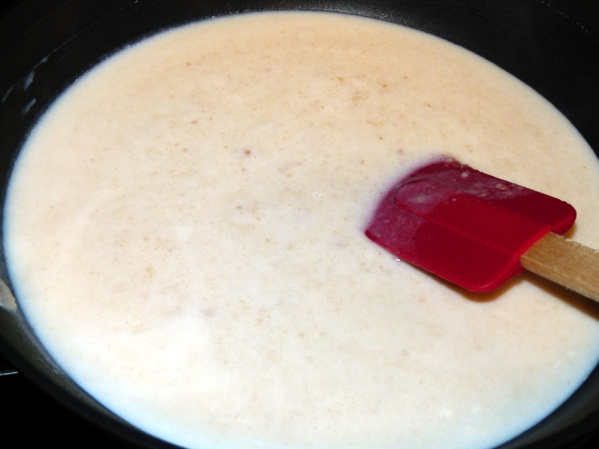 Stir in milk until mixture thickens.

I added 2 cups of milk and stirred until it was smooth and bubbling.  It thickened nicely.  Sometimes I substitute a little heavy cream for some of the milk.  That makes it even more rich and creamy.  Again, you can tweak as you wish.

Stir in peas. I prefer canned peas in this particular dish.

I drained the can of peas and added them to the skillet.  Another minute or two and they were heated through.  I taste tested for seasoning and added salt and pepper and my creamed peas gravy was ready. 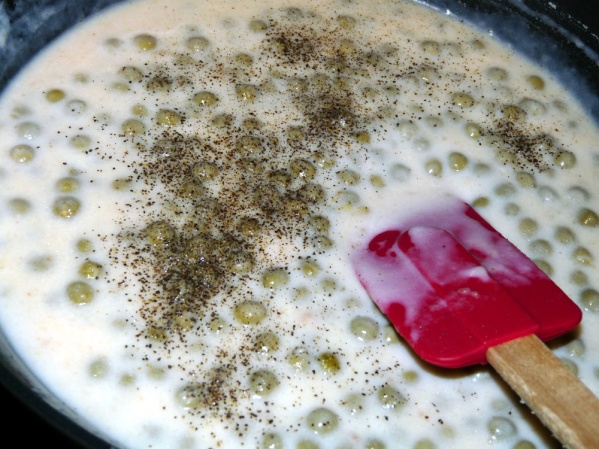 Add salt and pepper to taste.

As I made my creamed peas I’d made several pieces of toast.  I used white bread, as I didn’t want any wheat flavor to interfere with my creamed pea gravy flavors.  It’s just a preference, you could use whatever bread you like of course.

Toast and butter bread of choice. I used a sourdough bread this time.

I plated my toast, poured the creamed peas gravy over the slices and was ready to devour my lunch.

I wasn’t disappointed, creamed peas on toast was just as I remembered- creamy gravy full of flavorful peas on crispy bites of toast.  I was transported back to being a kid, loving the simple meal.  It’s a fast meal as well, although full of carbs and probably not something you’d want to admit to eating to your dietician.  It’s a rare treat. 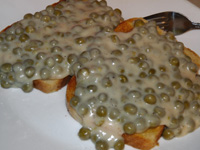 A favorite childhood treat with simple flavors that can be whipped up in no time!

In a nonstick skillet melt the butter. Add the flour and stir for 2-3 minutes until flour is the texture of sand.

Stir in milk until smooth and bubbling. Gravy will thicken.

Stir in drained can of peas and cook for 2-3 minutes until heated through. Taste test and add salt and pepper as desired.

14 thoughts on “Creamed Peas on Toast” 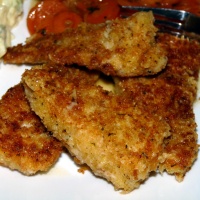